There’s a shipbuilding resurgence underway in Canada that’s being driven by a long-term multibillion dollar government initiative to rebuild the federal fleet of Royal Canadian Navy and the Canadian Coast Guard vessels and breathe new life into the country’s shipbuilding industry. Seaspan’s Vancouver Shipyards is an active player.
Under Canada’s National Shipbuilding Strategy (NSS), the Vancouver, B.C. shipbuilder was selected in 2011 to deliver several types of large non-combat vessels for the Navy and Coast Guard, while another shipyard on the East Coast, Irving Shipbuilding, will deliver the combat ships. The NSS also calls for a number of smaller vessels from several other yards throughout Canada.
Vancouver Rising
Seaspan Shipyards won the open competitive bid to build non-combat vessels over 1,000 gross tons in Vancouver. That backlog currently includes three Offshore Fisheries Science Vessels (OFSV), one Offshore Oceanographic Science Vessel (OOSV) and one Polar Class Icebreaker for the Canadian Coast Guard, plus two Joint Support Ships (JSS) for the Royal Canadian Navy. The company anticipates further work on non-combat vessels to be defined by its federal customer in the coming years.
This current and future activity is revitalizing an entire industry by creating new work up and down the shipbuilding supply chain. To date, thanks to its NSS-related work alone, Seaspan has $600 million in committed contracts and engaged approximately 500 Canadian firms, the vast majority of which are small- and medium-sized enterprises. 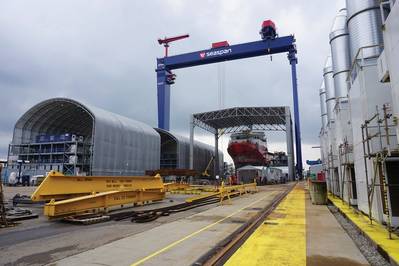 Photo: Eric Haun“The National Shipbuilding Strategy is causing a rebirth of shipbuilding on the West Coast, simply put,” said Tim Page, Vice president of Government Relations at Seapsan Shipyards. “We have not had a backlog of work ever such as we have today, nor have we had the promise of that backlog of work because there has not been a federal, national commitment to a long-term strategic recapitalization program for our maritime forces probably since the Second World War.”Prior to the NSS, the shipyard had mostly built tugs, barges and ferries. “Currently, we have three active and concurrent and shipbuilding programs underway, which is a rarity in North American shipbuilding,” Page said. Seaspan is well into the program to produce the three fisheries science vessels, and in June it began building the first of two joint support ships. The yard is also designing, planning and procuring long-lead items for our oceanographic science vessel. Work to produce a polar icebreaker is also due to join the mix.

Lamarre Named CEO at Seaspan Shipyards
Mark Lamarre, who most recently served as CEO of Australian Shipbuilding Company (ASC), has been named CEO of Seaspan Shipyards effective immediately. Lamarre succeeds Brian Carter, who stepped down to pursue other opportunities. Lamarre’s appointment follows recent Seaspan Shipyards additions to the senior leadership team, including Jari Anttila (previously with Philly Shipyard Inc. and Meyer Turku in Finland) as COO and Christof Brass (previously with Airbus Group SAS) as CFO.
Lamarre is an experienced shipbuilding executive with more 30 years of experience in operations, and business transformation. Most recently, he served as CEO of ASC PTY LTD, where he led a $600m shipbuilding division of ASC engaged in the engineering, construction, activation and post-delivery support of Naval surface combatants to the Australian Navy. Previously, Mr. Lamarre worked at Bath Iron Works, the $1.2 billion shipbuilding business unit of General Dynamics Corporation, where he spent 24 years in increasingly senior roles, responsible for areas such as production engineering, planning, procurement, material control and operations, among others. Lamarre holds an MBA from Boston University’s Questrom School of Business and a Bachelor of Arts. 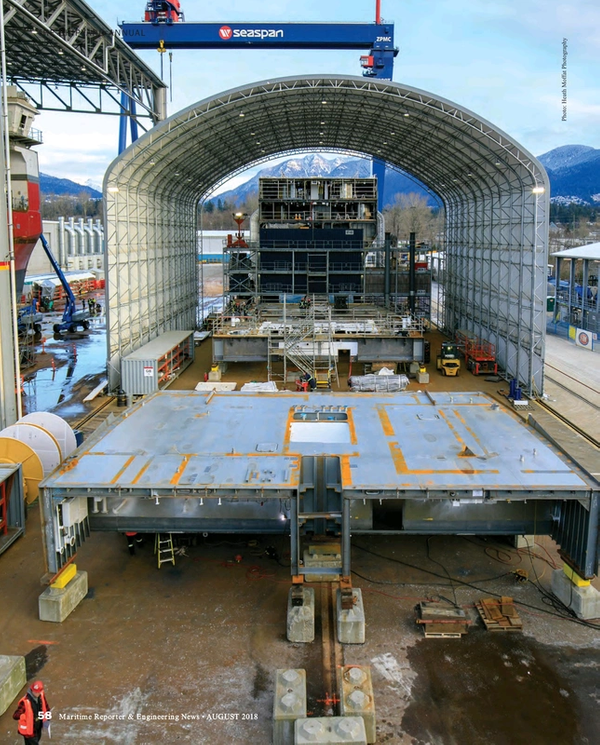