Art Regan, who has been the Executive Chairman at Genco Shipping and Trading (NYSE: GNK) since October 2016, personifies the new type of shipping executive, savvy on all things maritime (he is a graduate of SUNY Maritime College at Fort Schuyler) coupled with a keen understanding of market dynamics.

Regan commenced his maritime industry career at sea, rising through the shipboard officer ranks completing as a Master Mariner during a more than ten-year period sailing on oil tankers and dry bulk vessels. From there Regan negotiated deals for StenTex and Stena Bulk, before taking the founding role of President and CEO at Arlington Tankers, a Stena offshoot at the leading edge of the wave of Initial Public Offerings gathering momentum in 2004.

Following the acquisition of Arlington by General Maritime Corp in an all-stock deal in 2008, Regan set a course to align with the beginnings of another wave of fresh capital into shipping - the inflow of financial investors, notably packagers of private equity funds. In 2010, Regan moved over to Apollo Global Management, where he launched their ship management and advisory entity, Principal Maritime, which serviced maritime investment holdings in the Apollo family. At that time Apollo had already invested in the maritime sector through their recapitalization of Norwegian Cruise Lines. At Principal Maritime, Regan created Veritable Maritime Holdings, a Suezmax crude oil tanker investment, and Princimar Chemical Carriers, an owner of specialty chemical tankers. as well as monitoring supplemental shipping investments throughout Apollo which included a range of structures including Preferred Equity, Mezzanine debt, First Lien Mortgages and acquisition financing across both an International and U.S. Jones Act scope.

Financial investors are always looking for eventual exits for their investments since the funds they are responsible to invest typically have fixed periods of investment duration. In 2014, Principal Maritime looked to float the Suezmax tanker investment through an Initial Public Offering, however Apollo withdrew from the process as public market valuation at that moment did not meet Apollo’s price expectations.  In late 2015, as the cyclically volatile tanker market was cresting, Regan was able to successfully complete the sale of Apollo’s dozen Suezmax vessel bloc to Teekay Tankers (NYSE: TNK), for $662 million, with the majority of proceeds received in cash along with a portion of Teekay Tankers stock, which was then later sold prior to yearend 2015 at a premium for Apollo versus the fleet cash sale price.

While the tanker market, fueled by outsized cargoes being moved and stored, was doing well through 2015, the dry bulk shipping market at the time had been languishing due to oversupply of vessels. Huge building programs in China came out of the super-cycle of 2004 – 2007, but also in response to mini-boomlets in 2010 and 2013. Genco Shipping & Trading, which originally went public in shipping’s continuing Initial Public Offering (IPO) boom in 2005, was a high flier stock for a while, sinking down to earth as the overall dry bulk fleet on order began to rival the aggregate tonnage actually on the water. In 2014 Genco declared bankruptcy and through that process and subsequent company debt to equity conversions, came under the significant ownership of a number of financial investors, including funds managed by Centerbridge Partners, Strategic Value Partners, and Apollo Global Management.

Around 2016, many traditional funding sources, notably European banks, began pulling back from financing shipping companies, with some exiting the business completely and selling their loans on to distressed debt investors.  And while the dry bulk freight market had experienced a welcome period of improvement during late 2014 and into 2015, the freight rates were not enough to keep the sector away from serious financial distress once again, and as 2016 began the sector was in dire need of financial restructuring.

After the 2014 bankruptcy, Apollo had already emerged as the third largest shareholder (with 10.7% of Genco’s shares), following the earlier conversion of debt into equity (shares).  The new shareholders continued to seek changes in how the company was run, resetting the Board as Apollo (and a handful of other financial players) anteed up and purchased additional shares, an important enabler for Genco to enter into a major refinancing of its bank debt (simplified, with three lenders instead of nine). By this time, Apollo’s equity stake in GNK had grown to nearly 16%. In October, 2016, Regan, who had joined the Board earlier that year, was elected the Interim Executive Chairman. At that time, he began setting Genco’s new course; the correction took more than a year.

Art Regan describes the new strategic course embarked on by the Board, in late 2016. “The plan had several steps; first to recapitalize Genco through a substantial equity injection, which allowed its commercial banks to waive debt amortization for enough time to allow the revitalization plan to take hold, in what was anticipated to eventually be an improving freight market. Next step was to orchestrate conversion of the company’s commercial strategy from passive to active customer engagement.”

On the last point, Regan tells Maritime Reporter, “Since the end of 2016 Genco has been developed into an active commercial platform, servicing both major and minor bulk commodity producers and end users directly.” This contrasts with a previous fleet deployment strategy of leaving chartering decisions with outside managers of pools. Regan adds that technical management was also tuned up: “…Genco directly manages selected key functions such as fleet dry dockings, while leveraging the broad scale of experienced outsourced managers to administer crewing functions.”

By early 2018, as dry bulk prospects had brightened significantly, the company was ready to move offensively and take advantage of its new strength. Regan tells Maritime Reporter: “With Genco rebuilt, we were able to complete a debt refinancing in June 2018 that allows Genco to seek growth initiatives as we see opportunities. Taking immediate action according to this well-structured strategic plan, Genco raised $114 million of additional equity in June through issuance of new primary common shares.” Speaking at the June 2018 Marine Money conference, Genco President & CEO John Wobensmith, a company stalwart who was previously its Chief Financial Officer, said “The handcuffs are now off,” referring to previous financings that had prohibited dividend payments and vessel purchases.

The investment community was impressed at Genco’s actions; analysts at Fearnley Securities, in a May 2018 report, described Genco as “Joining the big boys club.” In their report, they pointed to 2018 Q1 results exceeding expectations, and the new lower cash break evens as a result of the debt refinancing package. After commenting on the significant amounts of cash on hand (built up in 2017 into mid-2018, prior to the equity raise), the analysts said: “The company is ideally positioned to capture on the upturn we expect to see unfolding over the next three years.” Other analysts agreed; for example, Jefferies- with a “Buy” on GNK shares, said: “We believe GNK is very well positioned to benefit from the strengthening dry bulk shipping market via its large and diverse fleet, 100% spot market exposure, & industry-leading balance sheet.” Evercore ISI also praised the company’s actions, writing: “GNK further  increases its operational leverage to an improving dry bulk rate environment, while maintaining  modest financial leverage.”

By mid-2018, a year and a half worth of planning was now being converted into actions, with Regan telling Maritime Reporter: “The new equity has already been put to work as part of the funding to be used to take delivery of six recently acquired vessels into the Genco fleet”. The vessels include four modern Capesize Eco vessels and two modern Ultramax Eco vessels which they expect to take delivery of during the third quarter this year. Genco are also selling older vessels at attractive price levels. As this article was going to press, Genco announced a new credit facility (along with cash in its coffers) would be used to fund these purchases.

Regan on Smoothing Maritime Cycles
Besides his ship chartering and financial smarts, Regan has by necessity become an expert at reading the likely twists and turns in shipping markets, and building strategies around prognostications developed with his teams. Arlington’s mixed tanker fleet of crude and product tankers, sold in 2008, and Principal Maritime’s Suezmaxes, sold in 2015, both came at times of upward spikes, which by definition, don’t linger. Regan told Maritime Reporter that “In the cyclical shipping industry the general trend of ton mile trade increases and global demand for commodities and energy has been reliable and positive.” Like the savviest of the market analysts, Regan notes the importance of the supply side, adding that: “It has been the incremental vessel supply overhang bulges that have disrupted the consistency of shipping markets”.

Regan on New Fuel Rules
“Historically significant regulatory changes in vessel operation have had long lead times for the industry to prepare,” said Regan. “The IMO 2020 fuel requirement change was initially being discussed as a 2025 event, so the acceleration to 2020 has compounded the difficulty in shipowner considerations, especially as the shipping industry is still trying to integrate the ballast water treatment system costs and operation. And we’ve seen how challenging it has been technically to find equipment solutions that work effectively and reliably for ballast water treatment.”
He stresses the importance of the human element, telling Maritime Reporter: “Industry is always ready to adapt quickly and proactively when safety of life of seafarers is the objective. And shipowners are always decisively supportive of installing such safety improvements even when that requires equipment retrofits at their own cost without consideration of the vessels age.” And, finally, he views shipping in the context of broader societal trends. He says: “The change in IMO marine fuel sulfur standards is essentially driving the international maritime industry to quickly catch up with the universal industrial trend towards air quality improvement. The most natural and consistent expectation would therefore be the increase of supply of compliant fuels to match the demand. I think that will naturally occur in time.” 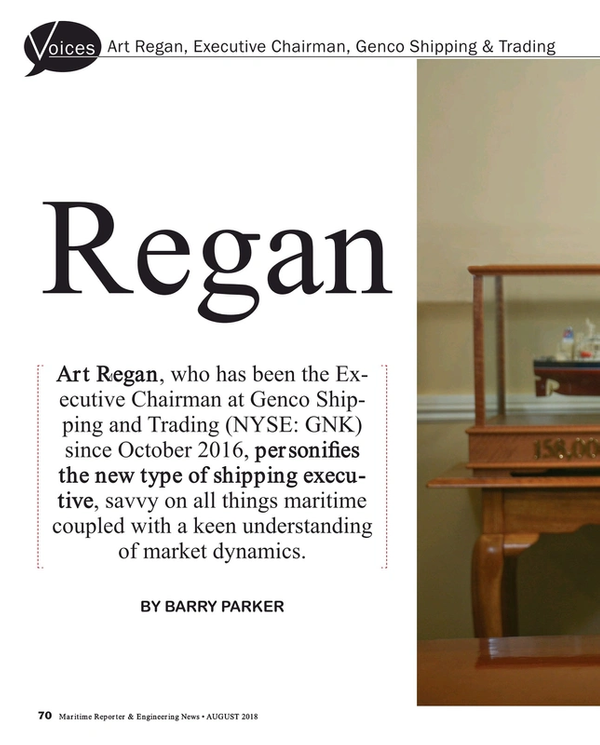