Ship owners can derive imperative business and operational insights from integrated, real-time data which is readily accessible via a single platform, especially if it can be taken away with you, writes V.Group CIO Stephen Macfarlane
For the maritime industry, these are exciting and momentous times, with digitalization as an emphatic and decisive pivot point in operational, business and environmental sustainability. The potential is now incontestable for businesses along the entire length of the supply chain to effect the requisite changes and witness substantial digital advantages – or, conversely, to run on the spot and be rendered uncompetitive and irrelevant by degrees, eventually and inevitably being left for dead. To put the industry’s future prospects in the most bluntly realistic terms, maritime companies across the board are effectively poised to stand or fall depending upon how prepared they are to engage with the ongoing digital transformation which is already revolutionizing every aspect – from vessel design, shipbuilding, operational and navigational duties right through to port communications, financial transactions and the myriad responsibilities which constitute ship management.
If there has been a tacit reluctance in certain quarters to abandon dyed-in-the-wool, tried-and-tested manual working practices, one of the most frequently cited concerns revolves around information sharing; the hot-button topics of a highly competitive market and of course cyber security. Fears pertaining to the perceived vulnerability of sensitive, business-critical data (and the conceivably harmful knock-on effects of a data breach) are understandable – but secure data encryption is an ever-evolving and increasingly sophisticated science, with appropriate protocols in place to rapidly contain damage and, as far as possible, eradicate threat.
A related concern for traditional ship owners who might be unwilling to pass their business operations on to ship management firms in the digital realm is an anxiety that they may appear to be ceding control and compromising transparency. Ship owners with such an entrenched mindset would obviously require verifiable reassurance that they would be able to visibly control and oversee operations at every level and every stage, were they to be convinced into taking the digital plunge with partner organizations. It shouldn’t need pointing out that shipping is now part of a far broader and more extensive supply chain; and the consequent need for ship owners to actively address this evolutionary development is pressing.

Digital Management
Arguably, the most persuasive element in driving late adopters to consider a properly-integrated digital strategy will be the significant difference it can make to the bottom line. In a jittery and fickle marketplace where the pips are being squeezed from every direction, ship owners will benefit by seeking the services of ship management providers who can radically cut costs and increase efficiency with a portfolio of digital solutions built upon the smart leveraging of “big data”. With a fully-functioning ship management system in place, the long-term value of obtaining detailed, real-time financial information about vessels, fleets and business dealings – invoices, transactions, etc – is incalculable. Digital management systems can also streamline major HR tasks such as crew sourcing, crew recruitment and assigning roles – while also keeping crew member themselves in the loop with apps designed for their use. In addition, the deployment of a completely integrated digital management tool means that business performance can be closely monitored, goods and services transactions controlled and ratified, and regulatory compliance managed. The latter aspect is of increasing pertinence in a climate, literally, wherein environmental laws are of necessity becoming more numerous and more stringent.

The Digital Advantage
It stands to reason that having all of these capabilities integrated within the same platform, with a common taxonomy, confers innumerable practical, logistical and operational advantages, with a view to business growth and sustainability. To this end, V.Ships (the maritime arm of V.Group) took an early lead in the marketplace with ShipSure, a bespoke, fully-integrated information management system, and are now looking to consolidate this lead with the open cloud-based ShipSure 2.0 platform, with an app version providing a mobile interface. Available on Windows PCs, Android and iOS tablets and smartphones, ShipSure 2.0 has been developed to provide users with secure access to data from their vessels, fleets and commercial affairs. The service is based upon four pillars ¬– finance, crewing, procurement and marine operations – and the implicit advantage of having mobile access to the platform is the ability to obtain data-derived insights for informed decision making at one’s fingertips, from anywhere and at any time.
Suitably equipped with a comprehensive digital management system of this nature on their smartphones, users are able to oversee their assets with a flexibility that would have been scarcely imaginable even in recent years. Business-critical decisions can be assisted and carried out in real-time while travelling; while the ability to clearly and consistently take an overview of areas in which appropriate performance improvements could be made provides an invaluable aid to enhancing operational safety – and, of course, increasing profit margins. Where ShipSure 2.0 is concerned, a digital competitive edge is added by the fact that V.Ships owns the technology and the IT stack, meaning that the platform represents a one-stop-shop as a digital solution, with well over 100 apps serving real-time data to V.Group clients This circumvents the inconvenience and likely technological pitfalls of having to source various, different off-the-shelf systems, then praying that these can be successfully integrated.
Another obvious benefit for ship management providers equipped with a tool such as ShipSure 2.0 is the ability to pass economies of scale, and a comprehensive, joined-up view, onto ship owners who would hitherto have had to chase up several separate teams – operations, procurement, finance, etc – but who would now be able to access all of the same resources from the one convenient and secure platform, even when out of the office. 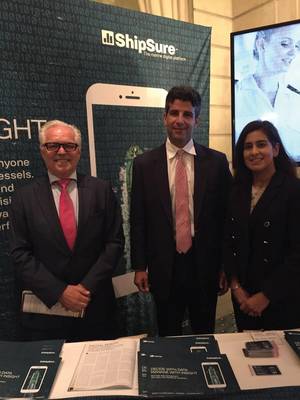 (L to R): Dag Christoffersen, Chairman, V. Ships Norway; Peter Mellis, VP – Strategic Relationships & Business Development, V. Group; and Sharn Samra, Head of Marketing, V. Group. (Photo: Greg Trauthwein)V. Ships Chairman Dag Christoffersen was in New York City to help promote the roll-out of ShipSure 2.0, a fully integrated platform – an app –  which covers all of the ship management functions, including finance, maintenance, crewing, onboard systems and office-based systems and more, fully integrated with full transparency among the stakeholders.Designed and developed by V. Ships, Christoffersen calls ShipSure 2.0 “revolutionary” as it is a “platform that can be downloaded on your mobile phone or tablet, with full transparency and accessibility.”
Designed to be intuitive and easy to use, the system is complete as it seamlessly melds financial and technical (expenditures, from the ship management side) information, providing a readily accessible, comprehensive and transparent financial reporting tool.
The app, which was designed and developed in house by V. Ships and is available for free as an added benefit to V. Ships customers, can be customized to the needs of a specific ship owner. “We have about 300 clients  (representing about 1000 ships) for whom we manage ships and crew, and they all have different requirements,” said Christoffersen, noting that there are some large clients where the company manages 50-60 ships, but the average is 3 to 5 ships. In addition, many are publicly listed companies in New York, London and Oslo with tight deadlines for reporting, “and with ShipSure 2.0 they can send out reports real-time, allowing them to deliver financial details on how the ships are reporting in real time. “This an is extremely important point.” 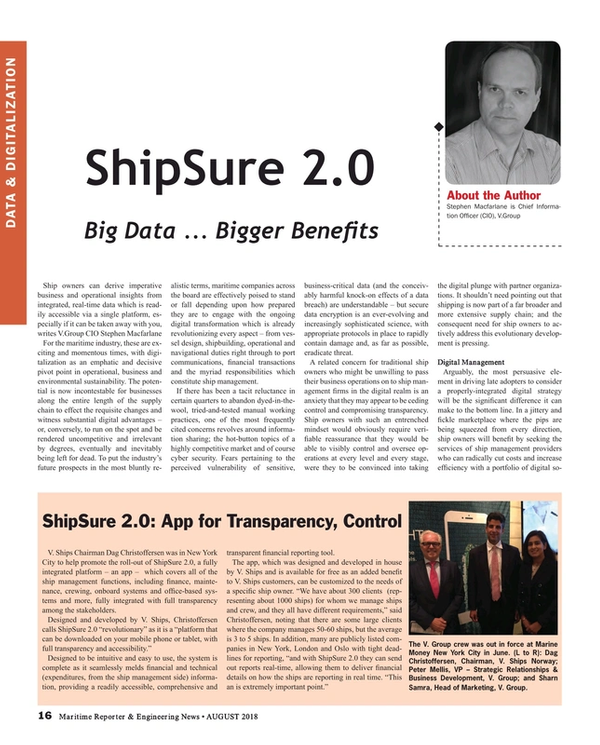