Tokyo-based Nippon Kaiji Kyokai, or ClassNK as it is more commonly known, is one of the world's leading classification societies with 9,104 ships representing 250 million gt under register, as of June 2018. We spoke with Koichi Fujiwara, Chairman, ClassNK, earlier this year in Tokyo for his overview of the market today, and the path forward on technological trends.

While Koichi Fujiwara, like many of his colleagues, sees challenging times in the maritime market, he does note that conditions are improving; albeit slowly.
“At the beginning of this year I was asked about the market, and my answer was that 2018 would be another 2017,” said Fujiwara. “We experienced the worst market situation in 2016; in 2017 (it was a bit better as) the dry markets recovered. My view is that perhaps the turning point will come in 2019.” Specifically Fujiwara sees looming IMO regulations which dramatically reduce the amount of sulfur emissions from ships coming into force in 2020 as a driver. “Ship owners and shipping companies will have to make a decision on how to deal with the new emission regulations: scrubbers, alternative fuel or even the scrapping of older vessels. So this year can be summed up as ‘not very bad, but not very good’.”

Investing in the Future
The lifeblood of class is new construction, and with the global lull in newbuilding all classification societies struggle with right-sizing the organization to contend with current market conditions. This market downturn is unique from swoon’s past, as the pace of technological change in the maritime sector mandates a consistent investment in new technological expertise by class to keep pace. To that end, Fujiwara said that “ClassNK made a medium-term management plan including technology development in 2017 to run through 2021. One of the most important issues today is a thorough review of existing class rules to make sure that they are in step with the rapid pace of technological evolution on the ships.”
He continued, “The next issue is looking at the evolution of technology as it applies to ship survey. This is our business. The shipping world is changing rapidly with digitalization, and the question is ‘how class will evolve’ in the future.”
As digitalization continues to beat a path toward smaller crews and eventually fully autonomous operations, “the question then turns to how all of this will affect class and specifically ship survey,” said Fujiwara. Survey methods have to change in the future. With fewer seafarers (onboard ships) and more shore-control, condition monitoring of the ship will be pushed to sensors and automation, and the physical visit of a surveyor to a specific ship may not be as necessary.”

Enter Artificial Intelligence
While ClassNK continues to study the various technical points, such as sensing technology, communication technology and analysis technology, Fujiwara is clear that the future will be pave with Artificial Intelligence (AI).  “Many jobs that are currently carried out by humans will be replaced with AI. In the classification business, AI is very useful to conduct some class-related jobs, but as AI gets better and better, we must discover new ways that AI can be useful in the classification business.”
While the path is clear, the time-table to arrive is a bit fuzzy.
“It is very easy to dream!,” said Fujiwara. “There are many ideas on how to use AI in classification and in shipping. It is important to keep in perspective though that only 30 years we could not imagine the iPhone of today; 30 years ago this was a dream.” For the shipping industry, the trick will be getting AI systems commonly accepted and in use across the industry, integrated and communicative with other ships.
While many insiders and outsiders alike term the shipping industry ‘conservative regarding technology uptake, Fujiwara said, given its size, it should come as little surprise that it is a slower process in shipping. “The shipping market is not so big, and the speed of technology really depends on the size of the market,” he said. “The Facebooks and the Googles of the world have grown up very quickly because their market is huge. But shipping is not so big, and the lifetime of a ship is very long. So in the shipping world it will be gradual change as fleets are renewed.”

New Rules = New Ships?
The maritime industry is in a transcendent period, with an avalanche of new emissions rules that promise to significantly alter the maritime landscape, and potentially trigger a spate of new construction as older ships prove too costly to convert. When asked his thoughts on the new rules triggering a new ship order spree, Fujiwara was succinct: “I hope so! As the CEO of ClassNK, I think I should be a little pessimistic about that. At the moment ClassNK is very stable, and we have the ability to invest in new technology. I see the market turning up in 2020-21, but I will take the pessimistic view in case not.
He agrees that new rules surrounding Greenhouse Gas Emissions are the biggest change at the moment, particularly the recent decision taken by IMO MEPC to cut emissions 50% by 2050. “Using fossil fuels will only go so far in saving GHG, new concepts are necessary,” said Fujiwara.
Through R&D ClassNK plans to maintain its leadership mantle in this regard, taking a deep dive into the digitalization and data and it is central to meeting ever more strict performance and environmental mandates.
“We are trying to make some rules regarding big data exchange, and we are certainly not alone in this regard, it’s the same type of issue faced by the other tech giants … who owns the data, and how can this data be used. It’s a big issue,” said Fujiwara. “So we’ve built up some market rules and set up a common platform with rules to govern the collection, storage and use of data. We are starting this year on a trial basis, and many shipowners and shipbuilders are joining. If it’s successful, we will spread it to the rest of the world.” 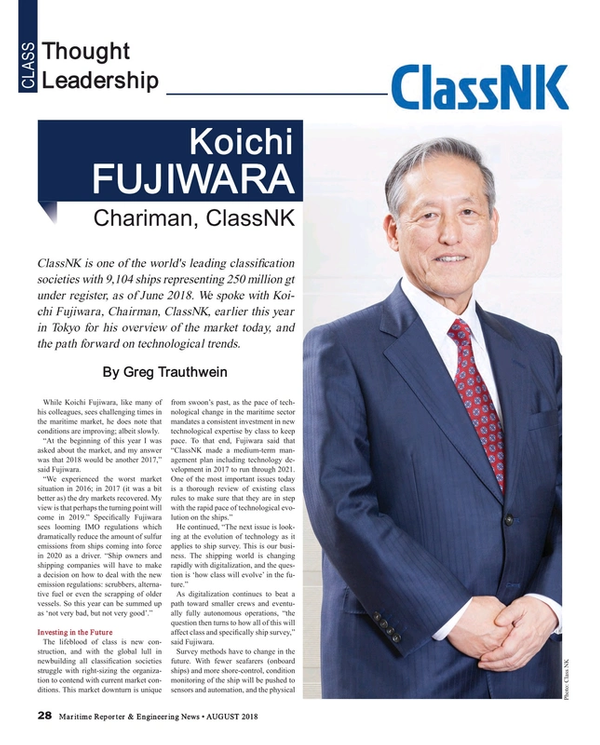