A Closer Look at Maritime Finance and Risk

Maritime businesses face a broader range of risks than most. A look at some recent business transactions is proof enough.

Risk is a critical element of every maritime-related business transaction from a financial risk management perspective, a market perspective, or often both. As with most business segments, maritime dealmakers and financiers employ elaborate risk management tools to evaluate the efficacy of acquisitions, loans and investments. But perhaps even more important are the markets for goods and services that have developed around the risky nature of most marine business sub-segments.  These markets have attracted a great deal of investment in recent years as maritime companies strive to manage their risks in order to enhance financial performance as well as improve their public relations and safety records.
Maritime businesses face a broader range of risks than most, from navigation and safety in normal at-sea operations to the threat of piracy and catastrophic collisions or environmental mishaps. Just a few months into 2014, mariners have already faced nearly 100 pirate attacks with dozens of crewmembers taken hostage. Ship collisions and groundings remain a regular occurrence with incidents from the US Gulf Coast to Virginia to South Korea already this year, bringing human casualties as well as environmental hazards. And of course, the mystery of the vanished Malaysian Airline flight 370 has ignited a massive high-profile search at sea, bringing focus to the challenges of tracking and locating any object in the expansive maritime domain.

Risk Creates Markets
In recent years such risks have spurred deal activity in businesses that are dedicated to maritime safety and environmental matters. In December 2013, France-based Orolia (NYSE Alternext Paris: ALORO) announced its agreement to acquire Techno-Sciences, Inc. (TSi) of Beltsville, MD. Orolia has grown via a number of successful acquisitions and is firmly established as a leader in the emergency response market and in the Maritime Domain Awareness (MDA) sector. In January 2014, Orolia announced the creation of McMurdo Group to unite its Positioning, Tracking and Monitoring Division and its Boatracs, Kannad, McMurdo, SARBE and TSi brands. With the acquisition of TSi, Orolia has added capabilities including satellite ground stations and mission control software, as well as coastal surveillance and offshore asset protection solutions. Orolia has experienced solid growth and is actively pursuing additional acquisitions in their niche markets.
Safety and environmental compliance are focus areas for Drew Marine, which was acquired by an affiliate fund of private equity group The Jordan Company from another marine-savvy PEG, J.F. Lehman & Company last November. Concurrently with the Drew acquisition, The Jordan Company acquired Lehman’s portfolio company ACR Electronics. ACR is a leader in maritime and aviation safety and survival solutions such as rescue beacons and lighting products.  As noted in a past article, J.F. Lehman acquired OPA 1990-compliance leader National Response Corp (NRC) from Seacor in 2012.  In March of 2014, NRC completed the add-on acquisition of UK-based Sureclean Limited, a provider of specialty environmental and industrial solutions.
Examining another area of risk, recent months have brought a handful of deals in marine security and defense. In early 2014, The McLean Group represented 3 Phoenix in their sale to Ultra Electronics of the UK for $87 million. 3 Phoenix provides real-time sensor and processing solutions, primarily for Navy radar and sonar systems. The company will augment Ultra’s existing Tactical & Sonar Systems division.  In April TE Connectivity (NYSE: TEL), formerly Tyco Electronics, signed an agreement to acquire SEACON Group, a provider of underwater connector technology for military and other subsea customers for $490 million in cash.  Finally, Swedish military contractor SAAB has just announced that it is in talks to acquire ThyssenKrupp Marine Systems, a builder of submarines and warships in Europe.
An interesting deal took place in Canada during the first quarter, when a group of independent board members of Rutter Inc. consummated a tender offer for the shares of the publicly-traded company. A provider of defense, navigation and maritime surveillance technology centered mainly on radar applications, Rutter had been struggling for years and watched its share price fall by 95% since 2006.  The investor group commenced their tender offer to buy all the outstanding shares of the company in January, and by March had received deposits of more than 38% of the shares, giving the group an 80% controlling interest overall. The new owners will now de-list Rutter from the Toronto exchange and perform an acquisition of remaining shares at the same price as their tender offer.

Financial Risk and M&A Deals
Financial transactions, particularly large ones, involve a complex and in-depth evaluation of risks by players on both sides of the deal. In Mergers and Acquisitions, sellers generally seek to diversify their portfolios by reducing their exposure to the risk of holding ownership in the subject company.  Meanwhile, the buyer and its advisors expend often enormous time and resources in the analysis of the risks they are taking on during the “due diligence” period.
Over time, we can assess risk tolerance levels in the market by examining compiled data from a collection of transactions where deal metrics have been reported. Figure 1 displays all worldwide marine and port-related deals drawn from a number of proprietary data sources. Explaining the chart in brief, the blue section of the columns displays the deal count for the first quarter of each year, whereas the red section of the columns shows the number of deals for the remainder of that year. The green line tracks the ratio of average Enterprise Value (EV) to Earnings Before Interest, Taxes, Depreciation and Amortization (EBITDA). EV is just the total value of the company, including all of the debt and equity (stock value) that make up the company’s balance sheet. EBITDA is really the cash flows that a buyer will have to finance the transaction without regard to the current financial arrangements of the target company.
Figure 1 shows that in the recovery years from 2009 to 2011, deal counts as well as value ratios increased each year. The high EV/EBITDA number in 2011 was affected by some Asian port deals that had very high reported values, but the trend is an interesting subject for analysis. In effect, buyers showed a growing willingness to accept increasingly higher risk over this three-year period, paying a higher price for the same or slightly higher cash flows. Since that time, enthusiasm on the buy side has waned a bit in the aggregate, though it should be noted that a thorough analysis would involve study of the type of deals and even individual transactions to get a clear picture of the risk landscape.
Risk is a central issue in almost every facet of maritime and offshore industries. Markets are both affected by and actually created by the many risks inherent in maritime activities. This explains why marine finance involves a complex set of activities that are focused on identifying and quantifying risk, and then allocating resources based on the expected risks in a given transaction. 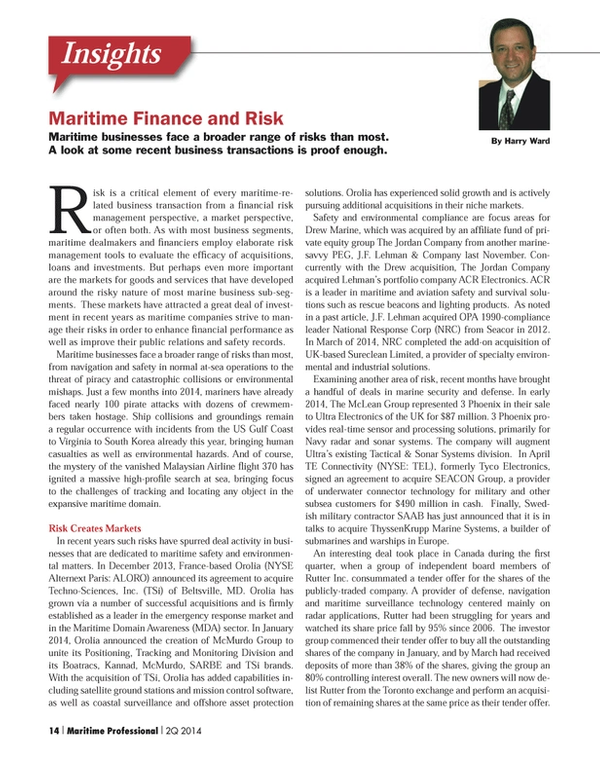 Read A Closer Look at Maritime Finance and Risk in Pdf, Flash or Html5 edition of Q2 2014 Maritime Logistics Professional