Drum Cussac readies local countries to address the scourge of piracy, which up until now has been a largely international endeavor, with a focused ‘capacity building effort.’

The late Nelson Mandela once said: “I dream of an Africa which is in peace with itself.” At the EU-Africa summit in Brussels last month, European leaders urged their African counterparts to facilitate that dream by shouldering more of the security burden in their countries, both onshore and offshore. The summit coincided with reports of renewed piracy activity in the Gulf of Aden; ongoing attacks on shipping in the Gulf of Guinea, and explosions and mass arrests in Kenya, all serving to underline the scale of that challenge.

High Stakes: International Interests and Effort
With African exports to European countries at an all time high, and the UK, France and the United States jostling for the title of the biggest investor in Africa, the stakes have never been higher, nor the waterways so important. NATO ships, joined by other international vessels, are into their seventh year of protecting international shipping in the Gulf of Aden and off the Horn of Africa. While the mandate was extended for two more years in 2012, a second extension is not guaranteed.
Countries like Kenya, Tanzania, Nigeria and Madagascar, which are battling the worst of the piracy problem, are mobilizing their military forces to protect national and international interests. Drum Cussac, the UK-based global risk management group, has advisers and mentors working alongside all these forces, and is seeing the capacity building effort at first hand, as well as contributing to it.
“The African nations do know how important it is that they protect national and international assets both at sea and on land,” says Drum Cussac’s Director of Offshore, and Government and Industry Affairs, Andrew Nicholson. “As the leaders were talking in Brussels about improving security measures, Drum Cussac’s consultants were deployed every day working side-by-side with African soldiers and sailors, doing just that.”
Kenyan soldiers, with Drum Cussac consultants acting as security advisors, worked to protect the Deepsea Metro 1 oil rig off Mombasa, for British Gas Group (BGG). Now that it has been moved south, their Tanzanian counterparts have taken over the task. Nigerian soldiers, aided by security advisors from Drum Cussac Nigeria, are protecting the Polarcus Nadia off the coast of Lagos, as it completes a seismic survey of the block known as OPL 310.
And the Madagascan Navy provided armed security for four recently completed seismic, gravity and magnetic surveys off the north, south and west coasts of Madagascar (two by the Norwegian geophysical company, TGS-NOPEC (TGS) operating in a joint venture with BGP, a subsidiary of China National Petroleum Corporation (CNPC), and two by TGS alone).

Standing Up Locally
The commander of the Antsiranana Naval Base, Capitaine de Vaisseau, Vaohavy Andriambelonarivo Andasy, said his forces were perfectly able to keep international vessels, rigs and their crews safe despite the ever-present security threat off Madagascar.
“The Malagasy Navy is very professional. All our officers have had extensive training abroad and we can do the job well, as long as we are given the right resources. At the moment we only have six vessels to protect nearly 5,000 kilometers of coastline, so putting our officers and sailors on commercial vessels, with Drum Cussac international mentors by their sides, is an ideal solution.”
Drum Cussac’s Project Manager Ian Ferguson said his security advisors had trained with the Malagasy Navy every day for three months on the M/V Geo Arctic while it surveyed the waters off the southern tip of Madagascar. “We were there to help the Malagasy sailors build on their sea survival and first aid techniques, and to reinforce international standard operating procedures in the event of an attack by pirates. It didn’t happen, thankfully, but the sailors also helped to keep the Malagasy fishing boats away from the seismic streamers when the sonars were in operation, so they were hugely helpful on board.”
“Our government is right; it should be us protecting these international ships,” said one of the Malagasy First Lieutenants who was stationed on the M/V Geo Arctic with Ian Ferguson. “We know the area; we know the risks; we speak the language, and it is our country which is going to benefit from the results of these surveys.”
In Lagos, Fred Ijewere, the Managing Director of Drum Cussac Nigeria, said: “The Nigerian Joint Military Task Force knows the risks in these waters better than any other organization, and the Nigerian government is very keen to maintain the lead in protecting shipping, rigs and the exploration surveys.”

Operation Restore Hope
The Joint Military Task Force (JMTF) in Nigeria is part of Operation Restore Hope, set up specifically to protect oil installations and fuel-carrying vessels, although the presence of the soldiers has often served to inflame the militant groups, angry at the international exploitation of the Niger Delta region. Attacks have increased at a double-digit rate each year since 2000.
The Gulf of Aden and the Horn of Africa have been synonymous with the contemporary definition of the word pirate for many years now. However, even though 49 seafarers were taken hostage and 36 vessels seized last year off the west coast of Africa, the word ‘pirate’ is sparsely used in reports of attacks in the Gulf of Guinea. This is largely due to semantics, and the United Nations definition of piracy, as opposed to the dictionary description of the word being “an intent to commit theft or any crime by force on a vessel”. The United Nations definition, and therefore its mandate for action, is “a criminal act committed on the high seas, outside the jurisdiction of a single state.”
In Nigeria, and off other countries along the west coast of Africa, most of the attacks on shipping, which regularly include kidnapping of international crew members, and seizing of vessels, take place in territorial, not international, waters. The onus is therefore on the West African nations to tackle the scourge with national resources. But the number of attacks in the Gulf of Guinea continues to rise month on month.
With 13 percent of all oil imported to the EU, and six percent of all Europe’s gas supplies, originating from the countries along the Gulf of Guinea, the international community therefore cannot just watch from the sidelines. April saw navy ships from the United States, France, Germany, Brazil, the Netherlands, Belgium, Spain, Turkey and Portugal all converge on the Gulf of Guinea for the fourth annual counter-piracy exercise involving 31 vessels and 20 countries.
The African countries most affected by piracy, including Angola, Benin, Cameroon, Ivory Coast, Equatorial Guinea, Gabon, Ghana, Nigeria, Congo, Sao Tome and Principe, and Togo sent their ships to participate in scenarios aimed at enhancing counter-piracy tactical expertise. That’s because all West African countries have felt the economic impact of the pirate activity. For instance in Benin, trade through the main port of Cotonou has dropped by 70 percent in just the past year alone.

Formidable Opponents Involve Considerable Risk
Modern pirates now wear night-vision goggles, carry AK-47s, heavy machine guns, and rocket launchers; navigate with GPS devices, and use sophisticated speedboats mounted with heavy mortars to target ships. Some Somali pirates have been seen in possession of Russian-made 82 mm mortars that can target vessels as much as five kilometers away.
Violence is the modus operandi especially in West Africa. One Scottish sea captain seized along with his ship in May last year said the pirates threatened to burn him alive. Separately, Angola saw its first reported hijacking in the first quarter of 2014, further demonstrating the increased range and capability of Nigerian piracy, if left unchecked. According to local reports, the incident involved armed pirates boarding and hijacking a loaded tanker from Luanda anchorage, Angola. The pirates took a large quantity of the tanker’s gas oil cargo in three separate ship-to-ship transfer operations. The vessel was under the control of suspected Nigerian pirates for over a week before the owner regained contact, off Nigeria, approximately 1,200 NM from the initial boarding. One crewmember was injured during the incident.
Insurance premiums are still spiraling upwards, inflating the prices of African exports –oil, gas and commodities. Drum Cussac Nigeria says that it is now seeing the same level of demand for its risk advisory services in West African countries as the Drum Cussac Group saw off East Africa. Amidst reports from the International Maritime Bureau (IMB) of the lowest first quarter piracy figures since 2007, this is not the time to let up. IMB also warns that there is “no room for complacency” and “that the threat is still present.”
The root causes, if not the organization, of piracy are the same in East and West Africa: that is economic deprivation, a lack of rule of law, environmental pollution and a widespread failure to tackle social issues. IMB continues to call for the continued, essential role of the international navies in containing the threat of Somali piracy, despite the drop in attacks. Nevertheless, local efforts – aided by firms such as Drum Cussac – remain just as important to the final goal. That said; the EU and United States may be pushing African leaders to tackle these root causes, but on a continent where three people out of four still live in abject poverty, quick fixes remain as distant a dream as that of Nelson Mandela. 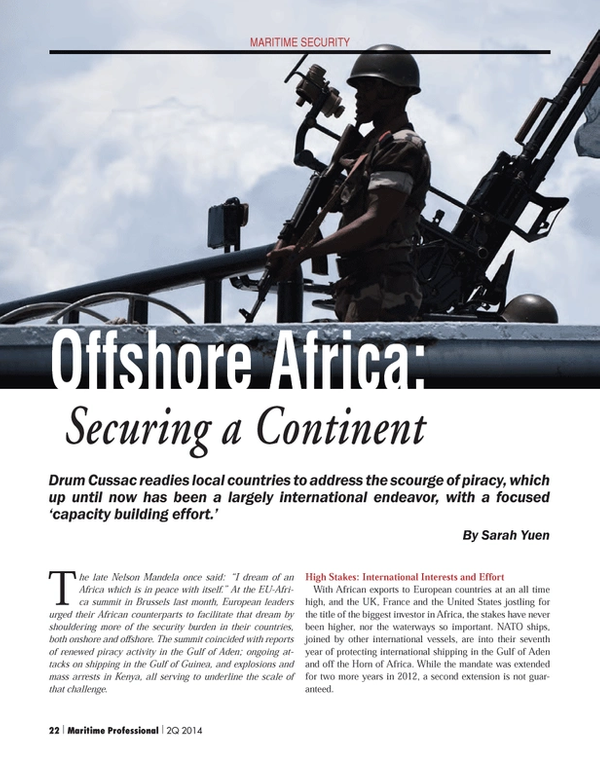