MarPro contributor Captain Jeff Cowan weighs in on the U.S. Coast Guard’s ambitious plans to bring America’s waterways into the 21st century. Some parts of that template do not sit well with him, and others.

One of the issues that piqued this writer’s interest during a recent discussion with a U.S. federal official was the pending elimination of certain Aids to Navigation (AtoN) off the coast of California. That’s right: elimination of certain aids to navigation. The action rests upon the assumption that ALL vessels are equipped with Electronic Chart Display and Identification System (ECDIS) which is mandated to be installed in all ships between 2012 to 2018 depending upon type and size.
“A mark [virtual buoy] will be placed upon ECDIS chart showing where the eliminated buoy was and could be used as a waypoint,” said official sources. This official assumed that Global Position System (GPS) with ECDIS would be enough justification to replace visual aids to navigation. But what about domestic tow boats and commercial fishing boats and recreational boats? Aids to navigation support more than just internationally trading commercial ships. Prudent navigation of ships and boats still rely upon visual references to perform safe navigation within close proximity to land. More importantly, IMO regulations require that “a method be in place that provides “a means to provide for safe navigation for the remaining part of the voyage in case of ECDIS failure” (IMO RESOLUTION A.817 (19) / APPENDIX 6). Or, in other words, if the ECDIS fails, then visual aids to navigation will still need to be used as a backup. So why are they being eliminated?

First argument: We have GPS
Stakeholders have long warned the federal government about the situation, and advised against the action. During a recent the Coast Guard and Marine Transportation Congressional subcommittee hearing, Mr. Dana A. Goward, President and Executive Director, Resilient Navigation and Timing Foundation cited several examples of downgraded or masked GPS signals. He also acknowledged Dr. Brad Parkinson, widely regarded as the ‘father’ of GPS, who said “Reliance on satellite navigation and timing systems has become a single point of failure for much of America and is our largest, unaddressed critical infrastructure problem.”
Parkinson continued, “This is because GPS is a distant, faint signal that is very easy to disrupt. In fact, it is being actively disrupted every day. Fortunately, most of these disruptions are very local and of short duration. Occasionally, however, they can cause economic loss and can threaten safety of life.”
Approximately two months before the subcommittee hearing, a team masked a GPS signal and transmitted a false signal to a test vessel (called spoofing). After cloaking the device and transmitting the false signal, the subject vessel changed course abruptly upon receipt of the false signal. Granted, a system linked to the ECDIS handled steering and not under a live helmsman. But what can be done to ensure that a navigation change will not be made based upon false GPS information in the future? Without aids to navigation, what can mariners use to verify the accuracy and trueness of a GPS signal?

Second argument: We could use eLORAN
Also during his testimony, Mr. Goward further stated, “The federal government has long recognized GPS vulnerabilities and the risk they pose. In response to presidential direction, and after much deliberation, the government announced in 2008 that it would establish a nationwide, resilient terrestrial system to augment GPS, called eLoran. This new, eLoran system would build upon and modernize the Cold War vintage Loran-C system, be much less expensive to operate, and much more precise. Implementation of eLORAN in the US would cost $40 million and annual maintenance costs of $16 million.”
Goward adds, “Numerous countries (Russia, China, most of Europe, India and South Korea) recognize this GPS vulnerability and have installed or are installing eLORAN systems. What is the US doing? Dismantling what infrastructure remains of the old LORAN-C system under the auspices of our Department of Homeland Security.” The use of the remaining Loran-C installations for eLoran is feasible, but unfortunately, that is not the direction the Federal government is going.

When the buoys are gone: What happens to situational awareness?
In some circles, ‘situational awareness’ is defined as “the perception of environmental elements with respect to time and/or space, the comprehension of their meaning, and the projection of their status after some variable has changed, such as time, or some other variable, such as a predetermined event. It is also a field of study concerned with perception of the environment critical to decision-makers in complex, dynamic areas from aviation, air traffic control, ship navigation, power plant operations, military command and control, and emergency services such as fire fighting and policing; to more ordinary but nevertheless complex tasks such as driving an automobile or bicycle.”
Arguably, the removal of aids to navigation (ATON) affects the situational awareness for all mariners commercial and recreational. Depending upon the situation, aren’t aids to navigation important for safety? The majority of boats without ECDIS will be commercial fishing boats, domestic tow boats and recreational boats. It is understood they may have some form of Electronic Chart but probably not a SOLAS approved system. Most of these individuals will still be relying upon visual aids to safely navigate. How will these boats navigate without aids to navigation?
While transiting the coast of California in restricted visibility, experienced mariners find themselves looking out the wheelhouse window. Prudent mariners know that not all targets show on radar or in this case, enhanced ECDIS. Granted, Automatic Identification System information will show on the ECDIS, but during a 35 year career spent at sea, this writer has seen numerous times when the AIS data was incorrect. In these instances, sighting a navigation buoy enhances the “situational awareness” of the mariner, prevents allisions, collisions and groundings. Sometimes a quick visual reference outside in conjunction with a screen display (radar and/or ECDIS) – in this mariner’s experience – has proven invaluable.
“Mariners rely on multiple layers of information to establish their positions, and the foundational layer they depend upon most is the physical objects they see out the window,” said Captain Lynn Korwatch during the Congressional subcommittee hearing. “In fact, many of the nautical charts specifically warn mariners not to rely solely on any one means of navigation.” If experts, GPS creators, and experienced mariners have safety concerns, why is the Coast Guard proceeding with removing the aids to navigation?
“We have GPS receivers in our cars telling us where to turn but street signs have not been eliminated,” continued Korwatch, trying to put the situation into more tangible terms. “Why are the nautical street signs being eliminated?”

The truth: Show us the money
Federal officials sometimes justify eliminating aids to navigation and using virtual aids under the IMO requirement for ships to utilize ECDIS by 2018. Yet, there is a more pragmatic reason which revolves around cost savings. A review of the US Coast Guard budget shows that funds for maintenance of aids to navigation were redirected to security, USCG functions; not related to civilians. The Federal official excused the cuts and reported confidence in virtual navigational aids, making reference to the lack of funds to support them.
The funding existed. Where did it go? Analysis reveals that the missing funds are redirected to Maritime Safety and Defense Readiness, among others. Consider this: The Air Transport industry contributes $1.2 Trillion to our economy and is responsible for 5.2% of GDP and 10 million jobs, according to the FAA. The Maritime Transport industry contributes $8.6 Trillion to our economy and is responsible for 32% of GDP and 13 million jobs, according to AAPA.
Is a backup system to GPS and visual aids to navigation no longer important? Does defense/security readiness supersede commerce or does it support it? Commerce produces jobs that pay for defense. Navigational aids are one small part of the puzzle that could be enhanced with proper funding. Not everyone will have the latest ECDIS (video game) that money can buy and even if they do, heaven forbid that a power failure occurs. What price should we put upon the safety and security of mariners lives and the sanctity and beauty of our shores? With the removal of buoys, it is only a matter of time before a casualty occurs from the loss of funding for ATON’s. In other words, what is saved in prevention shall eventually be spent in response. 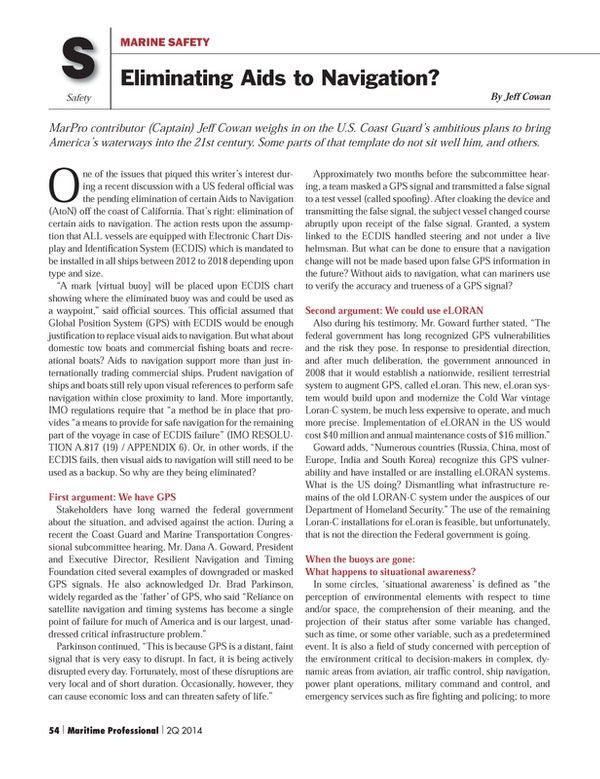