Piling It On: Oil Spill Liability

While the U.S. Congress can create and pass legislation, in many circumstances there can be state laws that either augment, overlap or potentially create conflict with the federal laws. This can be especially true in the maritime world, where federal admiralty jurisdiction results in legislation that often specifically allows concurrent state law requirements. Three good examples of this can be found in the areas of abandoned and derelict vessels, vessel discharges, and liability for oil spills.

Abandoned and Derelict Vessels
Abandoned and derelict vessels are a continuing issue for federal, state and local officials, impacting many U.S. harbors, bays, and shorelines. Sunken, stranded, and decrepit vessels can be an eyesore, a hazard to navigation, or present a significant environmental threat. Wrecks can physically destroy sensitive marine habitats, sink or move during coastal storms, disperse oil and toxic chemicals still on board, become a source of marine debris, and spread derelict nets and fishing gear that entangle and endanger marine life.
For many years, the National Oceanic and Atmospheric Administration (NOAA) has taken the lead on derelict vessels through its Marine Debris Program, and focused its activities on coral habitats where they performed surveys in Guam, the Commonwealth of the Northern Mariana Islands, American Samoa, Puerto Rico, and the U.S. Virgin Islands.
Since 2005, the NOAA Marine Debris Program has expanded its efforts and has been mandated to take actions through a number of statutes, including The Marine Debris Research, Prevention and Reduction Act; The Coral Reef Conservation Act of 2000; The Marine Protection, Research, and Sanctuaries Act of 1972 (Ocean Dumping Act); The Coastal Zone Management Act of 1972; and the Marine Plastic Pollution Research Control Act.
Through its programs, NOAA has identified over 1,100 abandoned or derelict vessels. These vessels are prioritized based on environmental and other threat levels. In addition to the federal government’s program, several States including Florida, Maine, Maryland, New Jersey, Texas, and Washington State have established derelict vessel response regimes.
Washington State has been the most aggressive state in attacking the derelict vessel issue. In 2001, Washington State’s Legislature authorized a grant program for local governments to clean up and dispose of hazardous substances on abandoned and derelict vessels. However, funding was inadequate and only generated a fraction of the funds that would be required to address its current backlog of over 200 vessels identified as derelict and in need of removal.
If the Washington legislature needed an incentive for additional funding legislation, they got it as a result of the DAVY CROCKETT incident. In January, 2013 the owner of the DAVY CROCKETT, a World War II Liberty Ship, was issued a fine by the Washington State Department of Ecology (“DOE”) in the amount of $405,000 for environmental violations and negligence arising from the owner’s attempt to perform an in-water scrapping of the vessel along the banks of the Columbia River. Washington State DOE also issued a bill to the vessel owner for State response costs in the amount of $680,000. The unsuccessful scrapping of the DAVY CROCKETT began in October 2010, and resulted in a ten month multi-agency response led by the U.S. Coast Guard at a cost of over $22,000,000 to the National Pollution Fund Center’s Oil Spill Liability Trust Fund. Authorities determined that the 430 foot vessel continuously discharged oil and oily debris for a minimum of 40 days with no notice of the discharges being reported by the vessel owner. The owner of the DAVY CROCKETT pled guilty to two criminal violations of the Clean Water Act.
The DAVY CROCKETT response was the second largest draw down in history from the National Pollution Fund Center Oil Spill Liability Trust Fund. The largest was for the sunken wreck of LUCKENBACH off the Golden Gate in San Francisco Bay. Not surprisingly, the West Coast is the origin of significant legislative and regulatory activity to address derelict vessels and orphan wrecks. The immense cost to taxpayers to respond to a private vessel problem triggered the formation of a work group in the spring of 2012 amongst the Federal Government, the States of Oregon & Washington and other regional Pacific Northwest public and private stakeholders. The work group submitted recommendations to the Washington State Department of Ecology and some of those recommendations have found their way into legislation recently passed by Washington State.
The new Washington State derelict vessel legislation provides for, among other things, a tax of $1 per foot on commercial vessels to raise revenue for the state’s derelict Vessel Removal Account. Proof of financial responsibility for potential pollution removal and salvage costs must be demonstrated by both transferors and transferees of vessels over 40 years old and over 65 feet long. The seller of a qualifying vessel has secondary liability for response costs for a derelict vessel should the subsequent purchaser not maintain mandatory $300,000 marine insurance cover for a period of twelve months. This secondary liability regime may raise a constitutional question: how can a seller continue to have liability for a vessel they no longer own or control?
The legislation also requires marina owners and operators to maintain wreck removal and pollution coverage or else may be subject to liability under the statute for derelict vessels within their marina. It is still not clear if the full extent of the coverage required is actually readily available in the current insurance market.
Federal and State government Regulators continue to seek private resources to address pollution and wreck removal costs for derelict vessel responses. When an owner of a derelict or abandoned vessel is insolvent or cannot be identified, regulators frequently seek to tap past insurance coverage for mitigation costs. These efforts are not always successful given the government’s burden of proving that a covered incident occurred, or peril arose, during an applicable policy period.

Vessel Discharge Regulation
For over 30 years, vessels were excluded from U.S. Environmental Protection Agency (EPA) permit regulations that required permits for any “discharge of a pollutant” from a point source. Lawsuits by environmental groups challenged this exclusion, and in 2008 the exemption was eliminated for most seagoing vessels operating in U.S. waters. These vessels are now subject to the Vessel General Permit (VGP) which is part of the National Pollution Discharge Elimination System (NPDES). The NPDES incorporates dozens of discharge types into the regime, including deck washdown and runoff, bilge water, antifouling hull coating leachate, aqueous film-forming foam, boiler blowdown, cathodic protection, chain locker effluent, fire main systems and various other gray water and effluents.
Although the system is national in scope, the NPDES allows individual states and Native American Tribes to establish additional water quality standards. These state specific requirements are more restrictive than the broader national regulation scheme. For example, Section 2.2.15 of the 2013 VGP establishes guidelines for the storage and discharge of gray water. However, California certified the VGP with additional permit conditions, including the outright prohibition on gray water discharges from large passenger vessels and cruise ships, as well as any oceangoing vessel with sufficient holding capacity that weighs 300 gross tons or more. This condition cannot be made less stringent without violating the requirements of state law.
To address this patchwork regulation of vessel discharges, legislation has been introduced in the U.S. Senate that will establish a single federal framework for the regulation of ballast water and other vessel discharges.

Unlimited State Liability for Oil Spills
Limitation of liability for shipowners has been a basic tenet of maritime law since the middle ages, limiting liability to the value of a vessel and its cargo, but it wasn’t until 1851 that Congress codified the dictum in the Shipowner’s Limitation of Liability Act (SLLA). Originally intended as a way to encourage productivity in shipbuilding, the law’s relevance eroded over time as the shipping industry modernized and as Congress introduced additional incentives. Nonetheless, the SLLA remained the prevailing authority for limitation of liability until passage of the Oil Pollution Act of 1990 (OPA 90) in the wake of the Exxon Valdez. Not only did OPA 90 replace federal limitation provisions for liability in oil spills, but it also eliminated the protections against liability for vessels and facilities under state law which had conferred some degree of uniformity among the various states.
OPA 90 did not preempt state oil spill liability law, so states were free to impose  additional civil and criminal liability (including unlimited liability), funding mechanisms, requirements for removal actions, and fines and penalties for responsible parties as allowed under OPA 90 (OPA 90 §1018(c)). This development effectively opened the floodgate for states to establish their own peculiar liability regimes with respect to oil pollution damages and remediation. To date, legislators in some twenty states have instituted unlimited liability regimes for either damages, or cleanup costs, or both, notably including states along the Eastern Seaboard, the Gulf of Mexico, and the West Coast.
The most recent state to avail itself of its right to impose unlimited liability on vessel and facility owners is Delaware. Prior to passage of DE HB 32 in June of 2013, Delaware law limited liability for damages to $300 per gross ton or $250,000, whichever is greater, up to a maximum of $30,000,000 for ships; and $50,000,000 in the case of a facilities. DE HB 32 removed this limitation, and extended the object of damages to include cleanup costs; injuries to, loss of use of, and loss of profits from of real or personal property; injuries to, loss of use of, and loss of profits from natural resources; and loss of tax revenue  due to injury to real or personal property. By contrast, OPA 90 limits liability for non-tank vessels to the greater of $1,000 per gross ton or $854,400; and $75,000,000 in the case of facilities. As Hawaii considers HI SB 2018, another unlimited liability statute, it seems that our patchwork quilt of state-level liability promises only to grow.

Summary
Despite the primacy of federal admiralty law, Congress has still left plenty of room under various statutory schemes to allow states to create their own requirements. This means that almost all vessel operators must be cognizant of the various layers of state and federal regulation and potential liability faced when operating in U.S. waters. Smooth sailing! 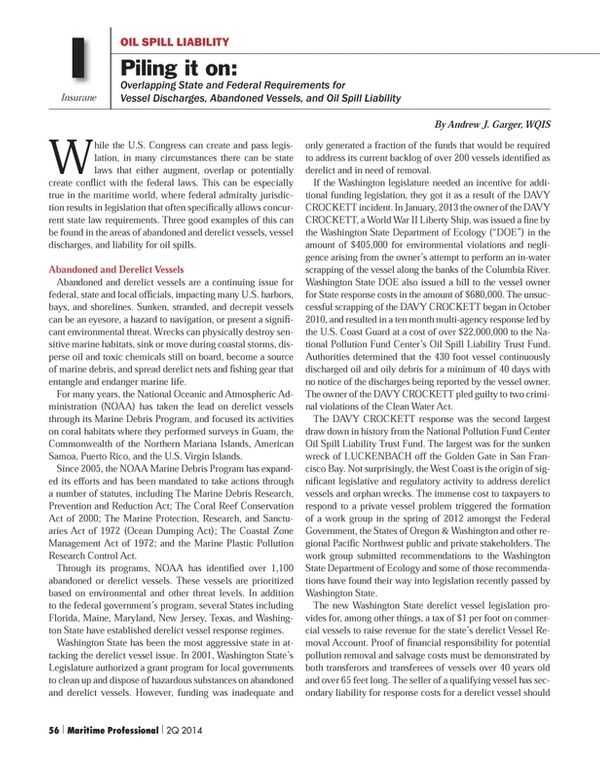