On June 4 2012, Deputy Maritime Administrator Paul “Chip” Jaenichen was named Acting Maritime Administrator. With the U.S. Maritime Administration since July 2012 when he was appointed Deputy Maritime Administrator by President Obama, Jaenichen would no doubt like to be confirmed as the Administrator; sooner, rather than later. Nevertheless, he’s not letting any grass grow under his feet in the meantime. Beyond this, the affable Jaenichen has rejuvenated an arguably ineffective Marad organization that had in recent years drifted aimlessly without strong leadership. With enthusiasm and a genuine passion for the domestic maritime industry, he has once again put Marad squarely in the conversation even as the collective U.S. waterfront ponders how to sustain its best up cycle in more than three decades.
A career naval officer, Captain Jaenichen retired after serving 30 years as nuclear Submarine Officer. His final assignment as Deputy Chief of Legislative Affairs for the Department of the Navy no doubt comes in handy as he fights for dollars and looks to change statutes and rules that he says put the domestic waterfront at a competitive disadvantage, here at home against strong rail and truck lobbies, and abroad, where foreign flag operators sometimes enjoy easier taxation schemes and rules.
With a Bachelor of Science in Ocean Engineering from the United States Naval Academy and a Masters in Engineering Management from Old Dominion University, he also boasts numerous military awards, including the Defense Superior Service Medal, Legion of Merit, Meritorious Service Medal, Navy-Marine Corps Commendations and the Navy-Marine Corps Achievement Medal. His leadership skills, therefore, are not in question. On the other hand, commercial maritime stakeholders sometimes ask how a naval officer can make the transition to the other side of the maritime equation and, more importantly, how much he could know about merchant shipping. As it turns out: plenty.

Leadership 101
With his naval retirement in the works, Jaenichen got a call from the White House who said that the Department of Transportation was looking for a retired military person that had expertise and leadership in management. He agreed to look at the job and one thing led to another. He told MarPro in April, “One of the things that the military does pretty well is that we know how to put together strategies. Once you’ve put together that strategy, we also know how to implement them. I built budgets around strategies to be able to make that happen and so, the expertise that I bring is to be able to develop a coherent strategy, and execute on it. And, it’s fortuitous at this time that we need to put together a maritime strategy for this country.” As he does, Jaenichen brings 30 years of leadership – from command of a ship with 150 personnel all the way to a billet responsible for 1,000 people and a $2 billion budget.
The Acting Administrator’s experience in legislative affairs is already coming in handy, as well. That said; he admits that the game inside the Beltway has changed measurably in recent years. He explains, “I do know how to navigate the Hill, but it is my observation that the Hill that I saw and worked with – I knew what that process was – but I’m not so sure that I’m all that familiar with what the process is today.”

SITREP from the Administrator’s Chair
Laying rest to any uneasiness about his lack of previous commercial maritime experience, Jaenichen hit the ground running at Marad. His assessment of current conditions here at home is particularly telling. “Well, to quote Charles Dickens, ‘this is a tale of several cities.’ If I take a look at the various segments of the industry, there are segments that are very healthy, and there are those that are struggling. If we are talking about the inland rivers and waterways, they are doing okay. They’ve got lots of capital investment. Their challenge, really, has been locks and infrastructure, locks and dams and some weather issues.” He points to Indiana-based Jeffboat as a good example. “I was at Jeffboat back in the August time frame to present them with an $800,000 small shipyard grant. That yard is sold out through 2015 on everything they can produce on their production lines.”
Jaenichen quickly ticked off a succinct assessment of other sectors, as well. “The offshore Gulf of Mexico sector? It’s just going very, very well. Great Lakes? I would say they are in a steady state, their numbers fairly consistent. We have a pretty good idea of where that industry is. It’s not growing but they have some challenges as their commodities change, so we need to keep a close eye on that particular portion of industry. Looking at the Jones Act trades, right now if you look at the order books just from May of 2013, you’ve got 15 vessels, 11 tankers and 4 container vessels. Those are ordered, with options for more. That’s the most ships we’ve seen being built for Jones Act deep water in more than three decades. Some of that’s being driven by oil production, some of it recapitalization of old ships to meet new EPA clean air requirements. I have some concerns about what happens five years from now when all that new shipbuilding is done and levels out. So, I’m a little bit concerned about the health of the shipbuilding industry, but we have a little bit of time to figure that out.
Jaenichen’s real worry should come as no surprise to anyone. His appraisal of U.S. flag vessels operating in International trade is particularly stark. He added, “We did our first national maritime strategy symposium back in January and at that time, we had 89 ships and they were operating in international trade and today I have 86. So that number is continuing to go down. If I go back to the 1950’s, we had a high of about 1,250 vessels operating in international trade and now, we have, deep ocean wise,  just 179 ships, including Jones Act trades but only 86 operating in international trade. That’s a problem. Looking at the 60,000 vessel calls that occur around the nation’s ports every year on an annual basis, we account for 2 percent or less of that traffic. That’s an area we need to focus on as a strategic imperative, and make some hard decisions as a nation on.” Then, he asks: “Is that good enough and are we okay with that as a maritime nation where we don’t have control of the supply chain?”

More than Advocacy: Incentives
Any conversation with Chip Jaenichen always circles back around to strategy, planning and implementation. Not satisfied merely with speaking engagements and industry outreach, he insists that while the outreach is of course important, it also eventually has to translate into action items. And that’s where his unique National Maritime Symposiums – focused meetings with all stakeholders in the same building – come in. He explains, “The national maritime strategy is the easy part. You can get a lot of general and mutual concurrence on what we should do. The hard part is writing the actions to implement the strategy. What I mean by that is that, one of the tax reforms involves tort reform; you need to modify various policies with regard to how US flags are created. One of the comments I got during the National Maritime strategy symposium was – and it resonated with me – it was a shipper, and he said, ‘Hey, don’t make me have to put my cargo on a U.S. flag vessel. Make me want to.’ And so, I followed up later with him to make sure I got what he was trying to say. The point was, he said, we don’t necessarily care about paying a little bit more, if I get better service as a result.”
Jaenichen is looking hard at marine highways, too. “Part of it is that shippers and freight forwarders are creatures of habit. They get satisfied with their existing logistics trades and providing on-time service – they are sometimes not interested in trying something new. So, you really need to incentivize them to try and move it by water. Sometimes, that happens by accident. Say, you have a major thoroughfare and the bridge is out. Now, you can’t get trucks across. Now, maybe water does become the viable option.” The key, says Jaenichen, is monetary or performance incentives. As an example, he points to the container on barge service – facilitated in part by a DOT Tiger grant – running from Stockton to Oakland. “We had to incentivize people. So, we said, we’ll bring back your empties for free if you book revenue cargo heading from Stockton. And, we started doing that. And a couple of other companies said, hey, we’d like a little of that action. In that case, we said – you missed your chance, BUT we’ll charge you $25 less than it would normally cost to bring it back on a truck. So, that service is starting to take off. So, we need to find opportunities to do that around the country.”

Looking Ahead
In the early 1960’s, Marad was split out from the FMC, which took on a more regulatory, active role. Marad meanwhile took on a more promotional role. Jaenichen therefore looks for ways to have a positive impact on the domestic waterfront today. He insists, “What we do understand is that from an infrastructure standpoint in this country, it’s an area that we’ve got to be putting greater focus on. We’re primarily doing maintenance dredging. We need to do more to able to handle the growth and the increasing population that’s coming – by 2050. We’re going to grow to almost 400 million people. So, we need to be able to move about 14 million more tons of freight by that time frame. If we don’t invest in it now, we won’t be ready then.”
The Acting Administrator finished up by putting his unique spin on the job – and the agency he guides. “We need to put together a strategy that ALL of the stakeholders can agree to. We need to build it and then we need to be advocating it to make sure that we get it done. And, yes, we are an advocacy agency, but we do get into cargo preference, reserve sealift for the Department of Defense, the Maritime Security Program which is administered from our agency. So, $486 million of my budget is for sealift. That’s where our focus is from a monetary standpoint. So, we’re not doing the regulatory side, but we’re involved in making sure we understand what industry needs and how we can be in position to help them.” So far, so good. 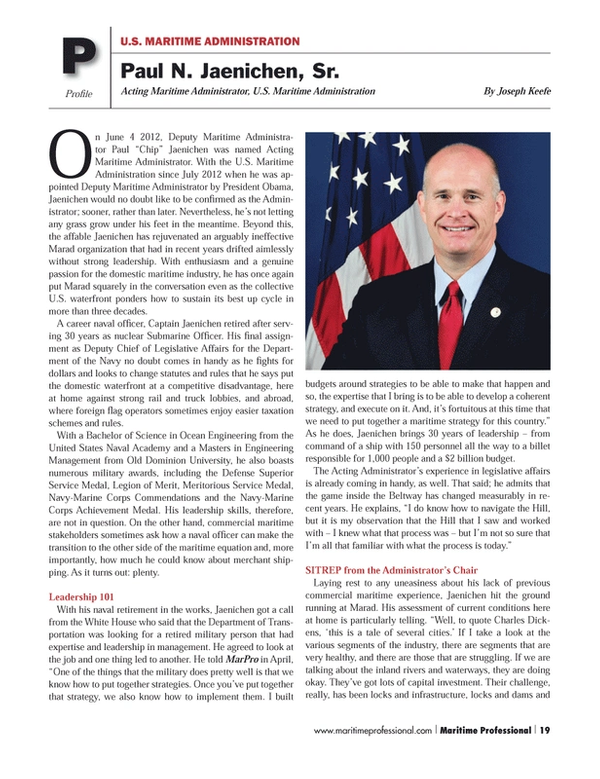