$11-Million Award To Raymond Int'l For Dock Work In Nigeria

Box 22718, Houston, Texas 77027, has been awarded a contract for over $11 million in conjunction with the expansion of the Port of Warri, Nigeria.

Raymond will install concrete cylinder pile foundations for new docks that will increase the port's total number of berths from two to eight.

"Raymond has been actively assisting in the development of Nigeria since the 1940s. In the last decade, the development pace has accelerated, and so has our work there. This new award means that Raymond's contracts in Nigeria during the past two years have a total value of over $40 million," said Henry F. LeMieux, president and chairman.

A Raymond manufacturing affiliate, located in Virginia, will fabricate 36-inch-diameter concrete cylinder piles averaging 82 feet in length. From the plant, piles will be barged nearly 6,000 miles to Warri.

"This project is our first opportunity to utilize the Raymond precast, prestressed concrete cylinder pile in Nigeria. This pile is a superior construction material for marine projects because of its great structural strength combined with a high resistance to corrosion, damage from marine life and water action," Mr. Le- Mieux added.

Foundation construction on the 6,500-foot-long wharf is scheduled to begin in December of 1977 and to be completed in the latter part of 1978. Raymond will also perform soil boring tests at the site.

In the Arabian Gulf, the company is using concrete cylinder piles for construction of a six-mile-long liquefied petroleum gas pipeline support trestle under a contract for about $150 million.

The concrete cylinder piles for that project are being manufactured at a Raymond plant located in the United Arab Emirates and barged 400 miles to the construction site at Ju'Aymah, Saudi Arabia. 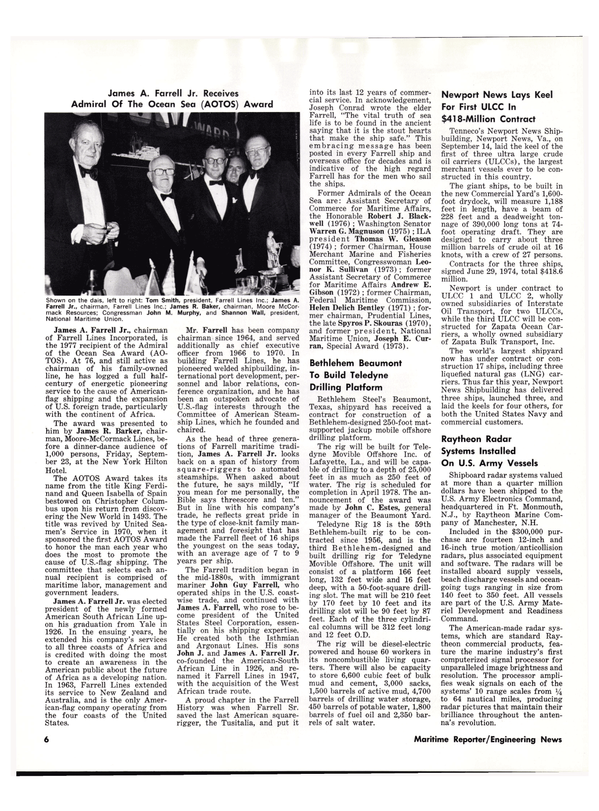