Avondale Shipyards, Incorporated, New Orleans, La., a subsidiary of Ogden Corporation, recently launched the second of a series of four segregated ballast tankers for The Standard Oil Company (Ohio). The new ships will sail under charter to SPC Shipping, Inc., a wholly owned subsidiary of SOHIO.

This tanker is the Keystone Canyon, 165,000 deadweight tons, and named after a geographic area in Alaska of spectacular scenic grandeur. Her length overall is 906 feet, beam 173 feet, depth 75 feet. The operating draft of the Keystone Canyon carrying Alaskan oil is 55 feet, and her cargo capacity including 11 tanks is approximately 1,200,000 barrels.

With steam propulsion and a maximum continuous rated horsepower of 26,700 shp, the ship's service speed 80 percent MCR will be 14.1 knots full load, and 16 knots ballast.

Among the most interesting features of the Keystone Canyon are her special environmental protection and safety features, which include segregated ballast tanks, inert gas system, fixed tankcleaning equipment, collision avoidance radar and Loran and Omega navigation systems.

While somewhat smaller than some of the tankers used to transport oil between continents, the Keystone Canyon is the largest thus far to be specially built for Alaskan service. Along with her sisterships, she will also rank as being among the safest and most modern. The first SOHIO tanker, the Atigun Pass, was launched at Avondale on June 4, 1977, and two more will quickly follow.

Launching ceremonies began with the National Anthem, with soloist Keith Harmeyer, followed by a moving invocation by the associate pastor of the Saint Charles Avenue P r e s b y t e r i an Church, Dr. Walter A. Bennett.

Edwin Hartzman, president of Avondale Shipyards, Incorporated, then took the podium to deliver a welcoming address and to introduce the distinguished guests on the launching platform.

The principal speaker for the occasion was Frank E. Mosier, senior vice president-marketing and refining, Standard Oil Company of Ohio. Shortly after his address, the charming sponsor of the vessel, Mrs. Paul D. Phillips, wife of Paul D. Phillips, senior vice president-finance and administration, The Standard Oil Company (Ohio), was escorted to the podium by Mr. Hartzman to say a few words before the moment of launch.

Mrs. Phillips then raised a silver hatchet to sever the cord that sent the champagne bottle winging down to the bow of the ship to smash against her side. One of the most interesting sights for launching guests was to see how Avondale Shipyards employed its giant $26-million floating drydock to launch the Keystone Canyon.

The ship was moved into the drydock from the building ways nearby about two weeks prior to the launching.

The Keystone Canyon will stand out as being among the safest and most seaworthy ships in the world. A long list of modern navigational equipment to be installed includes computerized collisionavoidance instruments, weather map facsimile reproduction equipment to help avoid storms, echosounders to measure water depth, a Loran navigation system to determine the ship's position within yards by monitoring special radio signals, and an Omega navigation system to e l e c t r o n i c a l l y fix a ship's position within two miles anywhere in the world. Inert gas systems on the new tanker will guard against danger of fire or explosion from vapors which can form in empty or partially empty oil cargo tanks.

The Keystone Canyon will be equipped with a waterless cargo tank washing system. The device uses an oil spray in the inerted tanks instead of seawater to clean oil residue from the sides of cargo tanks as they are emptied.

This eliminates another potential source of water pollution.

Two main boilers instead of one will assure the tanker of maneuverability in the event of a breakdown.

Outfitting of the Keystone Canyon at Avondale will take several months, but when she enters service for her owners she will carry North Slope crude oil from Alaska to ports in the lower 48 states or for transshipment through the Panama Canal.

Avondale Shipyards, Incorporated is a subsidiary of Ogden Corporation, which operates in the major market areas of metals, transportation, and food. 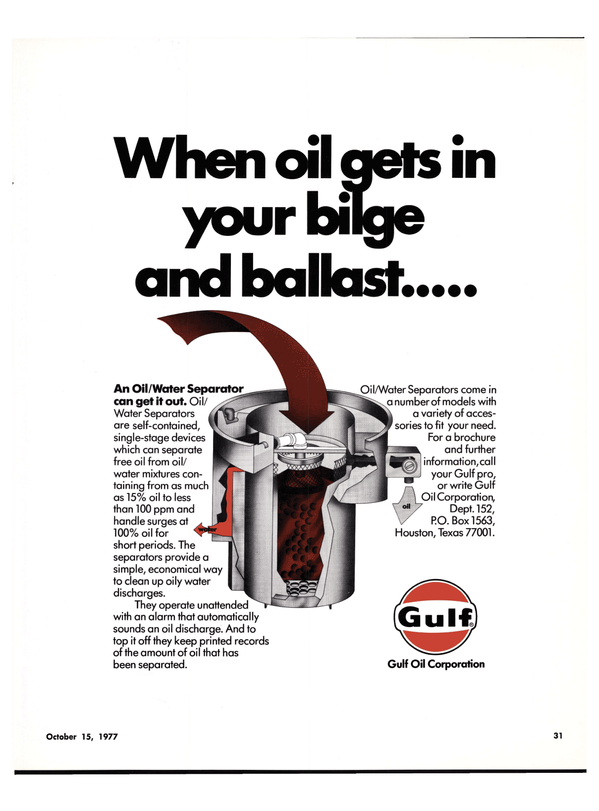