Levingston Shipbuilding Company recently launched the motor vessel Pride of Texas at its Orange, Texas, shipyard. The 36,000-dwt dry bulk carrier was christened by Mrs. Valerie Nemirow, wife of Assistant Secretary of Commerce for Maritime Affairs Samuel B. Nemirow, in the presence of some 750 guests and about 2,000 shipyard workers and their families.

The Pride of Texas is designed to carry grain and other dry bulk cargoes in the foreign trade of the United States for the Levingston Falcon Shipping Company, a partnership of Levingston Shipbuilding and the Falcon Group of Houston. She is powered by two Transamerica Delaval Enterprise DMRV-12-4, medium-speed diesel engines having a total maximum continuous rating of 14,824 bhp at 450 rpm. Her maximum speed will be 17 knots, but fullload service speed is 15.7 knots.

The vessel has been built to meet all the requirements of the American Bureau of Shipping and the U.S. Coast Guard for unlimited ocean service. She will be manned by a crew of 26.

First in a series of five such ships for the same owners, the Pride of Texas is the first dry bulk carrier to be built in the U.S.

that is specifically designed for service in U.S. foreign trade, in competition with ships of foreign owners. She is also the first vessel to be built in the U.S. to a Japanese design and with the assistance of Japanese shipbuilding experts. The design is the highly successful "Future-32" standard bulk carrier developed by Ishikawajima- Harima Heavy Industries Company, Ltd. (IHI) of Tokyo.

For the past 18 months shipyard engineers from IHI have been assisting Levingston personnel in an unprecedented "Technology Transfer" that is designed to help improve U.S. shipbuilding productivity.

The principal speaker at the christening ceremony was Samuel B. Nemirow, Assistant Secretary of Commerce for Maritime Affairs. Other speakers were Edward E. Paden, president of Levingston Shipbuilding; C.C. Wei, president of Falcon Carriers; and Yotaro Kanoh, director of the International Division of IHI.

In the platform party for the christening ceremony were: Lester Rosenblatt, president of The Society of Naval Architects and Marine Engineers, and Mrs. Rosenblatt; Father Patrick J. O'Shaughnessy of St. Thomas Catholic Church in Hattiesburg, Miss., who gave the invocation; and other officers of Levingston Shipbuilding Company and its parent Ashland Oil, and from the Falcon Group.

Levingston has built more than 700 vessels of all types since it started steel ship construction in 1933. Of this total, 164 were for the offshore industry—including nine drillships, seven semisubmersibles, nine jackups, and 139 barges and tenders of various types. The company has also built 167 vessels for the U.S. Government including four frigates, the first surface-effect ship, and 162 tugs and coastal vessels. For the commercial marine industry Levingston has built a total of 372 vessels, mostly barges of various types and sizes but also tankers, roll-on/roll-off ships, and ferries. 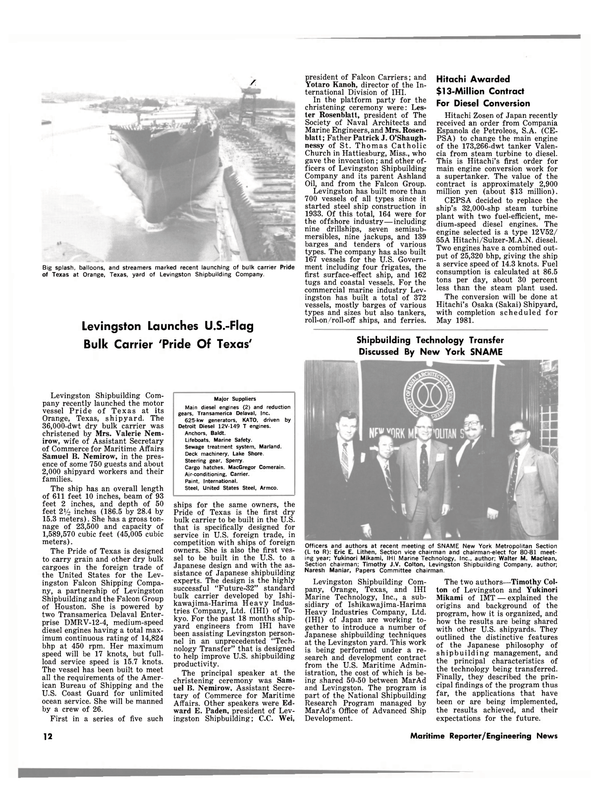