Freeport Shipbuilding & Marine Repair, Freeport, Fla., is constructing a 110-foot steel-hulled yacht designed by the late John Brever of Florida, with interior by Dallasbased CD A.

The vessel will be christened Alpha Centauri when delivered to Star of Texas, Inc., founded by Dallas businessman G. Ray Miller.

Mr. Miller and Jim Murray, president of Freeport Shipbuilding, decided to fashion the 110-foot hull from a combination of existing designs in order to make the boat as tough as any at sea. This requirement was fulfilled by a 23-foot bow (measured from keel) fashioned after a North Sea workboat, the stern fashioned after a deepsea fishing boat, with the entire hull made of solid 5/16-inch steel.

The Alpha Centauri is considered a new concept in "space" ships, a fact that is evident in its height of 42 feet from keel to mast top, and its 27-foot beam. Mr. Miller's scheme was for a ship capable of accommodating anyone's fantasy. His concept in this case encompasses room for on-deck stowage of a Maule (STOL) seaplane, a 27-foot Boston Whaler Outrage complete with tuna-tower and twin 225-hp engines, a 15-foot Boston Whaler, a 13-foot hard-bottom Zodiac and at least two Waverunners and Windsurfers.

The "Sports Yacht" is equipped with a 10-ton-capacity crane to move the Maule, as well as the other boats, on and off the deck.

Alpha Centauri, the mother ship, will be available for charter, primarily in the Caribbean, by fishing, diving and business groups.

For free literature on the facilities and capabilities of Freeport Shipbuilding, Circle 6 6 on Reader Service Card 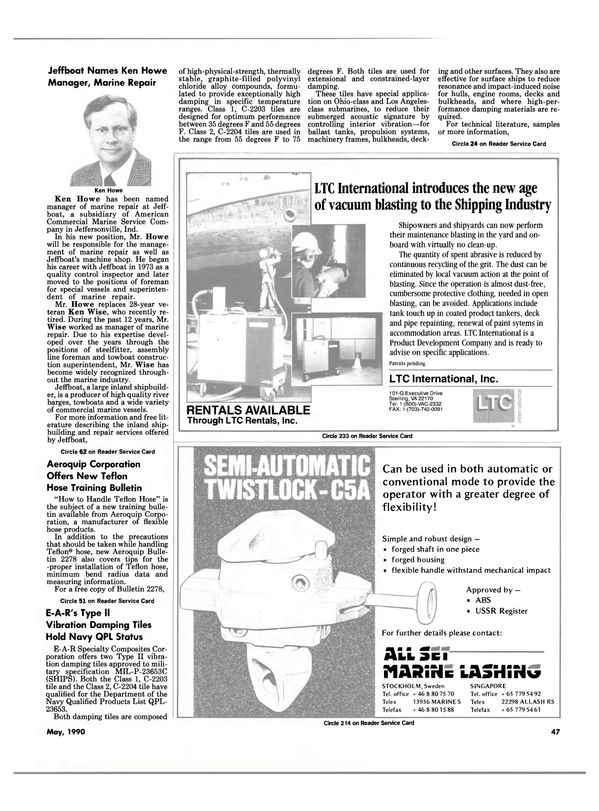 Read Cummins-Powered Yacht At Freeport Shipbuilding in Pdf, Flash or Html5 edition of May 1990 Maritime Reporter