Is there an electronic Oil Record Book in the future of the maritime industry?

There could be. Will charters be negotiated and signed electronically? They can be, but they do not have to be. Will the new rules of electronic signatures and electronic record keeping change the maritime industry? Most certainly.

Are the new rules simple to apply? Not at all.

The rapidly accelerating use of electronic commerce in all industries demands changes in the traditional "paper and pen" foundation of legal documents. The "high tech" community has been a strong proponent of the need for change for several years. Initially their efforts focused solely on electronic signatures. More recently, the acceptance of electronic records was added to the list of demands, a change that brought an explosion in the scope and potential impact of this proposal.

The use of electronic signatures is not mandatory, but state law can no longer discriminate against them. Notarization and acknowledgement of a signature can also be satisfied electronically.

Only the method of signing a document and forming a contract is affected.

All other rights and obligations under any applicable Federal or state law remain the same, including the Federal and state laws that prohibit unfair and deceptive acts and practices.

E-SIGN affects contracts and other legal documents between consumers, between businesses, and between businesses and consumers It does not affect "governmental" transactions, such as an application for benefits, enforcement actions, etc.

Does This Mean A Paperless Future for the Maritime Industry?

No. First and foremost, the use of electronic signatures is not mandatory.

No party can be forced to accept an electronic signature.

Likewise, no party can be forced to insure a paperless transaction. The P& I Clubs have already expressed considerable reservations about insuring such transactions by excluding from coverage participation in electronic trading and the carriage of good pursuant to a paperless contract of carriage.

Many people may take a "wait and see" attitude because of the many questions raised by E-SIGN that remain unresolved. For example, the pre-emption of state law relating to signatures can be avoided by a state that enacts, without change, the Uniform Electronic Transactions Act ("UETA") adopted by the National Conference of Commissioners on Uniform State Laws. If a state adopts a statute, regulation or rule of law that changes the scope of UETA in a manner is inconsistent with or not permitted by E-SIGN, then the provisions of E-SIGN prevail. Even if a state has adopted UETA without modification, there are provisions of E-SIGN that are not included in UETA (such as certain consumer protection provisions). In the absence of similar state law provisions, the E-SIGN provisions would apply even if the state has adopted UETA.

Adding another layer of complexity to this already complicated scenario is the fact that more than 30 states adopted UETA before E-SIGN was enacted.

Therefore, each state law will have to be assessed for whether it is "consistent" or modified as permitted with E-SIGN before a decision can be made as to which law applies. Because E-SIGN creates a whole new area of federal contract law, there are no precedents to guide or help make those determinations.

Legal disputes that trigger these issues will be operating in new, uncharted territory.

Electronic Record Keeping and Reporting Could Bring Major Regulatory Changes Central to all regulatory programs, including those that govern the maritime industry, is the requirement to keep records and to report information to the regulator. E-SIGN now makes it possible for such records to be kept and reported electronically. Contracts and other legal documents can also be prepared and maintained electronically.

E-SIGN requires records to be in a form that is capable of being retained and accurately reproduced for later reference by all parties entitled to retain the contract or record. If this standard is not met, the legal effect, validity or enforceability of the electronic record may be denied.

Government agencies can still require the submission of records with specified standards or formats. Federal and state regulatory agencies may also require retention of a record in a tangible printed or paper form if there is a compelling governmental interest relating to law enforcement or national security. Otherwise, a federal or state regulatory agency has no authority to impose such a requirement.

Regulatory agencies can, however, use their rulemaking authority to establish "performance" standards for retention of contracts and records to assure their accuracy, integrity, and accessibility.

An electronic Oil Record Book could, therefore, be 011 the horizon. Instead of having to go to the location of the Oil Record Book to make an entry, a Chief Engineer or a Chief Mate could enter required information from any computer, hand-held or desktop, around the vessel and then electronically sign the entry. The Master could then review and sign each page electronically, with the Oil Record Book and its entries sent electronically to shore and to Coast Guard at periodic intervals. The possibilities continue with Port State authorities requiring electronic access to the Book to review, search and track its contents. This possible future world for the Oil Record Book replicates itself with every record keeping and reporting requirement, from crew injury reports, to International Safety Management documentation, to financial reports.

What Will Constitute an Acceptable Signature?

E-SIGN is aggressively "technology neutral." Neither the Federal nor a state government can enact statutory or regulatory requirements dictating a specific technology or technical specification for performing the functions of creating, storing, generating, receiving, communicating, or authenticating electronic signatures or records. Regulations can be adopted that provide for the acceptance and use of electronic records and signatures, as long as the provisions are consistent with E-SIGN, do not give greater legal status or effect to a specific technology used to create or store the document, and do not impose unreasonable costs on the acceptance and use of electronic records.

When Will E-SIGN Become Effective?

E-SIGN becomes effective on October 1, 2000, except with respect to any requirement for retention of a record imposed by either Federal or state statute or regulation, in which case the date is delayed until March 1, 2001. The effective date can be delayed further to June 1, 2001 if, on March I, 2001, a Federal or state regulatory agency has taken any action to begin, even if not completed, a rulemaking to promulgate performance standards to govern the documents and record keeping requirements governed by its rulemaking authority. Therefore, if, prior to March 1, 2001, Coast Guard initiates a rulemaking to determine performance standards to govern maintaining in electronic form various reports and documents required by its regulatory programs, the effective date for implementation of E-SIGN for those reports and documents would be delayed until June 1, 2001.

Federal credit programs are governed by their own effective date. ESIGN applies only to transactions entered into and to any loan or mortgage made, insured or guaranteed on and after one year after the date of enactment of ESIGN, June , 2001.

Much Work Remains to Be Done No matter when it becomes effective, ESIGN is likely to have a major impact on the future of the maritime industry. But before any electronic commerce is undertaken or electronic records kept as the "official" copies for regulators, a careful assessment of that action should be undertaken.

Government agencies will also have to decide how and under what circumstances reporting to regulators is done electronically. 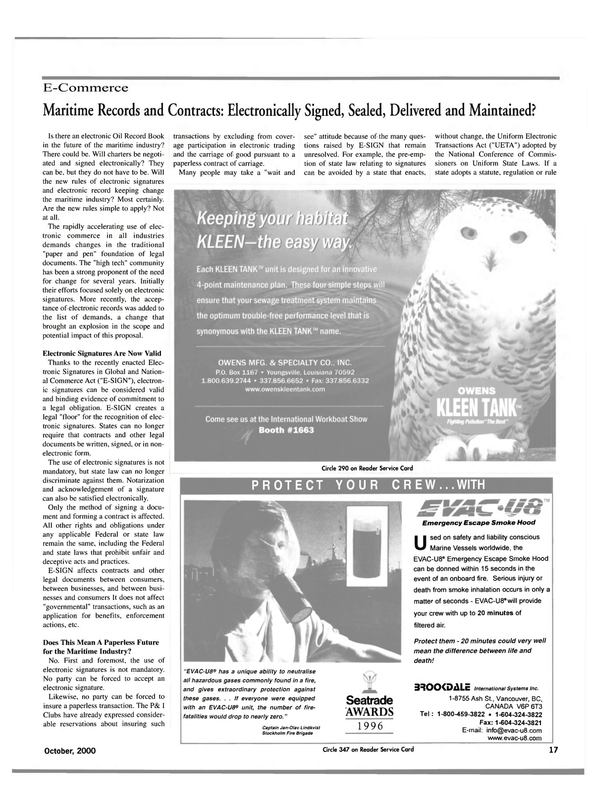