Improving Fuel Efficiency and Maintenance Time Within The Chevron Fleet

Live water systems free of sea life are one reason why the Chevron fleet runs more efficiently and economically than others. Since 1995, a number of Chevron Shipping Company's crude oil tankers have been operating smoothly with electrochlorination systems, the generators of hypochlorite that in turn prevent the fouling of live water cooling systems.

Hypochlorite is the active ingredient required for bio-fouling control. Produced in situ by the cell assemblies of the electrochlorination unit, the system eliminates microbiological organisms and macroinvertibrates without the need for back flushing or periodic cleaning.

This saves valuable time when ships are in dry dock for annual maintenance and repair.

According to W. N. Andrew, chief of Fleet Maintenance at Chevron, the units have saved an additional three to four days of ships time per year. "We have virtually eliminated main condenser cleanings," says Andrew.

better vacuum as an average over a year due to the Chloropac anti-fouling action," notes Andrew. The upgraded vacuum not only improves the flow of cooling water to the heat exchange surfaces, it provides for an ample supply of oxygen throughout the piping systems.

There are in fact a number of hidden costs that may be avoided with electrochlorination.

For example, the amount of fuel saved can be substantial.

Chevron, a company that knows the value of petroleum, had installed electrochlorination units on a number of its tankers to run as economically and fuel efficiently as possible. In calculating the fuel savings with electrochlorination, Andrew stated that there is approximately a two to three ton-per-day savings for each vessel.

The fuel savings and the savings in maintenance and repair help to pay off one electrochlorination system in six months to a year. This was in fact the case at Chevron, where Andrews stated "the units have met our expectation for performance improvement and cost reduction, validating our estimated project payback time of less than one year." According to USFilter's Electrocatalytic Products, a designer and manufacturer of Chloropac® electrochlorination systems, the cost of maintaining the units is minimal. "The cell assembly is designed for high velocity so that the cell may be flushed while in operation, notes Louis Lombardo of USFilter's Electrocatalytic Products. "This prevents calcareous deposits within the cell assembly and serves to protect the coated cells for approximately five to seven years." According to Lombardo, the Chloropac unit operates efficiently in a wide range of seawater temperatures.

"The unit is designed to continue operating in seawater below 14 degrees C, the point at which other systems shut down.

Designed for the needs of large and small vessels, the Chloropac system is typically installed in machinery spaces near seachests, avoiding long pipe runs, while the air-cooled controller/ power supply is conveniently placed near the generator flat.

The sodium hypochlorite output of the cell is directly related to the current passing through it. This allows for automatic operation and control of output. In fact, the DC cell power allows for adjustments in output between 0-100 percent. 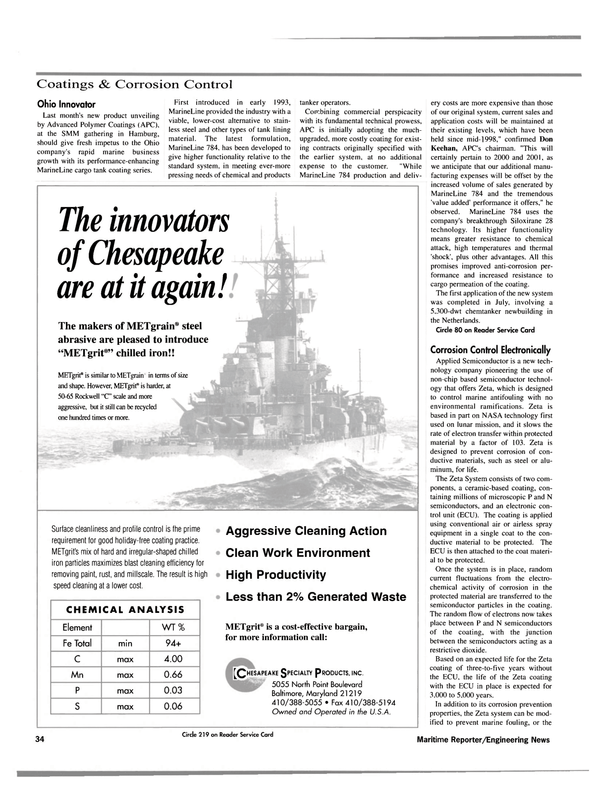