Back in Business — Iridium Returns Under New Ownership

When Iridium, the $5 billion satellite company, fell into bankruptcy on March 18 2000, it went down as one of the costliy- est corporate ficiscoes of all time. More than one year later, Iridium is back in business, though under completely new ownership. Iridium raised a few eyebrows and a fair share of skep- tics with its decision to CEO Iridium launch its global satellite communications services. How could the new company prosper when the previous one — using the same technology had failed? Enter Gino Picasso, the company's CEO. Up front and honest, Picasso says that the new Iridium is no pipe dream. Speaking via telephone from a restaurant near Iridium's Tempe, Ariz, offices, Picasso shared his visions and ideas with MR/EN regarding the future of the new company.

By Regina P. Ciardiello, senior editor On Wednesday, March 28, 2001 Iridium Satellite LLC called members of the media and the satellite communications community to a press conference in Washington, D.C. announcing its return to the satellite communications market. Subsequent to more than three months of quality assurance testing. Iridium expressed that its gateway was fully operational out of Tempe, Ariz. — making the commercial launch of its global satellite communications a reality. Many probably wondered, "Was this the same Iridium that filed Chapter 11 almost a year to the date of its re-launching?" But ask the company's CEO Gino Picasso, and he will say that the differences between the old and the new companies are like night and day.

"The fact that the current satellite system was purchased for $25 million — rather than $3.5 billion gives us a huge cost advantage," Picasso said. "The total monthly operating costs for the company are less than one-tenth of the original Iridium." The advantage of the new Iridium is straightforward.

Since the company had already established a satellite system, it did not need to start from the ground up. The systems were already in place and were just waiting for Picasso and his team to work the technological ideas into the fray. Not to mention the fact the new Iridium already has committed, signed contracts from the U.S.

Department of Defense, as well as 13 service provider agreements, who are offering worldwide distribution capabilities. These non-exclusive agreements, which were signed even before Iridium launched its services, enable the providers, namely GEOLINK, Marconi Marine, Stratos and Infosat Telecommunications, to sell Iridium's services to industrial and government markets.

With a business plan in place, the company, whose Satellite Network Operations Center is currently located in Leesburg, Va., brought highly regarded Boeing Company into the mix for technical support. Boeing's involvement in the new Iridium entails all engineering, technical, operations and maintenance support for the system that includes 66 operational satellites, as well as seven spares in orbit. Iridium also has gateway operations out of Tempe, Ariz, location, and in Hawaii, which handles the services for the U.S.

Department of Defense. According to the company, the multi-year fixed contract with Boeing, all marketing and promotional expenses and Iridium Satellite's LLC debt service on the closing note to Iridium LLC, who is the previous owner of the satellite system, will not exceed more than $7 million per month. This plan represents a significant decrease of the original Iridium's operating expenses, thus giving the company more leeway in terms of pricing and break-even threshold.

No Pipe Dreams Here — Only Reality "Why are we going to succeed — because we are able to," Picasso said. "The numbers add up and they are compelling — there is no doubt in my mind that we will break even." According to Picasso, already one-third of Iridium's services are contractually committed — demonstrating that there is a demand for this type of service. "There's no market to prove when the market is already there," he said.

Picasso is referring to the company's focus on government and industrial users who have a proven track record of satellite phone utilization in remote areas — areas such as heavy construction, defense/military, maritime, oil and gas, and aviation. Picasso hopes that the mix of intelligent marketing strategies, new technology, a system that is the only truly mobile and global one available, as well as a cost-effective pricing will lead Iridium into the forefront of the satellite communications market.

According to Picasso, the company will target the vertical markets, (marine, aviation, oil and gas, etc.), as well as more broad-based groups, proving Iridium is "more than just a cell phone company" offering cost-effective, easily portable phones for half the price of its competitors. "Which would you rather do, carry a lap top or a small phone that fits into your hand," Picasso said. "With other models you have to set up an antenna and walk and talk at the same time - the Iridium phones don't require this." The new Iridium phones are not bulky and awkward to handle, and the company's 9505 handset is touted as the smallest satellite phone available. Measuring 158 x 62 x 59 mm, the 13.2 oz phone is expected to retail at approximately $1,500. including accessories, and will be available for purchase in August 2001. Specialty equipment geared to address the needs of maritime customers is also offered, mainly Iridium's Fixed Mast Antenna, which is marine rated for permanent vessel or building mounting and provides optimum reception for all of the company's satellite products.

Estimated costs (which are set by Iridium's service providers) for the satellite Series 9500 are less than $1,000 and airtime rates are expected to steady at $l.50/per min. — with no additional long distance, roaming or zoning charges.

As Picasso and his team fully realize, trying to shoehorn the same old product to a market that rejected it some 12 months earlier would be a mistake. Thus, the new company, realizing the diversity of needs in the maritime realm, but understanding the core desire for seamless communication, increased data capability, innovative add-on services and, of course, affordable cost, bringing to the table innovations it believes will make it a success.

The company plans to keep on the cutting edge of technology, and predicts that it will provide short burst messaging service within 12 months' time.

Launched in June 2001, Iridium's data and Internet services are viewed as crucial for remote mobile telecommunications.

Iridium's dial up data capability provides connectivity to corporate data users at 2.4 kpbs, while the company's direct-Internet data services provides a connection at 10 kbps - providing a quick connection even to those based on an oil rig located offshore Gulf of Mexico.

Even more attractive is the company's data services are included with voice telephony charges — all for the same price of $ 1.50 per/min.

Head of the Table While Picasso may sit at the head of the Iridium helm, he is quick to credit his colleagues, whom he describes as technology driven — specifically Dan Colussy, Iridium's chairman. Colussy, who this past December, along with a group of private investors purchased the assets of Iridium LLC, had a tremendous vision in seeing to it that the Iridium got off the ground. "Dan pulled together the investors (Boeing, Motorola), which is nothing short of phenomenal," Picasso said. "With the business structure in place, the hardest part is done — all the parts and pieces finally come together." As for himself, Picasso sees his position at Iridium as the greatest opportunity that he has ever experienced. Referring to his tenure at Iridium as "absolutely extraordinary," Picasso said.

"Personally speaking, my career ambition has been met by seeing this (Iridium) through — it's a perfect match," he said. "While it's a tremendous undertaking and a tremendous innovation, I am absolutely satisfied." A seasoned technological "guru," Picasso's resume proves that he is capable of driving Iridium higher into the sky. Boasting more than 20 years of experience within the telecommunications and international satellite networking arena, Picasso was previously president and COO of Ace*Comm Corporation a provider of support systems (OSS) software to telecommunications service providers. While there, he directed and expanded global sales, increased the company's profitability, while streamlining and reorganizing operations ensuring the company's place in real-time data warehousing and infor- mation delivery systems crucial to future communication network operators.

All the while, Picasso thought about (the former) Iridium, which at the time was just starting up. The ideas and innovations were in place, but many skeptics theorized (as it turns out correctly), that it wouldn't work.

Picasso, however felt otherwise. Ironically, Colussy and his investors contacted Picasso, who had by then moved over to Ace*Comm. and invited him to share in their vision for the new Iridium.

While he was more than satisfied during the year-and-a-half that he was with ACE*Comm, Picasso felt that the invitation to lead Iridium was too good to pass up. "The opportunity to make an impact on the world of communications goes beyond anything that I could ever have imagined," he said. "Just the impact that it makes on our civilization alone is unimaginable." Picasso predicts that within the next couple of years, it will be proven to the world that satellite communications is a great value. The company is already planning to launch seven additional spare satellites in 2002. But, what happens after that?

"In three or four years, I would like to bring satcom to areas that had not been serviced previously." Picasso said. "I am confident that we can do that because we don't have to create a new market. The technology is there and we can accomplish this by melding together new markets with new technology." 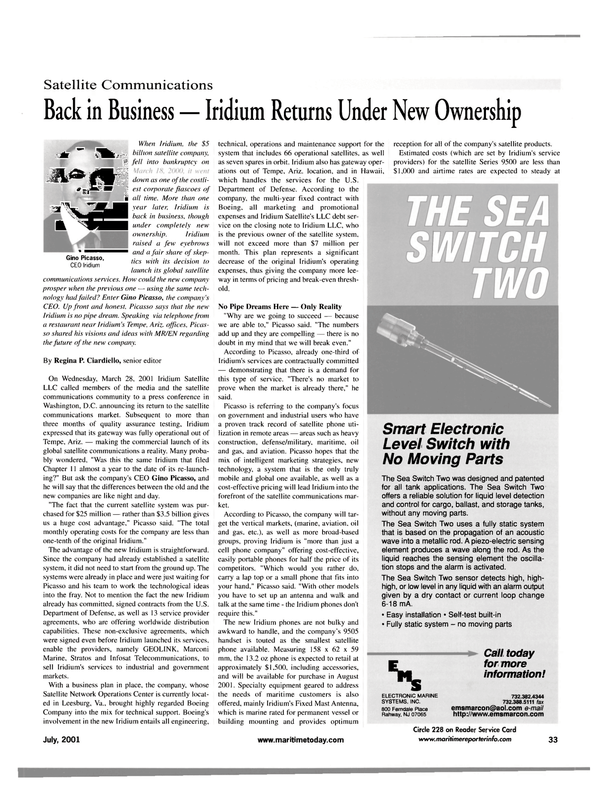 Read Back in Business — Iridium Returns Under New Ownership in Pdf, Flash or Html5 edition of July 2001 Maritime Reporter