NorShipping 2001, held in Oslo, Nor- way in early June, once again proved to be a dynamic exhibition complete with some of the more influential personnel in the marine business on-hand for the week long event. As usual, marine man- ufacturers used the platform of NorShip- ping to launch new products, systems and services to the international market, some of which is detailed in the following report.

Wartsila Corp., the ubiquitous propulsion system manufacturer announced that it had received a contact to supply the complete marine power system for the first of a series of environmentally safe 40,000-dwt chemical/ product tankers building at the San Marco shipyard in Italy. In an interview with Wartsila's Mikael Makinen earlier this year, he stressed that the company was expanding beyond the mere business of manufacturing engines, seeking to become a single source propulsion system provider, or, as the company touts, "The Ship Power Supplier." For the 40,000-dwt tankers, Wartsila will be just that, as it is responsible for the complete functionality of the system.

In addition to supplying the hardware, it will provide the shipyard with all of the functional drawings and will be supervising the plant's installation, commissioning and sea trials. The ship will be equipped with a Wartsila 6L64 medium-speed diesel engine, of 12,060 kW output at 333 rpm and a CP 6,200 mm diameter Lips propeller, together with shafting and reduction gear. The new vessel will measure 563 ft. (171.6 m) long and feature 12 cargo, two slop and one recovery tank. The propulsion package will give the ship a maximum 17-knot speed on a 34 ft. (10.3 m) draft, and a service speed of 16 knots.

While the final standards regarding AIS are still years in the making, Leica — traditionally a company that pushes the innovation edge — has delivered a product in the MX 420, which incorporates a high-accuracy MX 421 GPS/DGPS receiver and an IMO-compliant AIS transponder system, with a combined control and display unit. Optionally, the MX 420 AIS can be interfaced with an already installed GPS or DGPS receiver onboard instead of the MX 421. The AIS transponder module in the MX 420 system was designed and developed by SAAB TransponderTech, and meets all specifications for marine AIS shipboard equipment, and is designed to be compliant with future standards through software upgrades. The combined system takes advantage of another Leica innovation, the MX 421, a typeapproved high-precision GPS/DGPS "smart antenna." It was the first GPS product to use the new Silicon Germanium (SiGe) receiver chip, and was developed jointly by Leica and IBM.

In the wake of corporate consolidations, marine buyers can sometimes be confused as from which house comes which product. ExxonMobil, which completed the granddaddy of all mergers last year in combining the two oil industry behemoths, announced a plan to simplify the marine lubricants buying choice to its deep sea customers. ExxonMobil Marine Lubricants announced that its Mobilgard brand will be the flagship product line offered to deep sea customers. The Mobilgard brand includes a full range of mineral oils and synthetic lubricants for marine engines and equipment.

The company will retain the Esso and Exxon brand of marine lubricants for the coastal and inland sectors.

The new system allows customers to gain access to their specific accounting information, including online lube charts, through the Internet, without adding new software.

Transas Marine, another company synonymous with advanced marine technology, in June launched the first of its new generation Navi-Sailor navigation systems, Navi-Sailor 3000. The system incorporates all the functionality of the previously type-approved ECDIS with an additional array of innovative features.

According to Peter Mantel, director of marketing and business development, Transas made the decision about a year and a half ago to invest in a new platform that would satisfy the technological needs of today and tomorrow. The system has been designed with flexibility in mind, as it features: the option of North- Up/Course- U p / H e a d - U p chart display modes; integrated weather forecasting, multiple chart display and user-selectable screen layout; advanced Route Planning, Radar Overlay and Playback facilities; Relative and True Motion display; and an advanced (U)AIS transponder interface, that will be modified with the final specification come out. The company intends to launch two additional products in the series later this year.

Other significant developments that occurred throughout the week included: MacGregor announced that its new Sherlog ultrasonic testing system — designed to quickly and easily check the cargo access sealing system — has been type approved.

Lloyd's Register completed a studyto find the optimum solution to the question of how to most efficiently propel the next generation of Ultra Large Containerships (UCLS).

Finland's Loipart introduced a combined fire resistant and thermally insulated door for cold rooms and freezers, the A-60 line. 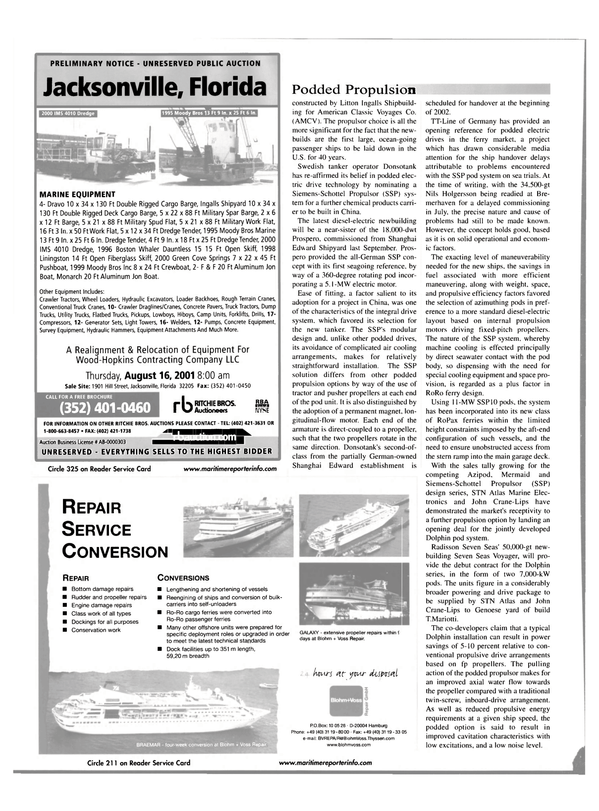