Despite a marked drop in shipbuilding volume during the past decade to lower cost competi- tors in the East, Germany's marine market has maintained it adherence to the highest technical standard while can'ing its niche in the world of constructing complex, high-value vessels. In many ways, the saying "the more things change, the more they stay the same" could be aptly applied to the current status of the German marine market. While the world, and certainly the business of constructing commercial ships for the world fleet, has changed dramatically in the past decade, Germany's role in this market has stayed remarkably on course. Facing steady market erosion to competitors in Japan, South Korea and China, German yards and ships equipment suppliers have maintained the mantra of quality product and quality construction.

While most of the German shipyards are well-regarded for producing high-value, quality ships, Meyer Werft GmbH in Papenburg undoubtedly is one of the first companies that comes to mind when discussing superior performance, in Germany and around the world.

The shipyard itself is an engineering wonder, situated for more than 200 years in the Northwest corner of Germany, near the Dutch border, and nearly 40 km from the sea on the River Ems. Shipbuilding is conducted in a totally enclosed facility, and high importance is placed on ensuring a smooth and efficient workflow. By next year the yard will have built 14 luxury cruise liners between 40,000 and 90,000 gt, and work is currently underway to ensure the shipyard's prosperity in the long term.

While Meyer Werft has enjoyed great success in building ships for the international cruise market, it was previously unable to build the cruise behemoths which are currently in demand because of its facilities and because of restrictions posed by transporting the ship to sea on the River Ems.

This mammoth building — scheduled for completion soon — combined with a new River Barrier system — scheduled to be in operation by 2002 — will allow the shipyard to build the largest class of cruise ships on the market today. In total, the company has invested about $100 million for the new building facility and the needed prefab area, outfitted modular roller system which allow ship blocks to be moved without a crane, and outfitted with the latest laser cutting machines.

While Meyer Werft is most closely associated with the cruise ship market, it constructs a variety of high-value vessels — including Ferries, RoRo ships and Gas Tanker — for owners around the globe. The yard also has what it believes to be the largest series of passenger ships ever built, as between 1983 and 1998 it delivered 20 vessels for operation around the island nation of Indonesia. Additional vessels of the series are expected this year and next.

The three German shipyards under the Thyssen Krupp Werften GmbH Group — Blohm + Voss GmbH, Blohm + Voss Repair GmbH, and Thyssen Nordseewerke — collectively increased sales 10 percent in 2000 v. 1999. Most notably, Blohm + Voss sales surged 53 percent, from approximately $315 million to nearly $483 million. The jump in the orderbook for 2000 for the Emden and Hamburg-based yards was due in large to orders for South African and Malaysian naval vessels, five containership and the consortium's share in a four-submarine order. The non-naval orderbook at the end of 2000 totaled about $3.4 billion, and was comprised mainly of cruse ships being built at Blohm + Voss in Hamburg and 2,500 teu container vessels being built at Thyssen Nordseewerke in Emden.

Always well-regarded for delivering a healthy dose of innovative technology, Blohm + Voss delivers on that reputation again with the delivery of the 800-passenger Olympic Voyager, a Fast Monohull passenger vessel handed over to its Greek owners at the end of 200. Powered by four Wartisila medium speed diesel engines which product a cumulative 37,800 hp, the twin-screw 24,500-gt vessel has a cruising speed of 28 knots at 85 percent MCR. The ship is based on the patented Fast Monohull design, which is touted as reducing power installed requirements by up to 20 percent.

The signatures of the design are a very slim underwater body, and large propellers installed in a tunnel. The design originated from in-house, from the talents of Mr. Hans Langenberg, who put his full life experience of hydrodynamics into the project, which curiously started out as a containership design. The quality of the Blohm + Voss Fast Monohull concept was proven when Olympic Voyager was singled out at the prestigious Cruise and Ferry Awards 2001 as the most significant cruise ship newbuilding in the past two years. The event, which was hosted at the Royal Lancaster Hotel in London, saw the Olympic Voyager take the top prize amongst fierce competition for pioneering the fast cruise concept. The panel of judges, who were chosen from such organizations as the International Maritime Organization, the Maritime Hotel Academy and the Royal Institute of Naval Architects.

In the constant battle to increase efficiencies enjoyed by all yards, of all sizes, Blohm + Voss has sought to give greater amounts of work and responsibility to fewer subcontractors working at the shipyard.

This concept came to full fruition on Olympic Voyager, as. in essence, there were three main suppliers features: Kaefer handled the interior; ABB was responsible for electronics and electric; and Aero M took care of heating and ventilation.

Bremerhaven-based SSW GmbH effectively started its shipbuilding under this name in May 1998. and currently focuses on newbuilding of seagoing passenger ferries and midsize ships, as well as RoRo ships, luxury cruise vessels, reefer ships and gas carrers. In early April, the company was putting the finishing touches on Nils Holgersson, a 640 passenger, 22-knot RoPax vessel for TT Line, but was delayed by a problem with the ship's podded propulsion system. At press time the situa tion was still being worked on, but upon delivery the ship will offer a host of innovative advances.

Powered by five MaK engines (two MaK 8M 43's; two MaK 7M 43's; and one 6M 32), the ship will be propelled by two pod drive units arranged aft (each 11,000 kW stepless 0-175 rpm). Sister ship Peter Pan was scheduled for delivery in August, but that date is questionable given the delay with the first vessel. Interestingly, as soon as Peter Pan is delivered, Nils Holgersson will be back into SSW GmbH for a conversion, as the owner wants to eliminate some passenger capacity for additional RoRo space. It will also receive a new name, Tom Sawyer. While SSW GmbH is strictly a new construction facility, it agreed to the conversion because it built the ship.

Apart from the RoPax ships, SSW GmbH also has an order for seven containerships (pictured on page 52) plus three options. The 696 x 97.7 ft. (212.2 x 29.8 m) new design features improved lines, which as a result are intended to provide the same speed with less installed power. The 27,000 dwt. GLclassed ship will have a 22 knot speed courtesy of a Wartsila 7RTA 72 U-B powerplant which generates 21,560 kW at 99 rpm.

Of the 2,500 container spaces available, nearly 14 percent — 340 — are for cool carriers. First steel was cut in April, and the launching is set for October.

Three hulls in the series will be built in Romania, coming to Germany for full outfitting. The last of the seven vessels is due for delivery in mid 2003.

Three shipbuilding contracts exceeding 400 Million DM (172.6 million) were recently awarded to Liibeck, Germany- based Flender Werft. The contracts include a RoRo passenger ferry for Smyril Line of the Faroe Islands, which will be built in accordance with the plans and documents of Flensburger Schiffbau-Gesellschaft. In addition, a pair of 3,600-TEU containerships will be built for Hamburg-based shipowner Claus-Peter Offen.

These newbuildings will be initiated directly following the Superfast Ferries currently under construction at the yard, and will keep the yard fully occupied to the start of 2003.

Greek ferry operator Attica Enterprises took delivery of its new Superfast VII ferry, the first of four sister ships, from Howaldtswerke Werft (HDW) shipyards in Kiel, Germany. Attica's new ferries will be deployed in the Baltic Sea, serving routes between Germany and Finland and Germany and Sweden. Superfast VII will start commercial operations linking the German port of Rostock with Hanko in Finland on May 17. with Superfast VIII joining it in about six months. Attica Enterprises said its new Baltic cruise-class ferries have a capacity for 626 passengers, 85 cars and 110 trucks each. 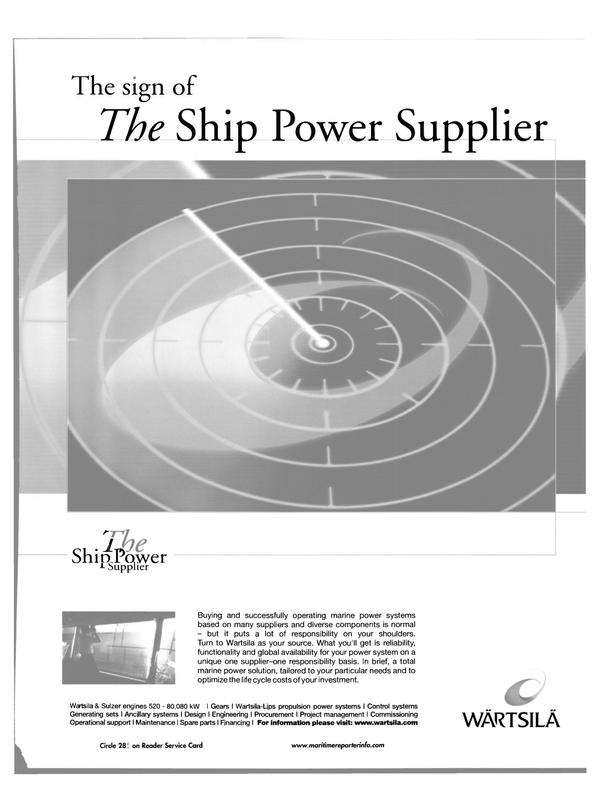 Read Forging Ahead in Pdf, Flash or Html5 edition of July 2001 Maritime Reporter