Bollinger Shipyards, Lockport, La. has added a 220 class offshore supply vessel (OSV) to the company's continually growing series of OSV's that provide cargo capacities of much larger vessels while lowering operating costs. Scott Theriot, executive vice president, New Construction said, "Just as our 145 and 166-ft. class boats have capacities of larger OSV's, this new 220 class has the cargo and drilling muds capacities of vessels up to 240-ft.

MNM Boats of Golden Meadow, La., a subsidiary of C&G Boats, has signed a contract for the first of two new 220 designs and will take delivery of the first boat in October 2002 and the second vessel in January 2003.

Theriot said: "Our success with the first two advanced designs prompted customers to ask for similar space and operational advantages in a larger OSV.

We have achieved this goal with this new design. Its liquid and mud tanks will be able to carry more than 6,000 barrels of drilling mud and its dry bulk tanks will be able to carry more than 6,000 cu. ft. of material. The MNM boats will each have three separate pump systems that can handle three different liquid mud products without danger of contamination." Propulsion power for the MNM 207 x 53 x 19-ft. hull will be provided by two Caterpillar 3516D diesel engines developing 2,000 hp through Reintjes reduction gears with a ratio of 6.44:1. They will drive Bollinger 102 in. propellers and independent rudders. Electrical power will be produced by two Caterpillar 3408 diesels generating 370 kW each. The pilot house will be located further forward and will feature 360- degree visibility free from interference by stacks and will include touch screen computer displays for the boast' dynamic positioning and other control systems.

In a separate contract, Bollinger has agreed to construct two 6,000 hp tugs, and two double-hull, clean product ocean-going barges that meet the requirements of OPA '90. While terms of the contract were not disclosed, one vessel will have a 110,000-barrel capacity, the other will be able to carry 135,000 barrels.

Modules for the first two barges will be fabricated at Bollinger's Lockport New Construction division and shipped to Gretna where they will be joined to other components produced there, where final assembly and installation of other piping systems will be completed.

The first new Bouchard barge. B. No.

The tug, which was designed by Jensen Maritime Consultants, will utilize Ulstein Z-pellers and controls. The pilothouse will have 360-degree visibility; the deck will have a forward winch and bow-loop. 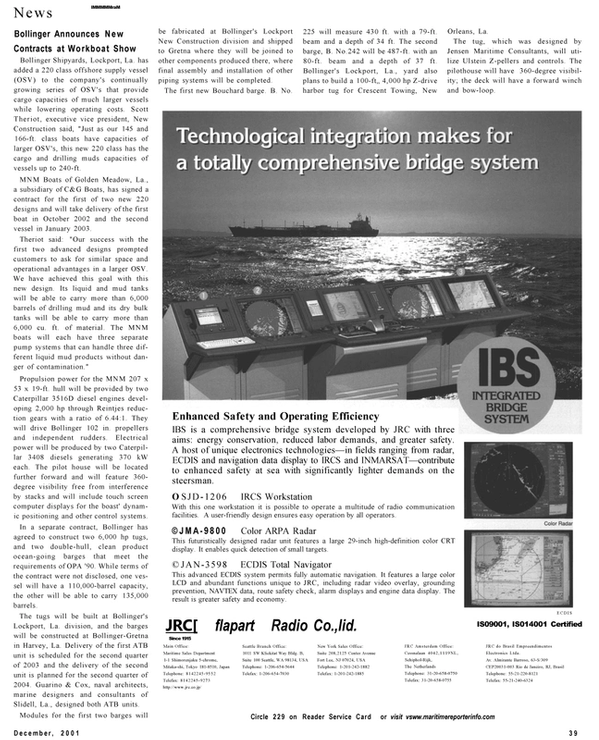