Europe's fledgling offshore wind power industry has produced an order for an entirely new breed of vessel designed to transport and position wind turbines. U.K.- based engineering firm Mayflower Energy has contracted one such vessel from Shanhaiguan Shipyard in northern China on the strength of emerging demand for alternative, 'clean' energy sources.

U.K. government plans call for 1,300 new 2-MW offshore turbines to be brought on stream over the next 10 years, and other littoral European countries have formulated large-scale projects for wind power generation systems. The perceived environmental acceptability of harnessing wind power for electricity generation is a strong motivator for the evident political approbation.

Mayflower's early initiative in offering the sector a purpose-designed newbuild as from February 2003 can be expected to give the group a competitive edge. It has taken out an option on a second ship from Shanhaiguan, and industry sources indicate that as many as six vessels are tentatively envisioned.

The 426-ft. (130-m) design of wind power installation vessel developed by the respected Copenhagen consultancy Knud E Hansen brings together proven technologies in what constitutes an as yet unique class of ship. For instance, it will accomplish offshore placement tasks using six jack-up legs, and 300-ton and 50- ton cranes, while propulsion and positioning will be affected with four 1.5-MW thrusters, giving a maximum speed of 10.5-knots. The vessel has been configured to transport and handle 10 turbines, and will accommodate a full engineering crew of up to 50 persons.

Det Norske Veritas' expertise in the offshore vessel classification will be brought to bear on the project.

Mayflower has engaged the Cardiff-domiciled Graig Group, a shipping, shipmanagement and marine services company with strong connections in the Nordic and Chinese markets, to provide it with technical support for the scheme. Graig's input has already included advice on yard selection, introduction of Knud E Hansen and DNV, and assistance in contract negotiations and technical issues, and will also encompass newbuild supervision. The Welsh firm also hopes that the relationship will extend into the operational phase, by way of technical husbandry of the vessel.

Graig points out that the Shanhaiguan yard in China is no stranger to specialized vessels, having a track record in FPSOs (floating production, storage and offloading vessels).

A commitment in the mid 1990s to a major and ongoing program of multipurpose cargo vessels incorporating a heavy-lift capability opened a new chapter for Graig, such that the company ranks today as a significant player in global project cargo shipping and provider of technical shipmanagement services for 33 vessels. It has also emerged as a leading figure in technical supervision at Chinese yards, a role that has included a series of 19 ships from Zhonghua Hudong.

New Capacity for the Antarctic Just as the vessels built for arduous and challenging offshore tasks testify to the maritime industry's capacity for innovation and propensity for working on new frontiers, that sector of the business involved in operations to the polar regions is characterized by a special verve.

Norwegian firm Polar Ship Management encapsulates that spirit, continually investing in its fleet and acting on new opportunities for its core skills and resources while developing a broader business platform.

Although a traditional, integrated shipping company, its disposition towards tailor-made service packages and vessels for polar expeditions and research, polar resupply, seismic survey, offshore support and cable-laying, sets it apart from conventional, mainstream players in the shipping market.

More power to its elbow has just been conferred by the delivery of the 294-ft. (89.7-m) Polarbjorn, which combines an Antarctic expeditionary and research capability with a suitability for a range of offshore and cable support tasks. The marriage of abilities is expressed in a robust construction and ice bow, large open working deck areas tended by heavy-duty craneage, extensive accommodation and laboratory facilities, and big foreship helicopter platform.

Built in western Norway by Havyard Leirvik, Polarbjorn entered service under the initial employ of energy group Statoil, and is the third new ship to have been commissioned by the company in as many years. Polar Prince, designed for inspection, maintenance, repair (IMR) and subsea inspection tasks, went on five-year charter to Subsea International on delivery from Flekkefjord Slip & Maskinfabrik in mid 1999. A second ship from Flekkefjord, Oceanic King, was adapted after delivery in 2000 for a dedicated cable laying and maintenance role.

Polarbjorn offers 2,900-dwt as a polar-going vessel on 24-ft. (7.2-m) draft, and 3,700-dwt in offshore mode on 25-ft. (7.8-m) draft. Within relatively compact overall dimensions of approximately 295 ft. (90 m) length by 59 ft. (18-m) breadth. Some 780-sq. m. of open deck area is afforded by the aft deck and shelterdeck, plumbed by a 60-ton main crane, with the added facility of 12.5-ton crane for remote-operated vehicle (ROV) deployment or other duties. There are three underdeck cargo hold compartments within the midship parallel body.

The vessel's main propulsion system based on two Rolls-Royce Bergen engines of 4,605-bhp apiece driving a single, nozzled controllablepitch propeller is complemented by an extensive thruster array for position-holding and precise maneuvering. The Brunvoll thruster outfit, amounting to an aggregate 6,725-bhp, comprises two tunnel units forward and two aft, plus a retractable azimuth thruster in the foreship section. The integrated maneuvering and dynamic positioning system is of Kongsberg Simrad origin.

While Polarbjorn carries a standard marine crew of about 16-19, it has been fitted with a total of 100 berths so as to accommodate charterer's personnel.

One of the fleet's modern vessels, the 4,000 gt Ernest Shackleton (ex-Polar Queen), is the subject of a 15- year agreement with British Antarctic Survey (BAS). It had previously been engaged for Australian Antarctic resupply duties and other work, having a broader offshore survey and ROV support capability.

Redundancy at A Premium At an estimated build cost some 25-percent higher than a standard Aframax tanker, classification society Bureau Veritas and French shipowner Services & Transport have come up with a new Ecomax tanker proposal, design-optimized for pollution prevention.

The Aframax-sized vessel would have two independent engine rooms, power supply systems and steering gear, increased hull scantlings, reduced high tensile steel content, and duplicated navigation equipment with off-track monitoring. In the event of failure of one power plant or propulsion line, the tanker would still be able to make 12.5-knots, compared with 16.5-knots from both main engines.

It is felt that perceptions of cost and value have changed since the Erika disaster, and it is contended that build costs would reduce in the face of any future demand resulting in serial or repeat production. Be that as it may, the shipowning sector at large will first register the price premium, notwithstanding the attributes over-and-above a standard Aframax, unless there is a particular business incentive in some shape or form, arising from specific trading or charterer conditions, that can be seen to justify the higher capital outlay. 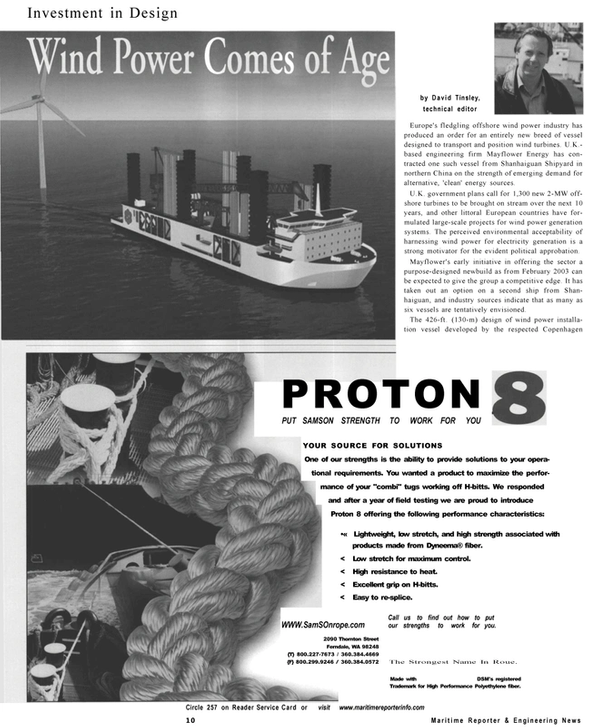