MAAG Gear Ag,a Swiss based company of FLS Industries, Denmark, has been awarded the contract by the Spanish shipyard IZAR, one of the biggest shipyards world-wide for naval ships. The contract covers the supply of five gearbox systems for new F-310 type frigates of the Norwegian Navy. The new frigates will be equipped with the most modern systems available today, including a combined Diesel and gasturbine (CODAG)propulsion system with high efficiency and low noise level gear units. The delivery of the first gearset will be end of 2002, followed by one gearset each year until 2006. The order is included in this years sales budget for naval gears, and the total order intake by mid year for MAAG is considerably higher than budgeted. The gears will connect two Diesel engines type BAZAN Bravo 12 and one gasturbine type GE LM 2500 to two propellers. In CODAG mode, the total propulsion system power will be 30500 kW at a propeller speed of 190 rpm.

The gears are mounted on specially designed elastic mounts in the ship in order to minimise noise radiation to the sea water. The order has been awarded to MAAG because of their superiority in technical solutions for naval ship propulsion gear systems. The main issues are reliability, functional flexi- bility and low noise radiation into the sea water. According to MAAG's sales vice president, Thomas Deeg, this is the company's first order from IZAR for a CODAG gear system.

"It is a very important order for us, and we are very pround that we were chosen by IZAR. It will be the beginning of a continuous and fruitful co-operation for the future, and MAAG is one of the major suppliers for such gear systems world-wide" Circle 55 on Reader Service Card www.maritimereporterinfo.com 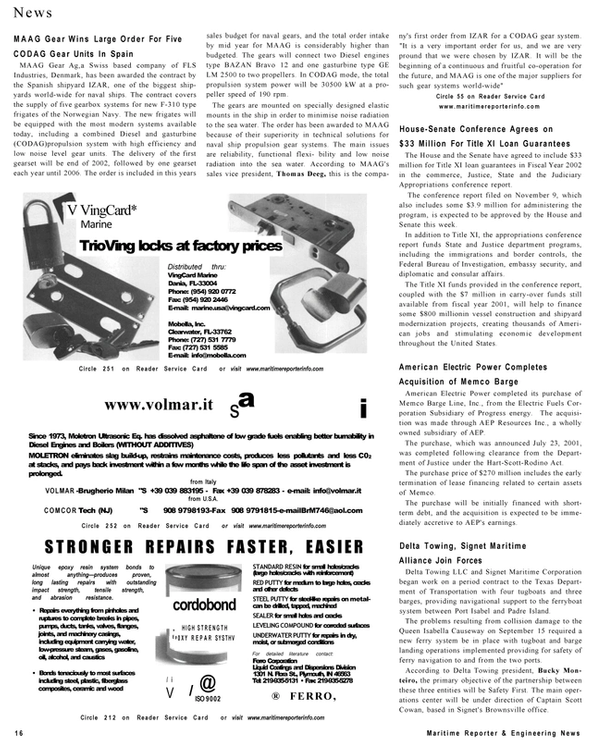