Following the completion of the e x c h a n g e o f f e r , N o r t h r o p G r u m m a n will consummate a second- step merger in which all of the remaining Newport News Shipbuilding shareholders will have the same right to elect to receive cash or shares of Northrop Grumman stock as described above.

"We are very pleased with our strategic acquisition of Newport News," said Kent Kresa, Northrop Grumman chairman and CEO. "With Newport News, we are creating a $4 billion world-class, fully capable shipbuilding enterprise with expertise in every class of nuclear and non-nuclear naval vessel. Newport News' long and distinguished history and reputation for innovation and excellence in shipbuilding are highly regarded worldwide." "Northrop Grumman is an outstanding corporation and this merger will enhance the future of Newport News Shipbuilding, its employees and our ability to serve our primary customer, the U.S. Navy," said William Fricks, Newport News chairman and CEO. Following the close of the transaction, Newport News will initially be operated as a Northrop Grumman sector. Longer term, Northrop Grumman plans to combine its two shipbuilding businesses into one operating sector. Thomas Schievelbein, currently Newport News' executive vice president and COO, will become president of the Newport News operating sector. He will also serve on Northrop Grumman's corporate policy council. Fricks has announced his intention to retire once the transaction has been finalized. The acquisition is valued at approximately $2.6 billion, which includes the assumption of approximately $500 million of NNS debt. The exchange offer, subject to the tendering of a majority of the outstanding NNS shares, was expected to close by the end of November. 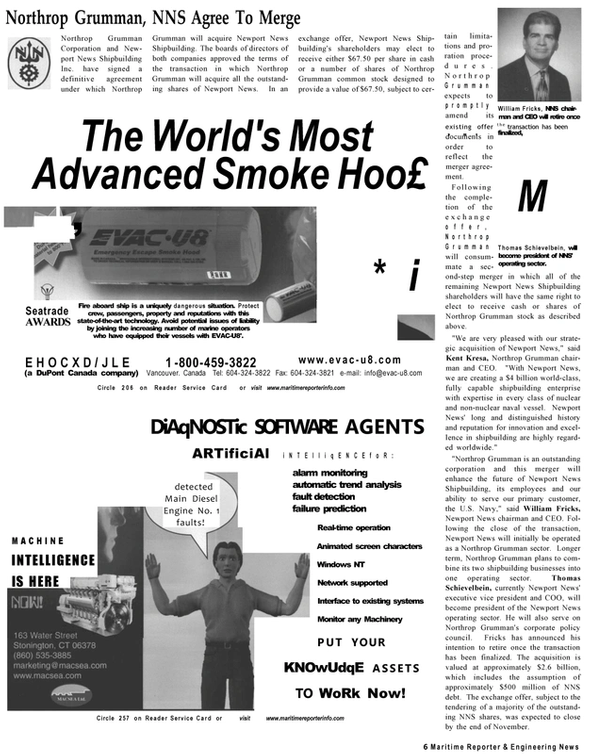