"Seacor Eagle is typical of the flexibility and versatility of our 145 ft. supply/ utility boat to meet the needs of a variety of operators of large, medium and small fleets," said Walter Berry, executive vice president and COO of Bollinger. "The fact that it meets and exceeds new regulatory requirements and is full ABS 100 gt and less than 500 gt makes this design more attractive and profitable for any operator." Powered by two Cummins KTA- 38MO diesel engines, which develop a total of 1,500 bhp at 1,600 rpm, the engines drive a pair of Bollinger 72 x 57-in. stainless steel propellers through Twin Disc MG5301 reverse/reduction gears. Steering is provided by a Jastram steering system and anchors are handled by a Coastal Marine Equipment system.

van Gelder-Wolff, wife of R. van Gelder, chairman of the board of Management of Royal Boskalis Westminster nv, will perform the inauguration and launch of the Coastway.

The Coastway, with its shallow draught and large loading capacity, has been designed to carry out on and foreshore beach replenishment, dredging and maintenance work in shallow water, which generally involves silt, sand, gravel and soft clay. Its jetwater installation allows for dredging of densely packed material. The Coastway is also prepared for the desalination of sand from sea. The adjustable dredge pump speed by a special type gearbox provides the control of the mixture speed and power.

Boskalis will deploy the Coastway primarily for dredging operations on short and medium-range distances.

The Coastway, ordered by Boskalis in December 2000, will be complete at the yard for commissioning and will be put to service by March 2002. 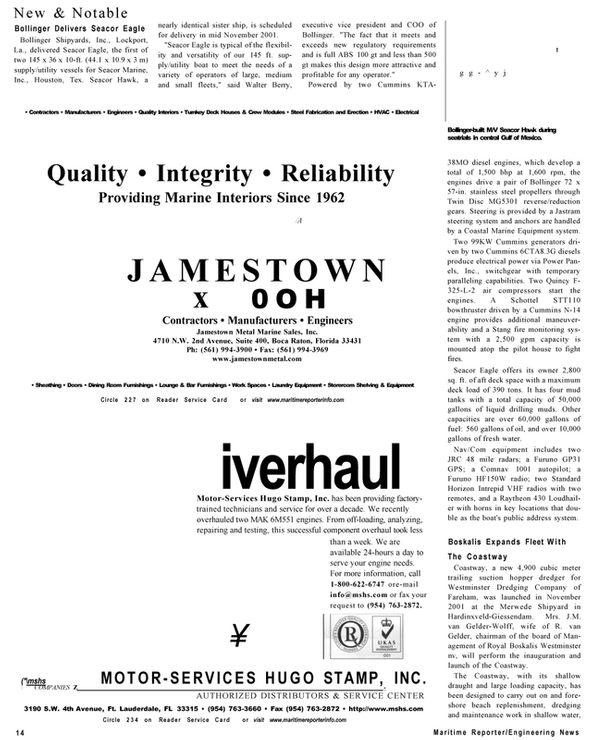