The horrific attacks on 9-11. and the subsequent increase in maritime security required to protect against asymmetric maritime attacks, has dramatically changed the U. S. Coast Guard. They have changed the service's emphasis on port security as well as its ethos in the eyes of the nation it serves. Previously, the Coast Guard received national media attention mostly when it was involved in a dramatic at-sea rescue leaving a public perception of the service as lifesavers.

Since 9-11, because of its port security efforts and its overall role in Homeland Security, the Coast Guard has received more national level public, political and media attention than at any other time in its long history and its public image is rapidly shifting from lifesaver to protector.

The President has made several nationally televised addresses on Homeland Security from Coast Guard bases, a recognition and experience new to all who currently serve in the Coast Guard.

During the recent Fleet Week activities in New York City CNN's Headline News replayed images of Coast Guard small boats operating within the harbor providing a visible presence in one of America's busiest ports. National and local media everywhere have continuously filmed and reported on the Coast Guard's increased presence in the ports and waterways of the U.S.

All of this attention has left some, including some within the Coast Guard, with the impression that port security is a new role for the Coast Guard; it is not.

The Coast Guard has been responsible for the security of America's ports and waterways for nearly 87 years. Port security is a Coast Guard legacy mission that has been continuously performed to varying degrees, but always moves to the forefront of the service's activities whenever the homeland is being threatened.

As we face this newest threat to our internal security, it is useful to examine the history of the Coast Guard in port security to better understand the service's roles, responsibilities and authorities for protecting the U.S.

The origins of the Coast Guard's role in port security date back to 1917 and the enactment of the Espionage Act following the highly destructive sabotage of a munitions terminal at Black Tom Island, NJ. Since that time, a progression of laws, including the Magnuson Act of 1950, the Ports and Waterways Safety Act (PWSA) of 1972 and most recently the Maritime Transportation Act (MTSA) of 2002 have assigned and refined the Coast Guard's roles and responsibilities for the safety and security of our ports and waterways. Each new law was implemented in response to very real threats posed to U.S. ports during both World Wars, the Korean War, the Cold War, and now the global war on terrorism. The goal of these laws was to give the Coast Guard the authorities it needed to ensure our maritime security, essential to ensuring our economic survival. ' The Espionage Act was the result of one of the first foreign terrorist attacks ever conducted inside the territorial United States. This spotlight event, which ignited public interest in port security, occurred on July 29th of 1916 on Black Tom Island near Jersey City. NJ at a site now occupied by Liberty Island. Black Tom Island was used to store military ammunition and various explosives. The United States, although providing aid to England, was not at war and the facility had little in the way of physical security and few guards.

The German government knew the facility was exposed and exploited the lax security to prevent the munitions from reaching its enemies. The result was one of the most spectacular explosions ever within a U.S. port. Fortunately, the number of people killed by this incident was minimal, but there was loss of life and significant physical destruction creating a public outcry.

The media picked up the cry and Congress responded by passing the Espionage Act. The Espionage Act of 1917 resulted in the Coast Guard being granted the authority to regulate the anchorage and movement of any vessel in U.S. territorial waters including the placement of guards on or taking full possession of such vessels. The Coast Guard, with this new authority, designated selected officers as Captains of the Port or COTPs, with direct tasking to ensure the requirements from the new law were properly enforced. This COTP designation has been a primary foundation from which the modern port security mission has evolved.

- Although the rigid enforcement of this act waned following the conclusion of the First World War, the authorities and the emphasis on port security ramped up exponentially as the United States entered World War II. Again, the media captured the country's interest with pictures of the damage inflicted by German submarines operating off of the Atlantic Coast sinking ships in plain view of residents along the New York shore. During World War II the Coast Guard was deeply involved in port security missions that supported the onload of supply ships headed for both theaters of operation. These operations were most recently duplicated as the Coast Guard supported Military On-load Operations in strategic ports supporting Operations Enduring and Iraqi Freedom.

It was during World War II that Congress specifically reinforced the role of the COTP as the lead for enforcement activities within their specific ports. This occurred in 1941 while the Coast Guard was being transferred to the War Department specifically under the Navy.

Following the end of World War II and the reduction in force, the Coast Guard again returned to the traditional mission mix. At the same time that this was occurring the political landscape of the world was continuing to change with the rise in power of communism in several locations. With the United States entry into the Korean conflict. Congress again looked at the ports as being a potential critical vulnerability and responded by reinforcing the authorities under the Espionage Act by enacting the Magnuson Act. The act expanded the Coast Guard's authorities beyond the limited scope of the Espionage Act to include protection of vessels, harbors, ports and waterfront facilities in the U.S.

From this law spawned the COTP's authority to establish and enforce security zones. After the Korean War ended and throughout the Cold War emphasis on port security remained, but not as a top priority within the Coast Guard, as new missions were added with little growth in personnel or funds. Instead, port safety became increasingly important to COTPs as they sought to ensure the safe operation of commercial vessels and facilities. Still, port security operations continued, primarily as a mission for the Coast Guard Reserve in support of military out loads.

Following 9-11, the Coast Guard responded immediately deploying its fleet of small boats and cutters to protect the nation's ports and waterways from acts of terrorism; once again port security became a top priority for the service.

Congress also acted quickly in support of the Coast Guard, passing the Maritime Transportation Security Act of 2002 (MTSA). This massive 592-page bill expanded and reinforced the Coast Guard's authority, responsibility and leadership role for port security. It may be viewed as the final maturation of the Coast Guard's port security authorities into one comprehensive and overarching mosaic. The MTSA also solidified the responsibility that waterfront facility and vessel owners and operators have for their own security.

The act, which comes into full effect on July 1st 2004, gives the COTP clear authority to enforce requirements for vessels and waterfront facilities that have the potential for a "transportation security incident" (i.e., a significant loss of life, economic loss of environmental impact) to develop and implement security plans. The act further designates the COTP as the Federal Maritime Security Coordinator or FMSC responsible for forming a committee of port security stakeholders (Federal, state, local and industry) to develop, implement and exercise maritime security plans for their respective zones.

The result of MTSA has been a partnership that has created a formidable layered defense within the 47 COTP zones in the United States. The first layer is the internal security mandated by law and implemented by facilities and vessels. Local law enforcement and the Coast Guard provide the next layer conducting water and shore side patrols in the ports and waterways. The layers then expand outward as the Coast Guard, Navy and other Federal agencies [...] 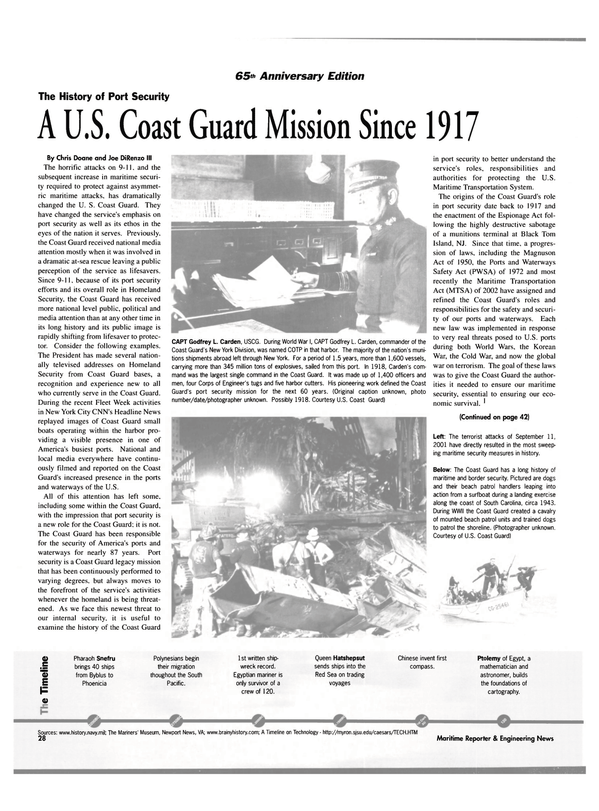