The Tugboat, Towboat and Barge Industry

This year. The American Waterways Operators (AWO), the national trade association for the tugboat, towboat and barge industry, celebrates its 60th anniversary. AWO members, representing the inland, coastal and harbor sectors of the industry, recently marked this milestone at its Spring Convention, recalling the reasons for the association's founding and recognizing the remarkable evolution of the industry over the past six decades. AWO was formed in 1944 in the midst of emerging regulations, priorities and demands for transportation during World War II.

Today, AWO members account for 80 percent of the towing industry's active fleet. The industry has met, and continues to meet, many challenges, notably in the areas of safety, security, Jones Act integrity, infrastructure modernization, oil spill prevention, and state vs. federal regulatory jurisdiction.

Safety - The Biggest Challenge Safety has without a doubt been the biggest challenge in the industry over the past 60 years, and enormous changes have been instituted to enable it to boast of a strong safety record today. In fact, in the context of the amount of cargo carried, waterways transportation is remarkably safe, with a low incidence of both crew fatalities and vessel casualties, defined as incidents involving allisions, breakaways, equipment failure, collisions, fire, loss of electrical power, groundings, etc. That said, safety is an ongoing challenge, and one that consumes both time and resources within AWO as a major focus. In this regard, AWO members have initiated some historic changes to raise the bar of safety for the entire industry.

For example, the establishment of the U.S. Coast Guard-AWO Safety Partnership in 1995 was a first-of-itskind public-private partnership in the U.S. maritime industry. The Partnership has launched over 30 Quality Action Teams to address the most pressing safety issues in the industry and to improve safety and training throughout the tug and barge industry's operations.

The development and adoption of the AWO Responsible Carrier Program (RCP) was a ground-breaking effort to enhance safety in the tug and barge industry. When a tragic accident in 1993 involving a barge that hit and displaced an Amtrak train trestle resulted in the loss of 47 lives, the industry responded with the RCP. a safety and environmental protection code of practice. The Program encompasses every aspect of fleet operations, including company management and administration, vessel equipment and inspection, and personnel training. In 1999, AWO members voted to make compliance with the RCP a condition of membership in AWO. On January 1, 2000, 13 companies were forced to leave the organization when they failed to certify compliance by the deadline. Since then, some of those companies have been reinstated. Today, all AWO member companies must certify compliance with the RCP through an independent, third-party audit conducted every three years. AWO was the first transportation trade association to require compliance with a safety management system as a condition of membership.

The RCP is a dynamic program that continues to evolve to meet the safety needs of AWO members.

Safety — Taking it to the Next Level A new industry safety initiative is now taking shape as the result of a recognition by AWO that it was time to take the RCP to another level to further enhance safety. This new program has also evolved over the past few years as a result of both external events and internal debate in AWO.

In September 2000, as part of the m/v Anne Holly accident investigation, the National Transportation Safety Board (NTSB) recommended that the Coast Guard seek authority to require domestic towing companies to develop and implement a safety management system.

In September 2001, a towing vessel on the Gulf Intracoastal Waterway struck the Queen Isabella Causeway Bridge in Port Isabel, Texas, resulting in the deaths of eight people. When the U.S.

Supreme Court issued its January 2002 decision in the Chao v. Mallard Bay case, it ruled that the Occupational and Safety Health Administration (OSHA) regulations could apply to uninspected vessels, namely, tugboats and towboats.

Then, in May 2002, another tragic bridge allision involving the Interstate- 40 bridge in Webbers Falls. Oklahoma, resulted in 14 fatalities. Under the auspices of the Coast Guard-AWO Safety Partnership, a task force was formed to examine the causes of barge/bridge allisions and to make recommendations to avert them and reduce the severity of those that do occur. The Coast Guard- AWO Bridge Allision Work Group report was issued in May 2003.

In the context of these events over the past few years, the Coast Guard determined that a new safety and security regime for the towing industry could improve safety, particularly one requiring that towing vessels be subject to inspection and that all towing companies employ a safety management system.

The Secretary of Homeland Security recently submitted just such a proposal to the Congress. AWO supports this proposal, a historic change to its long-time position, because it believes the new inspection regime will enhance industry safety and security.

Security — A New World Speaking of security, the towing industry, like all transportation modes, has had to retool its approach to safety in a post-9/11 world to incorporate security concerns. For the past 60 years, the industry has viewed operational issues and vulnerabilities through the safety prism. Today, of course, that has all changed. The industry has had to consider the possibility that a vessel could be used as a weapon. In this regard, AWO worked closely with the Coast Guard, the U.S. Army Corps of Engineers, and the U.S. Departments of Transportation and Homeland Security to assess vulnerabilities, and to develop a model vessel security plan for members.

With a few modifications, it later became the AWO Alternative Security Program, one of only a handful of alternative industry plans that received Coast Guard approval to meet the requirements of the new maritime security regulations put in place on July 1, 2004.

Further, it stipulated that such vessels be operated by U.S.-citizen controlled companies and crewed by U.S. citizens.

Because of the Jones Act, all providers of domestic transportation services operate on a level playing field - that is, they must all comply with the same laws and regulations pertaining to safety, security taxation and the environment.

For generations, the Jones Act has pro- vided the basis upon which enormous investments have been made by U.S.

The Jones Act has withstood several challenges in the past few years. In 1995. the Jones Act Reform Coalition (JARC) was established to promote the elimination of the Jones Act. In response, the Maritime Cabotage Task Force (MCTF) was formed to bring together vessel operators, shipyards, and labor unions in an effort to defend U.S.

cabotage laws. Despite an aggressive public relations campaign, the JARC failed to achieve a weakening of the Jones Act and the JARC is now disbanded.

The MCTF. of which AWO is a Board member, has worked vigorously to close the loophole by which foreign vessel owners were trying to gain access to the Jones Act trade. Other challenges to the Jones Act continue to exist in international trade negotiations. In a post-9/11 world, the Jones Act seems even more relevant, and with the bipartisan support it has enjoyed from U.S. Presidents and Members of Congress, it is hoped that it will continue to be recognized for its vital importance to U.S. homeland security, economic and environmental interests.

Infrastructure — Maintenance and Modernization Proper maintenance and modernization of U.S. ports and waterways infrastructure is a critical issue for the towing industry and vital to America's economy, environment, and quality of life. Locks and dams that were built in the 1930s have outlived their useful lives and are in many cases crumbling, causing costly delays for the industry and negatively impacting the economy. Since barges carry over 50 percent of America's export grain, inefficiencies caused by poor infrastructure affect America's position as breadbasket to the world and erode American farmers' ability to get their products to market in the most affordable way. The system is aging while demands on it are growing. The U.S. Department of Transportation has projected that demand for waterways transportation will double by 2020, making a world-class ports and waterways infrastructure more important than ever. At the same time, the maintenance and modernization of the system is under attack from well-funded, vocal opponents who oppose these projects - from modernizing the 60-year old locks and dams on the Upper Mississippi River to dredging in coastal ports and harbors, to maintenance of the dams on the Columbia/Snake river system in the Northwest -- and misunderstand the projects' fundamental value to the nation.

Inland towing vessel operators pay more than $100 million a year into the Inland Waterways Trust Fund (IWTF) to pay for 50 percent of all capital construction and major rehabilitation on the inland waterways system. The IWTF currently has a $400 million surplus.

Support for a modern, well-maintained waterways infrastructure is a priority for AWO, which coordinates with other waterways organizations to ensure adequate funding for priority projects identified by the Congressionally-authorized Inland Waterways Users Board.

OPA '90 and Double Hulls The transportation of petroleum and petroleum products is a key segment of the towing business: tank barges move 20 percent of the oil that fuels the economy and keeps cars running and homes warm. Powerful, state-of-the-art tugboats also provide tanker escort services to enable the safe movement of petroleum cargoes in busy ports. In the wake of the Exxon Valdez disaster, Congress enacted the Oil Pollution Act of 1990 (OPA '90), which mandated that all vessels calling at U.S. ports be doublehulled by 2015. Today, fully 73 percent of the U.S. tank barge fleet is doublehulled, years in advance of the OPA '90- mandated phase-out schedule. This has been accomplished through an enormous investment of more than a billion dollars in new double-hulled vessels to serve the U.S. energy transportation market and a commitment by companies in the oil transportation business to embrace safety management systems like the AWO Responsible Carrier Program to reduce operational risks throughout their operations.

Since OPA 90 was passed, oil spills from U.S. tank barges have declined to historic lows. Between 1990 and 2003, barges spilled 93.9 percent less oil - not a perfect record, but a powerful trend in the right direction. The industry's goal is zero spills and a 100 percent doublehulled fleet. AWO members are firmly committed to achieving those goals.

Just such a law passed by Washington State in 1994 led to a landmark Supreme Court decision with huge ramifications for industry operations.

The potential proliferation of individual state laws is of concern to towing industry operators because of the burden it places on companies to comply with different requirements in different states - an obvious problem for an industry that consistently crosses state borders as it operates throughout the nation. When Washington State enacted its oil spill prevention law intended to prevent oil spills from tanker accidents in state waters, the International Association of Independent Tanker Owners (INTERTAN KO) filed suit challenging the constitutionality of the law. When the U.S.

Subsequently, the state of Washington repealed the tank barge regulations and suspended its regulations for tank ships.

AWO is committed to containing state efforts to extend over vessel operations laws and regulations that duplicate or conflict with federal requirements.

AWO will continue to press for repeal of regulations that overstep state authority as outlined in the INTERTANKO v. 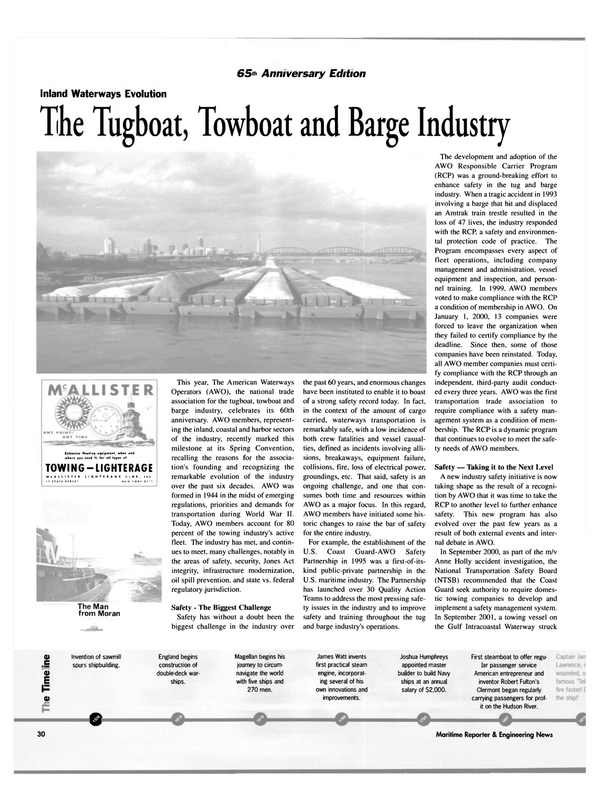