Training and Education in the Maritime Industry

Over the past six decades, there have been rapid developments in technology and marine operations. These have brought about significant changes in maritime education and training.

Six decades ago, maritime education and training was a relatively straightforward process. Upon entry into the merchant marine, an individual served mandatory periods of minimum sea service between progressive grades of license examinations that were conducted by the appropriate licensing authority.

Following a period of sea service, a candidate would enroll in an upgrading course. These courses followed mandatory syllabi designed primarily for professional advancement. A strong element of preparation for the examination was included, but subject knowledge was the focus. External examiners from the licensing authority set and conducted the examinations. Questions were regularly updated and required essay type answers supplemented by sketches and diagrams. In the thorough one-onone oral examination that followed, a candidate was "grilled" extensively and required to demonstrate proficiency for a variety of skills ranging from wire splicing to adjusting a standard magnetic compass.

Coupled with sea experience, these courses covered all of the material required for a particular level of license.

Although there were different types of vessels (dry cargo, passenger, tanker, etc.). their navigation and propulsion technologies were similar. Accordingly, the one-course training system addressed a "generic" ship and the sea time provided on-the-job training for each particular type of ship and the cargo carried.

Paid study leave was a common feature in the industry, so affordable course fees were not a problem. Apart from a First Aid course, there were no "short" courses. The first mandatory short course, a two-week Radar Observer course, didn't appear until 1956.

Although minimum teaching qualifications were required in other professions, the maritime education system considered it unnecessary. Instructors were only required to have the highestlevel license in their particular department.

Largely, teaching was a process of providing information. At that time, the instructor would write notes and laboriously draw diagrams on the chalkboard that the students copied into their workbooks for subsequent reference.

Reprographic equipment was limited to a typewriter and mechanical spirit duplicator.

However, use was made of actual equipment (such as rigging gear, safety equipment, etc.). supplemented by detailed scale models of buoys, flags, and other items. Despite the weaknesses that existed in the system, a generation of seafarers owed much to the dedicated efforts of these instructors.

Rapid advances in technology have led to vessels that are larger, stronger, deeper, faster, and more powerful.

Globalization of the economy has created "just in time" inventory systems that require ships to have quick turn around schedules and smaller crews. The plethora of new technology acronyms (ARPA, GPS, ECDIS, AIS, DP, Azipod, GMDSS, and IBS) reflects the fact that today's bridge is much closer to an aircraft cockpit than the ships of yesteryear.

The same rapid advances have also occurred throughout shipboard operations.

Equipment and procedures for the carriage and transfer of dangerous liquids.

To these add the diversity of human factors and management topics; such as fatigue, stress, sexual harassment, discrimination, crowd control, and public relations. It is apparent that maritime education and training is no longer a straightforward process.

The government's response to the changes in the business environment, and growing public awareness of pollution, has led to the passing of numerous international conventions. These conventions have generally been in response to maritime casualties. Most mandate training and include stiff penalties for failing to comply. The major ones include: SOLAS; MARPOL: ISM: STCW-95; ISPS; and MTSA.

The bigger ships, smaller crews, and shorter turn-around time, leave little time for on-board instruction. This makes it extremely difficult for new mariners to obtain the same practical training at sea. Gone are the days when one can "learn it all" on the job.

The mariner wishing to progress through the license structure is now faced with what must seem a bewildering, complicated process. Even the most conscientious mariner would find it nearly impossible to keep abreast of these changes.

For a mariner that is unsupported by a union or employer, the cost of attending several blocks of short courses could run to several thousand dollars. Training now requires more than "chalk-andtalk." Through mandatory train-thetrainer courses, instructors are more aware of factors that improve the learning process.

Six decades ago, it would have been unimaginable to conceive the plethora of teaching aids now available to instructors and students (copiers, scanners, computers, presentation software, projectors, videos, the Internet, etc.). To these, add state-of-the art full-mission and part task simulators and one can truly appreciate that training tools, as well as the high cost of training, have changed considerably.

These changes have brought about new challenges to maritime education and training providers. By far the greatest of these are compromises made between course length and cost. It is ironic that compared to six decades ago the average course is now one-third the duration, yet covers three times the material.

Constraints of time often lead to teaching the bottom line answers only.

Additionally, the random order in which mariners can attend the block courses do not provide for logical continuity. Of all the recent legislation, the Standards of Training, Certification, and Watchstanding Code (STCW-95) is the only convention that offers a structure to turn this mass of new regulations into a logical methodology for the orderly transfer of knowledge and skills. The code's framework builds on the skill sets identified at each level (Rating Part of a Navigation/Engineer Watch. Officer in Charge of the Watch, and Management level) and how the task of one level fits into the big picture.

It also requires that skill sets be properly assessed before moving on to the next subject (not just cramming for a written examination). This structure is also applicable to the schools and instructors that are providing the train training.

The complete integration of domestic requirements into the STCW Code structure would go a long way towards reducing today's confusing and sometimes conflicting standards. It would also ensure that mariners obtain skills they can actually use in real life.

In addition, it will establish a clear career path for mariners and provide transferable skills. In the long run, it will help reduce the amount of re-training that is required, which will help keep mariners in the industry.

The maritime community, with the help of training institutions, needs to take advantage of this opportunity to harmonize our training system. If all sides work toward the "big picture," we can provide meaningful, quality training that truly prepares mariners for the challenges of the global maritime industry in the 21st century. I have no doubt that the industry and maritime training community are up to the task. 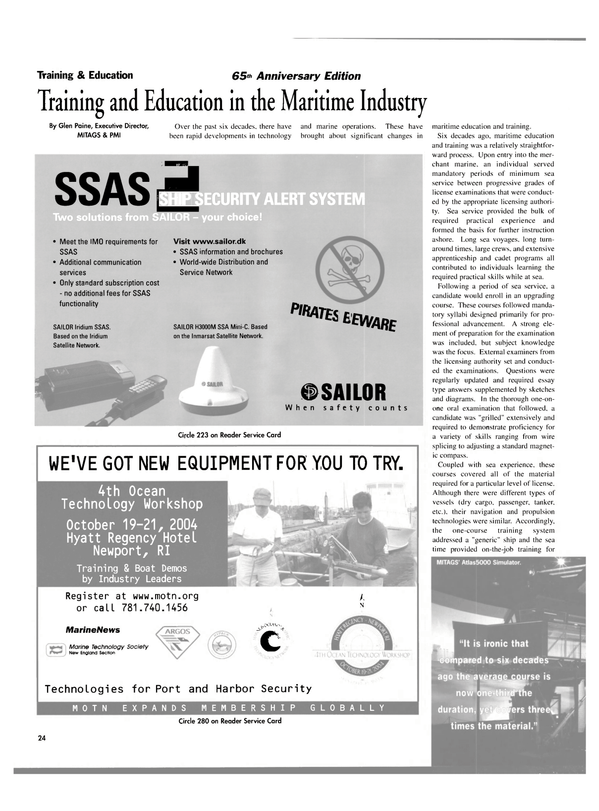 Read Training and Education in the Maritime Industry in Pdf, Flash or Html5 edition of August 2004 Maritime Reporter