France Telecom is pushing hard to advance its position as a single source communications and IT services provider.

Corporate consolidation and technological evolution in the maritime satcom domain continue to subdue pricing, helping to level the playing field among service providers. France Telecom, in an effort to tilt the competitive balance in its favor, is embarked on an aggressive campaign to differentiate itself from the competition by positioning itself as a one-stop communication and an IT solution provider, an effort backed by an impressive R&D effort geared to delivering simple- to-use, customer driven solutions.

"The challenge is to have our range of value added services, to have them known, understood and used," said Ghani Gehloul. Marketing Director, Maritime.

"The big job is the education of the shipowners, to ensure that they realize the benefit." That broad service offering has been significantly expanded already in 2004, with France Telecom Mobile Satellite Communications adding the following since January I: • Version 2 of its Traffic Information System as well as the VPN connection via Fleet; Skyfile C and an extended low tariff time slot for the pre-paid Scratch & Phone Card; • The ability to compress messages by up to 40 Kbit on Fleet 33 (enabling more fluid use of Internet and an increase of 27 percent in e-mail transmission speed) as well as the MPDS on-line management tool with the Fleet range to optimize control of MPDS usage on fleets of ships; • SSAS on Inmarsat C and Mini-C services, enabling ships to comply with IMO's ISPS regulation for the sending of ship-to-shore alarm signals in case of a security alert or attack.

• MPDS with Fleet 33, and the successful testing of call waiting with the MPDS fleet range.

A burgeoning marketplace The proliferation of communication choices available onboard ships has mushroomed much in the same manner, albeit a bit slower, as found in traditional land applications. For business purposes, voice communication is increasingly giving way to data transmission and e-mail. Gehloul said that the voice/data traffic split is about 70 to 30 percent, but conceded that business data usage is growing rapidly while business voice usage is declining. Much as in any office application, speed and reliability concerns are great, as slow communications - whether it voice, data or e-mail — means decreased efficiency and increased airtime usage. While satcom usage becomes more common, shipowners and managers - notoriously fanatical to control costs — are determined to monitor and control costs closely. Thus each of the major service providers have continued to roll out more and increasingly sophisticated value-added software solutions, more often then not offered for free, that are geared toward monitoring and managing satcom services, as well as consolidating information for more rapid transmission.

"A big fear of shipowners is the use of MPDS," said Gehloul. Thus, the onus is squarely on service providers to deliver increasingly sophisticated but simple- to-use platforms to make communication services and costs reliable. "Our strategy is to extend product and value added services, while we always try to give value added services for free," said Gehloul. "All product developments come from our customers." One such free service was the recently updated Skyfile C, a file compression tool which Gehloul stressed is extremely easy to use.

France Telecom makes a move In just five years France Telcom has risen from being the seventh largest provider of communication services to number four, according to Gehloul.

France Telecom Mobile Satellite Communications, with sales of El79 million and more than 100,000 subscribers worldwide, plans to leverage the efforts of its 4,000-strong R&D team to continually develop and deliver communication and IT solutions based on its customer's demands. In the increasingly congested maritime communications market, France Telecom is hardly a stranger, but it is perhaps only the last six years that the company has aggressively sought to raise its level of services and profile. A founding member of the original Inmarsat consortium, France Telecom has been involved in maritime communications since World War II when it began operating a network of radio communications. The company is counting on its customer-driven, 4,000-strong R&D team to deliver to market the comprehensive, easy-to-use software solutions, but the continuing corporate trend of outsourcing vital IT services instead of maintaining large in-house, expensive to maintain teams.

"Many of our shipping customers have huge IT teams (that are expensive to maintain)," said Gehloul. "They should be looking to outsource IT solutions, and we are a communication and IT partner that can solve virtually any problem." Top priority in the R&D lab today is work on video compression technology. While he admits that, currently, the maritime market does not exhibit an overwhelming need for this technology, Gehloul said France Telecom is in talks with the French Navy regarding video conferencing capabilities. 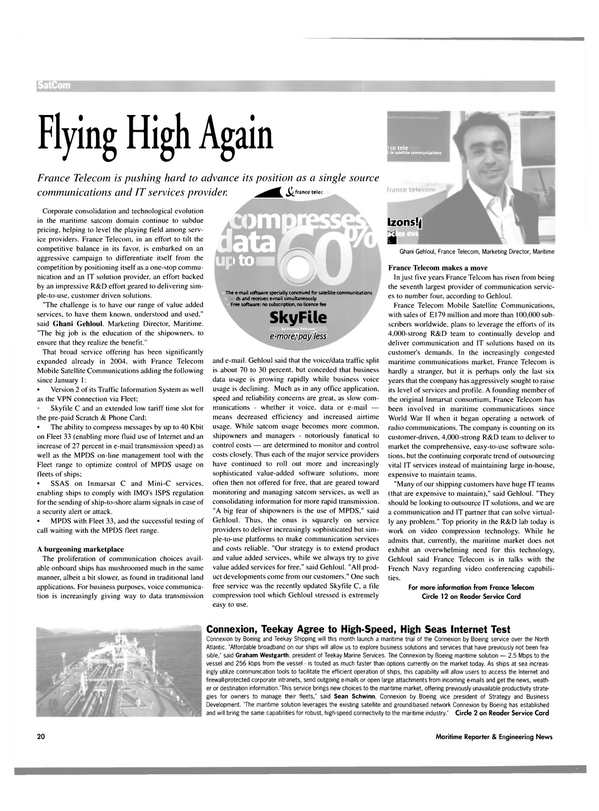