Like most other tasks involving two or more parties, maritime security becomes less difficult if each party understands what the others are going to be doing. The method for achieving this understanding in the marine sector, under both the International Ship and Port Facility Security (ISPS) Code and the U.S. Maritime Transportation Security Act (MTSA). is by means of the Declaration of Security.

Declaration of Security (DoS) is defined by the Safety of Life at Sea (SOLAS) Convention as "an agreement reached between a ship and either a port facility or another ship with which it interfaces, specifying the security measures each will implement".

Coast Guard are more specific and provide that Declaration of Security (DoS) means: An agreement executed between the responsible Vessel and Facility Security Officer, or between Vessel Security Officers in the case of a vessel-to-vessel activity, that provides a means for ensuring that all shared security concerns are properly addressed and security will remain in place throughout the time a vessel is moored to the facility or for the duration of the vesselto- vessel activity, respectively.

DoS form Review of the form recommended in the ISPS Code for documenting the DoS between a ship and a port facility reveals that, after identifying the ship and port facility involved, it provides for: (I) the period of validity of the DoS: (2) the activities covered by the DoS (i.e., mooring, loading or discharging cargo, bunkering, etc.); (3) the security levels of the ship and port facility; and (4) the affixing of the initials of the ship security officer and the port facility security officer for a variety of specific activities indicating that each agrees that the relevant activity will be done in accordance with its security plan. Among the specific activities addressed on the DoS form are monitoring restricted areas to ensure that only authorized personnel have access; handling of cargo; delivery of ship's stores; handling of unaccompanied baggage; controlling the embarkation of persons and their effects; and ensuring that security communication is readily available between the ship and the port facility. U.S. Coast Guard maritime security regulations provide that the DoS for U.S. ships and port facilities must include at least the information provided for in the ISPS Code recommended form.

Utilization of the DoS Use of the DoS may either be mandated by a Contracting Government or requested by a ship.

The port facility owner or operator must ensure that, in the event of a change in the MARSEC level, any ships moored at the facility and any ships scheduled to arrive within 96 hours are promptly notified of the change and that the DoSs are revised as necessary.

Denial of entry into port or expulsion from port may only be imposed where the port state control officials have clear grounds to believe that the ship poses an immediate threat to the security or safety of persons, or of ships or other property and there are no other appropriate means for removing that threat.

Summary Proper use of the DoS is important, not only as a means of coordinating security arrangements between ships and port facilities, but also as a method of documenting appropriate implementation of the ISPS Code and related maritime security requirements. This becomes crucial when a ship calls at a port facility that is not in full compliance with the ISPS Code and does not have an approved security plan. A ship calling at such a port facility must not only institute additional security measures (as provided for in the ISPS Code and its ship security plan), but it must also be able to demonstrate to port state control officials at subsequent port calls that it took the appropriate steps. The way to demonstrate this full compliance with the ISPS Code is to complete and retain on board a DoS fully documenting the ship's security measures while at this non-compliant port facility.

Welcome to the new world of security through paperwork. 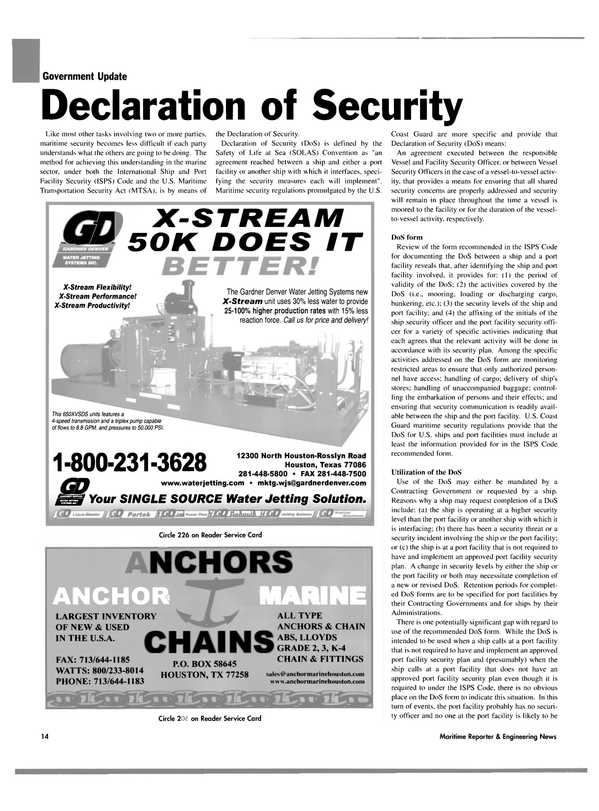