From 2D CAD to the Integrated Product Model

One of the most important improvements in ship production has been the introduction of CAD/CAM. The initial use of computers for drafting, lofting and automation of steel cutting has been extended from the design office and the mold loft throughout the shipyard and beyond by integrating the Internet, sophisticated database applications and enterprise management software to radically improve the entire shipbuilding process. However, the result of this, the Integrated Ship Product Model, is poised to revolutionize ship management and maintenance throughout its lifecycle.

The Problem With Ships Boats and ships differ from most other objects because they are formed of arbitrary curved surfaces instead of welldefined assemblies of geometric shapes.

Manufacturing and hydrodynamics also requires that these shapes be "fair", smooth and free from any sudden changes in curvature. Traditionally, ships were designed using orthographic drafting and wooden splines and weights. Surface contours drawn in var- ious views were laboriously resolved to redrawn, refaired develop a consistent surface. Then structure, machinery and other components were designed, and flotation, weight, structural and hydrodynamic calculations were done.

However, due to the large change in scale, the design drawings were not accurate enough to actually make parts that fit, so "laying down and picking up" was required. The hull surface was and laboriously resolved view to view at full scale, usually on a whitewashed floor in a loft, hence the term "lofting". Loftsmen developed patterns for piece parts and rolled and curved plates and made full size templates to hand cut and form parts. All of this represented a great deal of labor and schedule time.

Ships are also very complicated objects. They contain miles of pipe and wire, ductwork, furnishings, large specialized machinery and perhaps even weapons systems. Virtually all engineering disciplines are involved in ship design. Even a small tug has piping for fuel oil, lube oil, seawater cooling, bilge water, oil contaminated bilge water, engine exhaust, fresh water, sewage, compressed air, hydraulics, and carbon dioxide and seawater for fire fighting. It also has ventilation ducting, AC and DC electrical systems, two locomotives worth of engines, gears and shafting and a small apartment/office/shop complex for the crew. A naval combatant is probably the most complex product ever manufactured: The drawings for a nuclear submarine weigh more than the vessel itself. Coordinating all of these parts so that a ship can be outfitted on schedule in very tight, oddly shaped spaces is a major challenge.

The computer first revolutionized the surface design lofting, and cutting processes. In 1962 the first computer programs were under development to automate this costly effort. By the late 70's several mainframe based large systems, notably STEERBEAR, were available that developed information for surface definition, piece part design and development of code to automatically drive Computer Numerically Controlled (CNC) torches that cut steel. Some of this software also included features to do various analyses, especially stability.

The larger shipyards rapidly adopted these integrated systems throughout the 70s.

One typical such interfaced process was used at Munson Manufacturing of Edmonds, Wash., a builder of small aluminum workboats. In 1991, Munson used Baseline, for preliminary hull surface definition. The files were then transferred to ShipCAM, for detailed fairing, definition of developable surfaces, plate expansions and other lofting functions. This data was then transferred to AutoCAD for part detailing in 2D and to GHS for stability and flotation analysis. Structural, weight and mechanical analyses were performed with spreadsheets. Files of the parts nested together on a "burn sheet" were transferred by modem to Farwest Steel, for cutting. Shortly after, a truck with the CNC plasma cut parts arrived, ready to be erected. As a result, delivery times and labor costs were reduced.

The next challenge was to change shipyard practices to best take advantage of the new tools. The Coast Guard Yard, in Curtis Bay, Md.. was a typical example of reengineering shipbuilding processes to take advantage of CAD/CAM. The Yard also used Albacore Research, Ltd.'s ShipCAM. It had been some years since their last new construction project, when they were awarded a run of 27 49BUSLs (small buoy tenders). The Yard was also the first federal organization to be ISO 9001 certified. Thus, when the Yard implemented a production CAD/CAM system it was systematically integrated into the production process, through the use of Total Quality Management techniques, looking for changes and streamlining processes. This proved to be another important advance, though one enabled by technology, rather than an advance in technology itself.

The lesson from this is that CAD/CAM in particular and computers in general afford significant opportunities for improvement, and the wider one looks for improvements, the more opportunities. The precision offered by CAD/CAM has been especially important in modular construction, because it' the parts are exactly defined and guaranteed to fit, they can be made anywhere and outfitted ahead of time. Other opportunities include concurrent engineering, palletization and group technology.

improved techniques for controlling and scheduling work and better 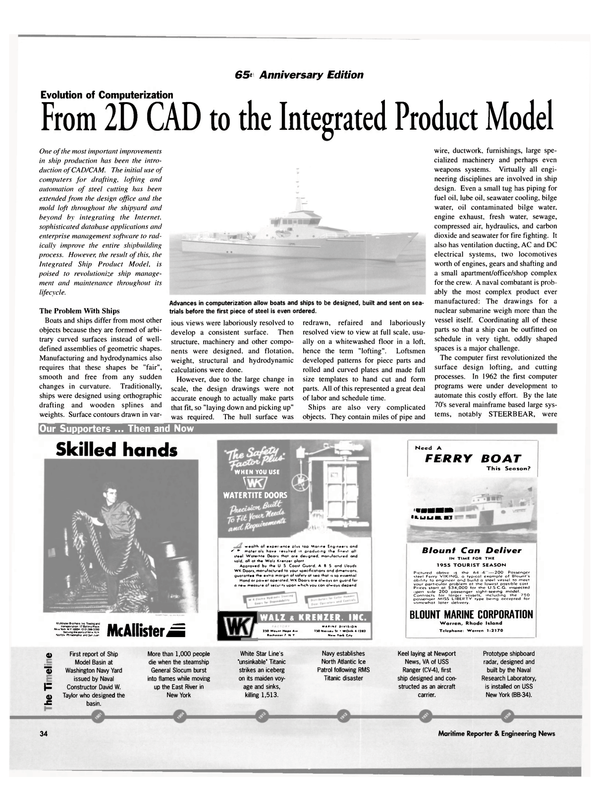 Read From 2D CAD to the Integrated Product Model in Pdf, Flash or Html5 edition of August 2004 Maritime Reporter