As I watch the back and forth in Washington – and beyond – on the issue of whether to allow the export of crude oil and LNG, I can only shake my head and wonder why it is even a topic for discussion anymore. I honestly cannot think of a single reason why we shouldn’t. Our European and Asian readers are probably laughing as I discuss the merits of changing a domestic policy that is clearly a remnant from a bygone era. Here at home, though, it’s not really a laughing matter, is it?

National & World Security
For more than four decades, the biggest threat to American security was energy – or rather the lack of enough domestic supplies and the use of energy (by others, principally OPEC) as a geopolitical weapon. Those days, at least for North Americans, are long gone. The shale boom is upon us. Offshore, deepwater exploration is once again robust and more acreage is being brought into play. At least one major classification society, an oil major and many, many other so-called ‘experts’ tell us that America can be energy self-sufficient by the year 2020. Indeed, we’re already almost there. That doesn’t mean that the use of energy as a weapon has gone away. It hasn’t. In case you weren’t paying attention – and I am – Mr. Putin and Russia are using it to hold the Ukraine and Europe itself hostage. “Respond to my aggression,” he all-but-says, “And we’ll cut you off.” Thankfully, the EU is responding. So, should we. And, still we wait. And debate.
How refreshing would it be for North America to be able to dictate the terms of the coming world order, for all the right reasons? From my seat, I don’t think Russia can sustain what it trying to accomplish, but only if ‘energy’ is taken off the table.

Prosperity & the Economy
It’s no longer undeniable. Energy (specifically, domestic energy) will be the lynchpin of the health of the U.S. economy: today, tomorrow, and for a long time to come. Pipelines, refining, exploration, the waterfront, railroads, technology and a hundred other sectors – they all come into play. It doesn’t all have to be oil, but oil and gas will be the bridge to the future of sustainable energy. We can’t get there without it. Even the most diehard environmentalist protester got to work today in an automobile, bus or train – burning fossil fuel. Those that didn’t plugged their electric conveyance into the grid which, of course, downstream, probably produced that electricity with oil or gas. Even coal has a future. That’s what scrubbers are for.
Energy and the innovative technology that brings that energy to market in a responsible fashion is what will also fuel this economy going forward. Energy also creates jobs; so much so that we can’t fill the competency gaps that are emerging as senior oil & gas workers begin to retire. Energy also produces badly needed tax dollars. At some point, we’re actually going to have to pay for all these domestic social initiatives. Energy will get us to the Promised Land.
Energy independence and crude oil exports also come with the added attraction of a marked reduction in our foreign trade deficit. And since energy makes up a large portion of that deficit, there is much to be gained by taking a new export policy out for a test drive. We’re already a net exporter of refined products. Did you know that?

The Maritime Component
It’s no secret that exporting U.S. crude oil and natural gas won’t create jobs for the blue water sector of our merchant marine. Those liftings will be accomplished by registered, foreign flag tonnage. Before that can happen, however, the oil has to make it to that blue water port. Some of that, of course comes via rail and in certain places, pipelines can do the job. That said; the inland barge sector will also play a big role. That’s because rail is already stretched to its limit and the complaints by Midwest farmers unable to get their grain to market because of all of the shale oil leaving the Dakotas via train is ample testament to that. Our brown water merchant fleet makes up virtually 99 percent of domestic tonnage. I like to bandy that statistic around, but it is also undeniably true. And if there is one sector that could respond to increased internal transport demands, then this would be it. That translates into jobs; afloat and ashore.

The Environment
One of the primary arguments against expanding our transport options for crude oil is the worry that the risk of pollution would increase. And yet, that’s hardly the case. A recent compilation of pollution statistics assembled by Dagmar Etkin PhD for MarineNews magazine shows that the amount of oil being released by marine vessels into U.S. waters has dramatically dropped. Etkin adds, “The probability of tank vessel spills should be correlated with the amount of oil transported. Since the early 1980s, there has been a nearly 50% reduction in the volume of oil transported annually by tank vessels. But, this does not explain the reduction in spillage. There has actually been a 94% reduction in the amount of tank vessel spillage per oil transported in the US over the last three decades.”
When and if the export of crude oil is allowed, and if shippers take advantage of America’s Marine Highways to make that happen, it will be done in an environmentally correct fashion. The numbers simply do not lie. And, since the environmental footprint of shipping via barge (as measured by ton miles travelled per gallon of fuel) far outpaces its modal cousins, the reduction in air emissions alone by switching to water transport is an added bonus.

Calculating the Bottom Line
I’ve been told that a primary obstacle for not allowing the export of crude oil is the fear that, eventually, the practice will drive up domestic fuel prices for industry and consumers alike. I have a hard time believing that an increase in the amount of feed stocks and crude oils on the open, global markets will do just that. But, let’s assume for argument’s sake that it will. A better question to ask is: what price is too much to pay for economic prosperity, national and global security, higher employment, increased tax revenues and a markedly lower trade deficit? Or, what if we sent abroad a little bit of energy and brought home a few soldiers? I’ll take my chances on lifting the export ban. What about you?
- MarPro 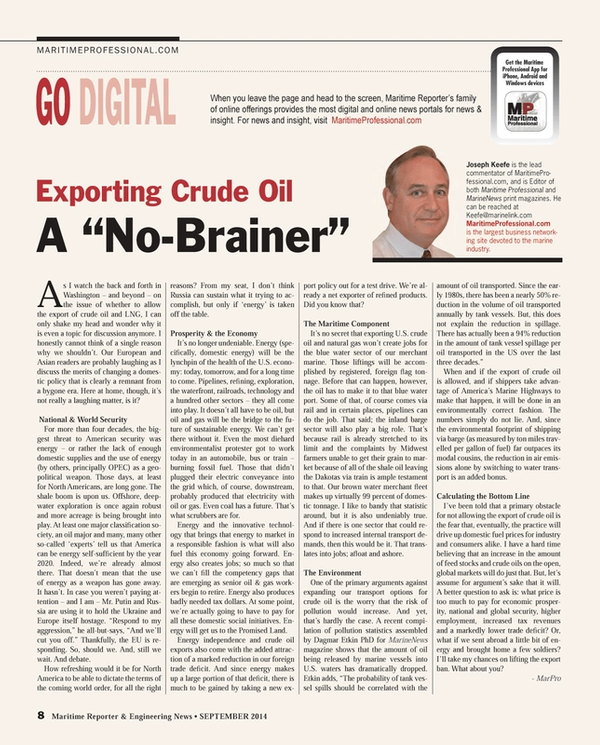