With its staggering ability to show displacements of submillimeter scale to stern waves of several meters high, the Digital Image Correlation technique has been applied on a  wide range of projects at MARIN. Examples from research programs in controlled conditions and full-scale trials are highlighted.
In some situations conventional sensors cannot be applied. For example, when the sensors alter the hydro-dynamical or structural properties of the object or, when the sensor capabilities are simply too limited. However, Digital Image Correlation can provide a solution. This is a method where the shape and deformation of a three-dimensional surface can be measured using two cameras. Recently, a flexible composite propeller was tested in the Cavitation Tunnel at MARIN. As strain gauges could not be applied, the Digital Image Correlation technique was used. A random pattern was painted on the propeller blades so the deformation could be captured by the cameras. The measured data from the deforming propeller blades under various conditions was used to improve structural models of composite propellers.

LNG Containment System
Full-scale wave impact tests have been conducted on an instrumented LNG containment system panel. Here, a random pattern was also painted on the surface. The duration of the deformations was shorter than 1 millisecond, which meant that the cameras had to acquire images at 15,000 frames per second! These measurements were combined with data from pressure sensors, strain gauges and high-speed videos of the wave impacts. This combined dataset provided valuable insight and a better understanding of wave impact loading and the corresponding structural response of the containment system. For the validation Computational Fluid Dynamics (CFD) software stern wave measurements were performed on a +100 m vessel. A field of 25 m behind the vessel was covered by two cameras to capture the stern wave at different ship speeds. Here, the natural texture of the stern wave was used for the Digital Image Correlation. The measured shapes of the stern wave were compared to the shapes calculated by MARIN’s Parnassos CFD Software. Digital Image Correlation opens up new possibilities for measurement campaigns that previously seemed impossible. MARIN continues to apply this technique within challenging projects. 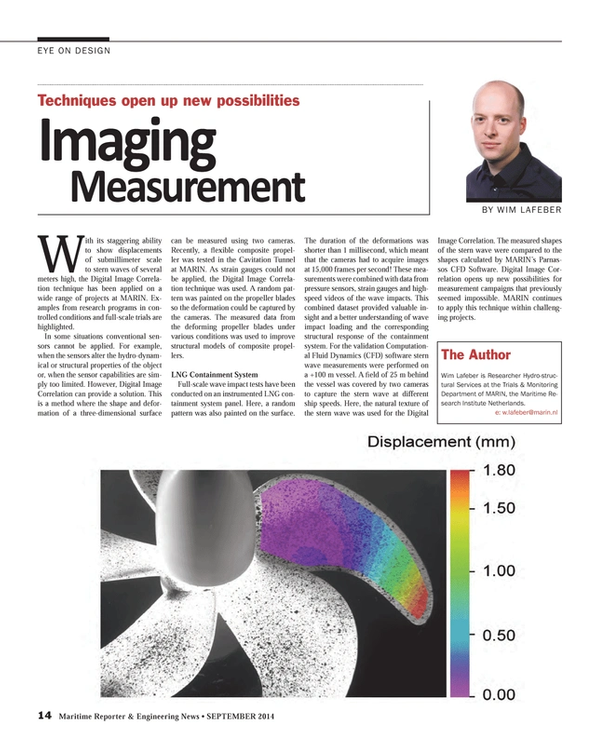