Is the US Prepared to Protect Its Arctic Interests?

The answer to this question is a resounding “no.” The U.S. is not prepared to protect its interests in the Arctic over the next decade. The primary legal regime that is being relied upon by all members of the Arctic fraternity, the Law of the Sea Convention, has not been adopted by the U.S. The operational resources needed to pursue our interests have not been funded and there is currently little prospect that they will be funded in the near future. U.S. interests in the Arctic are vast. They include oil and gas, shipping, environmental concerns, climate change, and the rights and interests of Alaskan native communities. The article describes why we are so unprepared.

A Legal Regime for the Arctic
The U.S. is one of eight member nations of the Arctic Council. The others are Canada, Denmark, Finland, Iceland, Norway, the Russian Federation, and Sweden. Next year, the U.S. takes over as Chair of the Council.  But the Arctic Council is a voluntary organization with few resources to implement or monitor its own guidelines. It has no formal treaty status and no enforcement authority.
The only international framework that presently applies to claims and resolution of conflicts in the Arctic is the Law of the Sea Convention. As then-U.S. Coast Guard Commandant ADM Robert Papp, Jr., testified before the Senate Committee on Foreign Relations at a June 12, 2012 hearing, “[t]he Coast Guard needs the Convention to ensure America’s Arctic future.” Admiral Papp also stated that “[o]f the eight Arctic nations, only the U.S. is not a party to the Convention.”  Further, in testimony before the House Transportation and Infrastructure (“T&I”) Committee on July 23, 2014, Ambassador David Balton, Deputy Assistant Secretary of State for Oceans and Environment, echoed this view, stating, “The United States could significantly advance our national security interests in the Arctic by joining the Law of the Sea Convention. Notwithstanding the strong support of past administrations (both Republican and Democratic), the consistent backing of the military, and the support of all relevant industries and environmental groups, the Convention remains a key piece of unfinished international business for the United States. Further delay serves no purpose and deprives the United States of the significant economic and national security benefits we will gain by becoming a Party to the Convention.”

Why the Law of the Sea Convention?
It is only with ratification of the Convention that the U.S. will have a formal seat on the Commission on the Limits of the Continental Shelf established under the Convention and be able to protect its claims to a vastly extended continental shelf of up to 600 miles containing potentially extensive oil and gas deposits. The Russian Federation has already filed its claim to an expanded continental shelf as have Norway, Denmark and Canada. The U.S. can only observe and protest publically to other nations’ claims with which it may disagree. There is no international forum in which the U.S. can currently bring a legal challenge. With the rapidly deteriorating relations between the U.S. and Russia, it is foolish to think that other members of the Arctic community will stand up to protect U.S. interests with regard to Russian claims in the Arctic when they have their own interests to protect, and when the U.S. has not acted to protect its interests on its own.

Resources for the Arctic
While the State Department has the lead policy role for the Arctic and Secretary of State Kerry will chair the Arctic Council next year, it is the U.S. Coast Guard that has the primary responsibility for patrolling the Arctic and protecting U.S. shipping and maritime interests there. The Coast Guard also has the role of responding to any future oil spills in the Arctic. A number of U.S. companies have expressed interest in drilling in the Arctic, but none have done so to date. The main missions of the Coast Guard in the Arctic are described in its Arctic Strategy of May 2013. http://www.uscg.mil/seniorleadership/DOCS/CG_Arctic_Strategy.pdf.
But, the Coast Guard’s resources are limited by competing missions and declining budgets.  One of the key challenges facing the Congress is whether to fund the Coast Guard to build new icebreakers. Already, the Russian Federation has committed to building a new fleet of nuclear-powered icebreakers.  Yet, Congress has withheld funds for a new Coast Guard icebreaker and some have even called for the Coast Guard to lease an icebreaker from the private sector. The cost to build new polar icebreakers is estimated at $1 billion each, but the long-term cost of not providing this vital platform will be measured in the tens of billions.
The Coast Guard has two heavy polar icebreakers and one medium icebreaker. (The status of these ships is described in detail in a June 5, 2014 report by the Congressional Research Service, entitled “Coast Guard Polar Icebreaker Modernization: Background and Issues for Congress.”)  The heavy icebreakers are the Polar Star and the Polar Sea – both built by Lockheed Shipbuilding of Seattle, WA in the early 1970s. Both ships are now beyond their expected 30-year life. Polar Star, commissioned in 1976, was placed in caretaker status on July 1, 2006, but Congress provided $57M to repair the ship and she was returned to service in the Antarctic last year in support of NSF missions there. Due to an engine failure, the Polar Sea was placed in inactive status in 2011.
Congress is still debating what to do about the Polar Sea. In the Coast Guard and Maritime Transportation Act of 2012 (P.L. 112-213), Congress directed the Coast Guard to conduct a business case analysis of the options for and costs of reactivating the Polar Sea until September 20, 2022. In this year’s Coast Guard bill, the House continues to press the Coast Guard to provide an analysis of the cost effectiveness of acquiring or leasing new icebreaker assets. (H.Rept. 113-384). At the recent House T&I Committee hearing, above, VADM Neffenger stated that the Coast Guard is still studying the issue of the reactivation of the Polar Sea. The Coast Guard has also made clear that there is no room in the existing Coast Guard budget to fund a new icebreaker without cannibalizing other high priority missions.
In the meantime, the House Appropriations Committee deleted $6 million requested by the Coast Guard to continue design work on a new icebreaker because the Coast Guard has carryover funds. At the same time, the Senate Appropriations Subcommittee for the Department of Homeland Security which includes the Coast Guard included the $6 million request and added $8 million to reactivate the Polar Sea. These differences will have to be worked out in any conference at the end of the year. If there is only a Continuing Resolution, no new funds will be provided for this project and the status quo will be maintained.
Another key goal of the Coast Guard and the U.S. in the Arctic is to maintain maritime domain awareness or knowledge of what is happening in the Arctic. This is one of the Coast Guard’s key missions in the Arctic as the lead for this activity in the Administration. The Senate’s Coast Guard authorization bill directs the establishment of an Interagency Arctic Maritime Domain Awareness Committee (Section 206 of S. 2444).  At a recent Senate markup of the defense appropriations bill for FY 2015, $5 million was added to the defense budget for DARPA for Arctic Domain Awareness programs.
The Senate DARPA funding increases raises the valid question, also raised by ADM Papp in talking to reporters following his final State of the Coast Guard address in Washington, DC, on February 27, 2014 – who should pay for the U.S. polar icebreakers?  Papp answered this question by saying “[t]he Coast Guard shouldn’t bear the full brunt of the cost of the icebreaker because it serves the entire country not just the United States Coast Guard” (as reported by USNI News Editor on February 27, 2014).  The capability is needed for defense as well as other purposes and the Coast Guard should not be the only agency whose budget is tapped for this capability.

New Advisors for the Arctic
On July 16, 2014, Secretary of State Kerry named two top officials to advise him on Arctic issues. This may have been partly in response to calls from certain Members of Congress, e.g., Congressman Larsen (D-WA), to have a special envoy to the Arctic. ADM Papp will serve as the first special representative to the Arctic.  Fran Ulmer, who presently leads the U.S. Arctic Research Commission, and was a former Alaskan Lieutenant Governor, will be his special adviser on Arctic science and policy(as reported in Greenwire on July 17, 2014: “ARCTIC: Kerry names 2 top-level advisers for region”).
Both advisers will bring a wealth of knowledge and experience to these issues. They will also be critical to providing policy advice to Secretary Kerry as he gets ready to chair the Arctic Council next year.
We can only hope that, with their leadership and the leadership of key members of Congress, the U.S. will be better prepared to pursue ratification of the Law of the Sea Convention and to provide the resources needed to manage and protect its interests in the Arctic. The Congressional actions noted above are mere band-aids and fail to begin to address substantively the solutions required to address the national interest of the U.S.  The U.S.’ strategic and economic interests in the Arctic are too great for the nation to continue to fail to come to grips with both the legal and operational requirements of protecting those interests, and we will have squandered our opportunity to do so if Congress and the Administration do not act soon.

Joan M. Bondareff is an Of Counsel at Blank Rome. She focuses her practice on marine transportation, environmental, and legislative issues.
e: [email protected]

James Ellis is a retired partner from Blank Rome who specialized in maritime matters. He was the former chief legal counsel for the Coast Guard in Alaska and the former Department of Transportation representative to the Law of the Sea Conference.
[email protected] 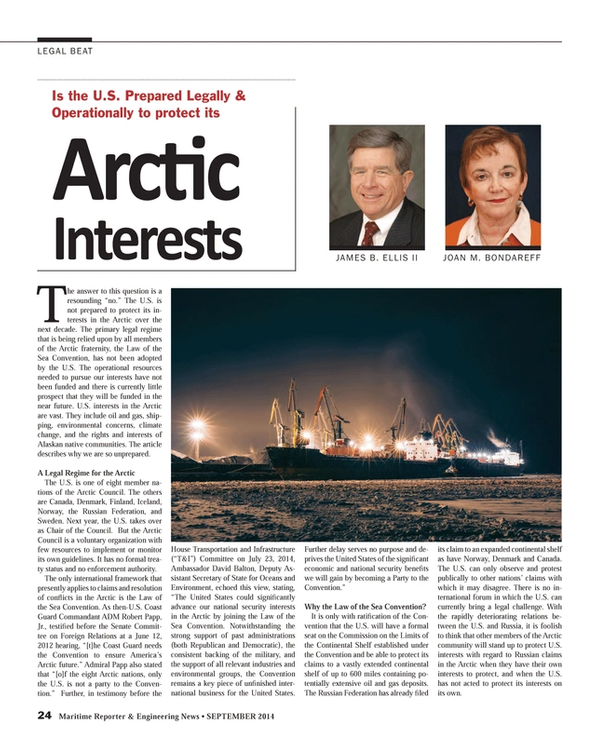 Read Is the US Prepared to Protect Its Arctic Interests? in Pdf, Flash or Html5 edition of September 2014 Maritime Reporter