Caterpillar Motoren is a German-American success story,” were the opening words of Oswald Schöffel, CEO of the Caterpaillar Motoren GmbH, Kiel, Germany, in welcoming guests and select media to the Caterpillar Motoren Kiel facilities earlier this summer for a product presentation of the latest developments in MaK Medium Speed Engines. “The company has grown continually during the recent years and has gained with its innovative products a very good position in the market segments of the shipping industry, stationary power generation as well as in the oil and gas industry. This also applies for and specifically for our sites in Kiel and Rostock, which has, beside others, with construction and delivery of low emission marine engines for the cruise industry earned great respect by shipping owners and passengers.”

Collaboratoin Nears Two Decades
In 1997 Caterpillar Inc., headquartered in Peoria, Illinois, acquired the former Krupp MaK Maschinenbau GmbH, Kiel (MaK) and changed the name into Caterpillar Motoren GmbH. Only two years later the company extended the Kiel site and acquired additional parts of the traditional company Dieselmotorenwerk Rostock (DMR). In the year 2000, after just 12 month of work and improvements of the test stand capacities, the manufacturing of the biggest Caterpillar engine series, MaK M43, has been completely transferred from Kiel to Rostock.
Since then medium speed four-stroke engines in the power range of 6,000 to 16,800 kW are manufactured at the site in Rostock-Warnemünde. To guarantee a long term growth strategy for large diesel and gas engines, the plant has been extended by four halls. Today, the Rostock Engine Center ranks among the most modern manufacturing plants in Europe.
The 22,500 sq. m. plant is responsible for the assembly, testing, painting and delivery of the engine types VM32C, M43C and VM43C as well as the gas engines GCM34, mainly manufactured for the oil market.
“Marine engines out of Kiel and Rostock nowadays are on the high seas all over the world and they reliably perform their function,” said Schöffel. “What has started in 1851 with the very first German sea-going steel steamer at the river Warnow, will be continued by Caterpillar Motoren Rostock GmbH.”

New Developments
It was Dr. Frank Starke, Global Product Manager, Medium Speed Engines, who opened the product presentation with the words: ”For every challenge, there is a suitable solution.” Caterpillar Marine, which includes the MaK marine engine range manufactured at Caterpillar Motoren facilities in Germany, China and Brazil, is responding with a number of new developments, including the M32E engine for diesel-electric drive, the M25E engine and three dual fuel options - the M 46 DF, M 34 DF and M25DF (under construction).
“For each and every challenge you could imagine - whether it’ s gas or dual fuel, marine diesel or heavy fuel engine, maximum power or part load optimized - Cat products will provide a suitable solution,” Starke said.
“We have developed a range of retrofit and after-treatment solutions that apply the latest developments to engines in service, bringing them up to current standards, meeting modern emission levels and cutting running costs.”
For vessel operators, reducing carbon footprint means cutting down on their traditional use of heavy fuel. Starke said: “As engine manufacturers move away from heavy fuel, most of their resources are being put into developing gas and dual fuel alternatives. The benefits of dual fuel are well-known: emissions reduction without after-treatment, fuel costs are all substantially reduced compared with MDO (marine diesel oil), and particulate emissions are down to almost zero, with the bonus of tax breaks for operators in some parts of the world. However, dual fuel options are not necessarily proven for the whole of the marine industry. Smaller vessels have a good reason to convert, but the long-haul operators need to use low-emission fuels only in controlled areas, such as the North Sea and the Baltic, not on the open ocean. There is no single solution that covers the whole world.”
The offshore market is where much of the new technology is directed.
“It is one of the more active markets these days in the marine industry,” said Starke, “So this technology is also fairly relevant to the offshore tug operators; they are involved in the same field of operation.”
It is also a technology that has moved forward considerably in the past five years. Starke explained: “The biggest step we’ve seen in terms of technical development in recent years in engine controls.”
The perception is that a gas engine has a slow response, but that is no longer true, and today’s gas engines are comparable to their diesel counterparts. “We have to work with our customers to overcome the old perception, because our dual fuel engines have evolved so they are very competitive,” Starke said. “And when you think about smaller engines in a more dynamic operating mode - like tugs for example - even medium-speed engines have their challenges in load response.”
Other benefits of the new dual fuel engines are that they will be capable of running on different gas qualities, and CO2 and visible smoke will be substantially reduced, compared with diesel engines.
This is particularly important in tug applications, according to Starke. “Harbor tugs have a problem in that avoiding visible smoke affects how much fuel you can inject and therefore you have a limit in terms of how fast you can speed up the engine. A gas engine doesn’t have that problem because it doesn’t produce smoke as easily. In addition, MaK dual fuel engines can be customized to the client’s operating profile due to modular control systems and flexible mappings.”

Ongoing Developments on Existing Models
Alongside the development of new solutions such as dual fuel and gas engines, existing products are being continually improved and enhanced. Engine upgrade is one sector where the company is forging ahead with a range of new products. Starke explained: ”One of these is the MaK M32E – based on the successful M32C engine design, built for the offshore market.”
The first MaK 5MW engine in the 320mm bore segment, the M32E, shares the same footprint as its predecessor. As well as extending the M32C’s power range to 5MW, the upgrade runs at 720/750 rpm, and features a more compact (and lighter) engine design. A part-load optimization kit is also available for diesel-electric/CPP and generator set application. “Slow steaming optimization is another new option we are introducing,” Starke said. “It allows customers more flexibility in the operating mode while still being as fuel-efficient as we can be in that situation.”
The 720/750 rpm concept will reduce generator costs, and there is a low smoke option that makes it particularly useful for harbor tugs and other vessels working in smoke-restricted zones.
Another upgrade is the M25C/E selective catalytic reduction (SCR) system. According to Starke is the M25 SCR for a pure diesel or HFO (heavy fuel oil) engine, and is an after-treatment system to bring the NOx levels down.
“Depending on which application the customer wants to use to operate his vessel, we would provide the technology which fits his specific case.”
According to Starke, Caterpillar is watching the gas engine market very carefully and has already put its foot into this door. ”You certainly have noticed that we shipped the first Cat 3500 Series marine gas engines from its factory in Lafayette in the U.S., with five of the Cat G3516 marine engines being selected for the world’s first LNG-powered barge, in the Port of Hamburg. This engine is a spark-ignited gas engine designed especially to operate in commercial vessel applications. The solution is compliant with the strict Marine Classification Societies requirements, SOLAS, and is certified by Bureau Veritas. The gas-fuelled barge will be capable of providing up to 7.75MW of electric power. This solution is not only safe and environmentally friendly, but also very economical in regards to the lowest cost of operation.”
But in spite of all those benefits, for a variety of reasons, pure natural gas solutions are not always the best option for some customers with the need to have fuel redundancy built into their vessel design. Caterpillar is carefully taking that into account. For those needs the company now offers the pure gas high-speed spark-ignited solutions, as well the high-speed and medium-speed dual fuel solutions to its marine customers.
Starke said that Caterpillar has been introducing natural gas engines to the marine market ‘from the top down,’ starting with large and medium-sized engines under the MaK brand. While the first M46DF engines have already been shipped, the next smaller bore engine, the MaK 34 DF, which has roughly 3-5MW of electrical power, is undergoing the final tests of a rigorous development programme. The M34DF is a very suitable dual fuel solution, in particular for anchor handlers, where the diesel version, M32C, is already enjoying an outstanding reputation of durability and reliability.
Since 2011 Caterpillar owns also the well-established Mannheim company MWM, founded by Carl Benz in 1871, and became integral part of Caterpillar. Over the past two years, Caterpillar turned the Mannheim location into its global Gas Center of Excellence. Starke said ”If the shipping industry during the next years will change rapidly to natural gas fuel, it might be possible that we are going to marinize the MWM gas engines for the use in vessels.”
Aside from the latest developments on diesel and gas engines, it cannot be ignored that the economical situation for the Kiel engine production plant is not promising. In the beginning of May 2014 a press report shocked the employees of the plant: Caterpillar intends to transfer the production of their big engines to Rostock and Asia. ”With this, the company thus responds to the ongoing weak demand for marine engines and the rising cost pressure,” said Schöffel.
The new strategy provides that the engine series M20C and M25C will be produced in Asia instead in Kiel – to be ”closer to the biggest market for such engines,” said Schöffel. The engines made of Kiel will be installed in vessels on shipyards for owners around the globe.
”The assembly of the larger and more complex engine series will be concentrated at the site in Rostock – this also to maximize the site performance,” said Schöffel.
With that manufacturing of the engine series M32 soon to be shifted completely to Rostock. Caterpillar Motoren Rostock GmbH produces already one type of this engine, additionally the engine type M43 and one gas engine are produced there. For the time being around 100 employees are working here. As announced by the company, Kiel shall be further on the worldwide competence center of the U.S.-concern for marine engines and engines for the oil industry. Also administration, design, engine research and remanufacturing of engines will remain in Kiel. In addition, components for the Rostock engines will be produced in Kiel, and also the foundry (Caterpillar Castings Kile GmbH / CCK) will stay in Kiel. 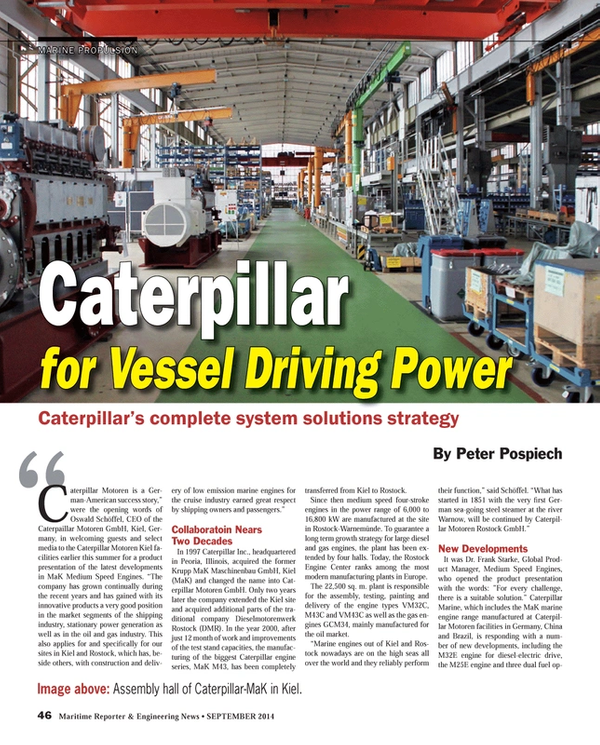