Vice Adm. William Hilarides, the commander of the Naval Sea Systems Command (NAVSEA), recently spoke to a small group of reporters about his vision for NAVSEA and the challenges and opportunities he faces. A decline in the number of skilled Sailors able to conduct repairs onboard their ships; an aging civilian workforce; balancing capability with affordability and achieving commonality are priority issues for Hilarides and his staff.

To reduce the total lifecycle cost of its ships, the Navy eliminated some sea duty positions for Sailors on ships in the late 1990s.  Hilarides says the Navy’s reduction of personnel on ships, their associated training, as well as eliminating subsequent shore assignments where they provided technical support may have saved some money, but had a negative effect in the long run.

“We went through a period where downsized the size of the crews. I would say we probably went a little too far. We took them out of the equation to a great measure, and we have to put them back in.  So we’re putting back into the engineering departments on most of our ships enough people so that the Sailors can learn how to maintain their own ship. That actually makes it more resilient from a war fighting perspective. When you’re in battle, and damage occurs, you want to be able to fix it yourself,” Hilarides says. “We still have to help our Sailors to be able to work on their own ships.”

“What makes chief petty officer a real technical expert is working on the equipment. So we have to re-empower them in that,” he says. “This will help with that maintenance burden, and so lower the cost of an individual availability; make the ship more resilient; and, frankly, it’ll make happier sailors. They join, generally, to learn technical skills and not letting them work on their own equipment is really, in my personal opinion,  denying them what they signed up to be in the Navy for—to learn those hard technical skills.  We have to make sure we fulfill our part of that bargain.”

Hilarides says the Navy has reestablished intermediate maintenance activities inside the regional maintenance centers, and that will provide a path for that second class petty officer who can start taking his equipment apart. “When he goes back to sea as a first class, he’s had more knowledge and expertise.”

“An amphibious ship has 10 fire pumps on board, and it makes a mess when the seals on one of them begin to leak.  20 years ago the repair department would come down, lift the casing, figure out what was wrong, replace bearings and seals, align it, put the casing back on, seal it, test it, and put it back in service on the ship,” says Hilarides.  “Today this job is done by an outside contractor.   So if your sailors learn about that pump, then go ashore and work on that pump, then come back as the chief or the first class of the division, they have a chance to be competent to take on that repair and execute it successfully.”

“To get a new recruit through A school, onto a ship where he or she is actually working on their equipment, then ashore to that IMA to learn more, and then back to a ship as a chief petty officer, that’s 10 or 15 years,” says Hilarides.  “It’s a slow rebuild.” Hilarides says that NAVSEA and the naval shipyards have a senior workforce, with many workers eligible to retire.

“There was a period of almost 10 or 15 years where we really didn’t hire, and it has created a “demographic hump” where we have a lot of people 30 and younger, and 55 and older, a pretty good valley in between,” he says.  “The older workers will retire when they reach that “sweet spot” in their retirement program.  So they’re leaving at a steady, predictable rate.  But when that 55 or 60 year old worker walks out the door, they walk out with 35 years of experience, and somebody with 15 years’ experience has to take their place.  So we need to capture the best practices for modern knowledge management, and accelerate the learning of this person with only 15 years’ experience.”

Hilarides sees both a threat and an opportunity.  “We’re partnering the 35 year olds with 55 year olds to capture that knowledge and share that journeyman experience.  The threat, of course, is that somebody walks out the door with the knowledge that only they have and that you can’t get any other way.  And generally, we find that when they walk out, there’s some system that’s in its 32nd year, a 688-class high-pressure brine pump, and there’s one person that still knows how it was designed and how to fix it.  We make sure we keep a good tab on that person so we know where they went in their retirement, knowing we can get them back for brief periods.  The opportunity there is why do we still fix it that way?  And is there a better idea?  That young person coming up without some of those blinders may have a better way to do it.”

Modernizing and Maintaining
Combatants usually get a mid-life modernization to bring their combat systems up to date, but not always at the same time as they repair the hull, mechanical and electrical systems.  It’s a daunting task, Hilarides says.  “When we go to modernize at the same time we’re doing maintenance—where we take a ship offline for up to a year, and you want it to come out ready to go on several deployments with all the best stuff—you have this very large package that includes tank painting, main engine overhauls, all that sort of really hard stuff, at the same time that you are putting a new network on it, and a new radar on it, as with Aegis modernization.  We had treated those as two separate things that happened sort of independent of each other on the same ship, and as a result, that was making it really hard for us to get our avails done well.  And so now we’re integrating those much better.  Doing maintenance and modernization requires good solid planning and contracting.  We will continue to have to balance how much modernization we can afford, but the life-cycle maintenance has got to be done.”

Hilarides says that as NAVSEA and the Navy strive to institute a culture of judiciousness and affordability, commonality is part of that equation.

“Why do we have 247,000 types of valves on ships?  If there’s a valve we repair every quarter, that valve should be common across every ship in the fleet so that we get the economies of scale for production and repair.  If that valve never gets repaired in the 35 years of a ship’s life but once, commonality doesn’t matter.  We’ll pay that one-time cost to go do that repair.  We work on air conditioning plants all the time and we have a LOT of different air conditioning plants on all our ships.  So they’re a perfect target for a commonality initiative,” he says.  “We can get economies in acquisition, training, repair and operations.”

Hilarides has created a new position on his staff, the director of acquisition and commonality.  “We’ve stood up a directorate, and they’re on the trail of some really good things, including finding examples where we have one spec for production of a valve that gets interpreted by ten different organizations, both inside my life lines and out, such that the valve manufacturer produces 10 different packages, paperwork packages, to go with the valve he manufactures exactly the same way.  There’s savings in that.  So we’re going after that.  I think Rear Adm. Tom Kearney and his team are off on the right track.”

“When we talk through the requirements, we have to look at the cost,” Hilarides says.  “If you have to be able to make 8 knots with moderate battle damage, there’s a couple of ways you can do it.   You can take the  propulsion train—the diesels, shafts, and the screws— and put them into that full MILSPEC  hardened, no-matter-what-you-do-to-‘em, they’ll still work.  Or, you go build an armored box in the front, far away from the rest of the propulsion system, with an 8-knot outboard motor that you can lower down after that damage event, and still meet the 8-knot requirement.  We’ve spent a lot of time on that.  It really makes people uncomfortable; they’re like, “Whoa!  You put the propulsion train on a commercial standard?  It’s still very survivable, because commercial ship operators don’t want their ships to fail if they hit the bottom or get hit hard by a tug.  Still fairly good, but you invest in protecting the emergency gear.  That’s the conversation that’s going on: which parts of the ship do you not want to get destroyed by a missile?  The magazines; command and control structures; your well deck so that you can continue to get the Marines off or back on in that 8-knot transit out there?”

“It’s actually probably the best ship design discussion we’ve had in a very long time, inside the government,” he says.

“When we decided to take LCS 1 and 2 and deliver them as ships of the fleet long before the design was mature, we actually intended them to be engineering development models, to go learn, and get them wet,’ so that we design the right class of ships in the long term.  Once we owned them, we chose to deploy the first ship early,” he says.  “There’s some risk in that.  If it were an airplane, you wouldn’t deploy EDM airplanes.  We deployed an EDM ship.  It did a pretty good job.  It met the fleet commander’s need for ships out in that part of the world, and did a good job of showing the US flag.  But it had some problems, and we seemed to have spent a lot of time apologizing about that.  Well, we did exactly what we said we would do.  We took the ship, pushed it to the front as fast as possible, and learned a lot.”

By comparison, Hilarides points to the Virginia-class submarine.  “We took seven years of requirements trades; seven years of design; and seven years of construction to get the first ship out.  When it went to sea it was in pretty good shape.  But Hawaii and Missouri were much improved compared to the first two, Virginia and Texas.”

“With LCS, we chose to accelerate that process.  We took just a couple years of design; went to production early – we took a lot of risk there; and deployed early,” Hilarides says.  “Until you sail it all the way across the Pacific Ocean, you don’t really know how it will work.  We tried a new maintenance model out in Singapore, and learned a lot, and as a result of that, follow-on ships will be better and better, and the learning curve is much accelerated from what it would have been under a traditional process.

“We take some risk to provide exceptional ships at an affordable price, and we don’t always hit the mark,” he says.  “But that’s not to say we shouldn’t take any risk in our new developments.  So getting that balance right is important.” 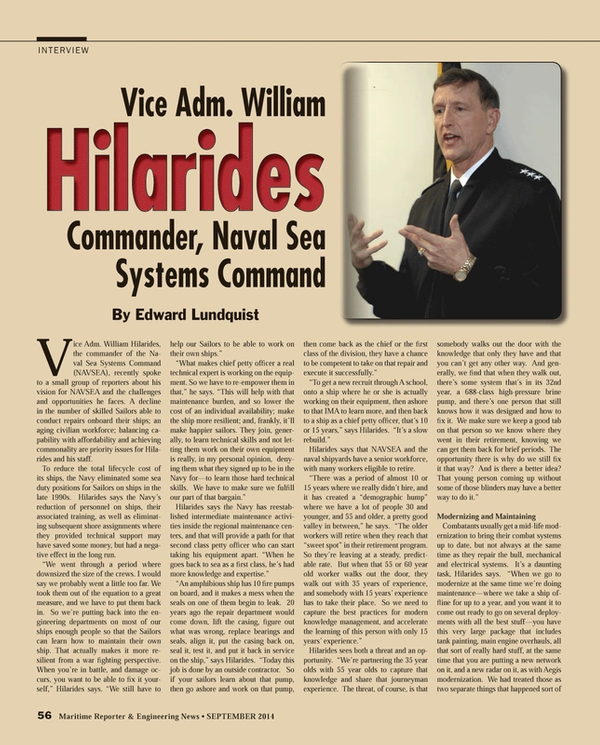