SSI
Sener won’t get any argument from SSI, which is a big proponent of 3-D software and any form of communication that leads to better design decisions made earlier  in the process.  In an April blog post, CEO Larkins crowned communications as “the most significant contributing factor to the success of ship yards.”  By which he means all the steps involved in the effective creation, sharing, dissemination and management consumption of information. “The shipyards who are good at determining not only how and when information will be shared, but also where, why and with who . . . are more effective and more successful,” he explained.
In fact, SSI, formerly known as ShipConstructor Software Inc., is all about three things:
•    Proudly Open Architecture. Notes CTO Denis Morais in a July post, “I love the idea of keeping ShipConstructor 100% purely open and competing with our competitors solely on benefit to the users. There is not a single piece of information that ShipConstructor hold hostage in a proprietary format.’’ SSI walks the walk on Open Architecture with its membership and participation in programs and study projects at the US National Shipbuilding Research Program (NSRP), The Autodesk Developer Network, Autodesk University, VIATeC, SNAME and RINA.
•    Fostering better communication, collaboration, and information flows, as early and frequently as possible, with its customers, and between the various stages of ship design and production, as noted above in Aveva’s embrace of lean manufacturing.
•    And getting customers to understand that it’s not just knowing what information to gather and where it’s located, but knowing why you are providing it that is really key. Over engineering, or too much information, can cloud an otherwise clear piece of instruction, and lead to mistakes that will have to be reworked.
The company is trying to move itself into more of a consultative relationship with its old customers and newer off shore clients. According to Larkins, SSI wants to look at the bigger picture a bit more, taking on issues like managing information flow while increasing its focus on providing services.
Spend a little time perusing the company’s various blogs written by SSI executives, including Larkins, and the shift to bigger picture thinking is clear. And they want their clients thinking too. In particular, Larkins likes to “lift the curtain” on SSI’s popular ShipConstructor package, and explain the business and technical thinking behind and impact of, the changes, approaches and upgrades in the product line, or point to an issue driving those changes, and talk about how to address it.
The company provides a lot of avenues through which customers can seek support or provide feedback, and recently added one more: Client Councils, which gather together user representatives from narrow industry sectors and regions, to advise the company on addressing their specific requirements.  “Both technology and industry requirements are evolving quickly so our clients continually need to adapt,” said SSI CTO Denis Morais.
The initial Client Council consisted of  Vripack, Peters Shipyards, Royal Huisman, Vera Navis, Marine Technologies Ltd., BMT Nigel Gee, Mustang Marine, Skipskompetanse, and Pendennis.  Some of the groups’ requests were featured in the new release: the split plate command, a new fillet cut type for stiffener end cuts, increased pipe and HVAC connection tolerance, and the ability to create MarineDrafting views in other types of drawings.  That’s the kind of response that engenders loyalty.
Ship Constructor seems to turn up everywhere, often at shipyards and architectural practices that have been with the product since its early days as CADLink in the late’80s. Joe Comer, principal of Ship Architects, Inc., claims to have bought the first ShipConstructor license from founder Rolf Oetter in 1988, moving his design process off a mainframe onto a PC. Comer still uses ShipConstructor today.  According to the company, the majority of U.S. Naval warships are now built with the SSI solutions. The U.S. Coast Guard also has taken notice, according to  Morais, and is asking for ShipConstructor –compatible deliverables on bids for its OPC Program. SSI’s flagship product, ShipConstructor serves the shipbuilding and offshore industry, and is an AutoCAD-based 3D Product Modeling and Production Planning CAD/CAM suite running on Microsoft’s SQL Server. When announcing his appointment as CEO, Larkins stressed the company’s commitment to delivering tools that are user friendly, scalable, easily adopted and implementable with minimal IT requirements. SSI combines support for the native DWG platform with industry-specific standards, terminology and best practices, and the ability to share engineering data with other business processes and applications such as MRP, ERP or PLM tools. The company claims that ShipConstructor’s Marine Information Model provides true Concurrent Engineering for the first time in shipbuilding CAD/CAM, enabling all engineering disciplines to work within a single integrated environment with associativity that extends to the production drawing level.  A side benefit of SSI’s support for Autodesk and other standards is that ShipConstructor is said to require little training and gives client a much broader labor pool.

AVEVA
Cambridge, England-based Aveva provides a family of integrated engineering design and 3D design, CAD products. The 45-year-old company is also focused on offshore clients, concurrent engineering and global collaboration. It sees its mission as enabling the creation and management of complex digital assets, allowing customers to work globally with less risk, shorter lead times and greater business efficiency throughout the lifecycle of their physical assets.
AVEVA Marine is a set of integrated applications provides engineering design and information management software to the marine and plant industries. This combination provides a level of technology integration, enabling collaboration with plant industry specialists on the most complex vessels or offshore projects, concurrent engineering, and supports highly collaborative “global virtual’’ shipyard’ projects.
Its naval architecture and hull design capabilities have been developed over more than 30 years in partnership with many of the world’s leading shipbuilders. AVEVA Enterprise offers specialist shipyard resource management capabilities enabling an efficient and integrated shipbuilding process, from initial concept to final handover.
Aveva MARS is an enterprise resource management (ERM) package with modules including Material, Planning and Production.
Last month, Aveva launched Aveva Information Standards Manager (ISM), which governs asset information using a standards-based methodology.
This is the 2d in a three-part series on Ship design and construction. Next month, the final piece will examine the fleet management and operations software market, and how those applications can help owners and operators successfully reduce and control costs while protecting profit margins. 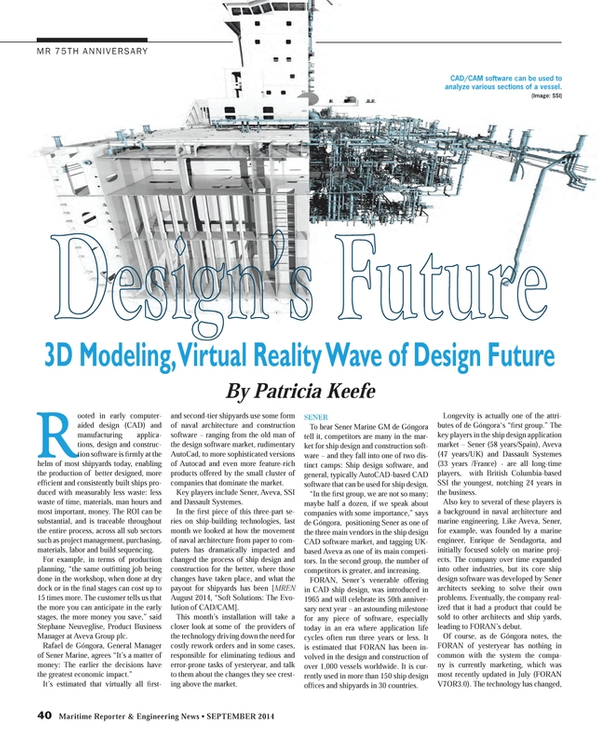