Competition in the maritime communications sector is fierce, and ship owners are the winners as service from land-to-sea is becoming faster and cheaper. MR spoke with KVH’s Jim Dodez in Athens at Posidonia for his insights on the present and future of connectivity at sea.

More than ever ships at sea demand “land-like” connectivity to the internet. Whether the purpose is maritime business or a content crew, companies such as KVH are growing their business and product portfolios at an equally rapid clip.

“The big driver in the business today is the capability of broadband,” said Jim Dodez, SVP Marketing and Strategic Planning, KVH Industries, Inc. “So it’s not one thing, it’s not entertainment alone, for example. It’s really all of the benefits that broadband can bring to a business. The operations manager, the IT manager, the HR manager are looking at the internet and the new services available on land and they are asking ‘why can’t we do that on the ships?’”

KVH has emerged as a leader in a sector that is defined by rapid fire continuous growth and consolidation (including KVH’s recent acquisition of Videotel). It brings a diverse offering to the markets it serves, including leisure, government and commercial.

In truth the ‘era of broadband on ships’ is still in its infancy, as ship owners en masse are still remiss to invest in the latest communication technology for a number of reasons, starting with cost and including concerns that full-scale entertainment and connectivity for crew could take attention from routine ship operations and safety.

But the direction is clear and broadband at sea is expected to grow rapidly, as technology improves, prices drop and the new generation of merchant seamen demand and receive similar internet access and options as they might enjoy on land.

Meet IP-MobileCast
In mid-May 2014 KVH went ‘live’ with the new IP-MobileCast, a new service designed to make it affordable for mariners to receive a wide range of content. While Dodez would not comment on buy-in to date, he did note that “We’re in the process of signing up subscribers, and we have announced 4,000 VSAT terminals in the field already who all can receive this new service.”

IP-MobileCast and services like it are designed to bring entertainment options onboard the ship that heretofore could only be found on land. Onboard treatment of the seafarer has come full circle in recent years, driven by legislation such as MLC2006 but perhaps more so by the basic need to attract and retain talented mariners from an increasingly shallow pool. KVH and Dodez believe that services such as IP-MobileCast can help to do that.

The IP-MobileCast service utilizes multicasting technology to deliver large amounts of content to many ships at once. With the new service content is delivered over the top of the network so there is no charge for the delivery, only for the content itself; and the multicasting transmission does not affect the vessel’s mini-VSAT Broadband onboard data speed. Also, the service ensures digital rights management (DRM) of copyrighted material, such as Hollywood movies and television programs; and the content is delivered using forward error correction to minimize burden on the mini-VSAT Broadband network.

Content available via IP-MobileCast is provided by KVH Media Group, a provider of commercially licensed news and entertainment content to the maritime, hotel, and retail industries.

While the connection and the content are the critical component, KVH’s new media server which was launched at Posidonia 2014 adds brawn to the system. The new media server, which retails for $4995, has a terabyte drive to start and is upgradable, has the power to store all of the broadcast content, a mass storage port which effectively enables live streaming television and movies.

While KVH has been busy developing entertainment solutions for the mariner, it has not ignored its core ship owner business customers, and in tandem the capabilities of broadband can deliver efficiencies to everyday ship operations. “The operations manager will be concerned with things like ‘how do I get my digital charts on the vessel?’” said Dodez. He sees the evolution of communication service at sea picking up serious steam in this regard, reasoning that as satellite owners focus more capacity on the ocean regions, prices drop and allow companies like KVH to lease the capacity to provide total geographic coverage of the oceans. While the satellite signal is a key component, modern electronics has played a large part too. “Through Innovation and working with modem manufacturers we have been able to bring the hardware down from a stack of equipment that filled a whole computer hardware rack down to one box,” said Dodez. “Modern electronics has allowed us to compress that into a simple, easy to install solution.” 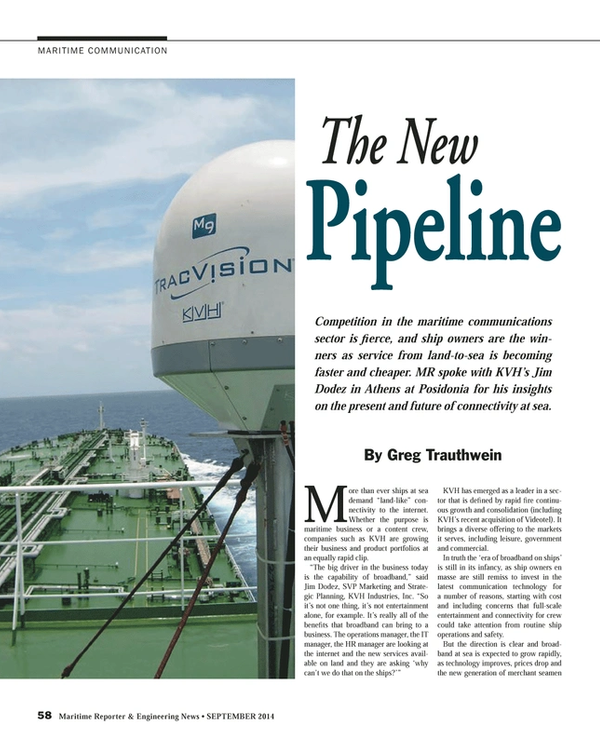