FLNG Birth of a Market

FLNG deal-making has been sporadic since Woodside Petroleum at the end of 2013 delayed a final investment decision for the giant Browse FLNG project off Northwest Australia.

The previous year had seen go-aheads for most of the floating liquefied natural gas projects (FLNG) underway today, including Shell’s Prelude FLNG — Woodside’s choice, it seems, of a liquefaction solution for fields 200 kilometers offshore. Yet Prelude, “the first project out”, might not be first to produce. The speed to market and scalability of “rival” FLNG ideas offers options for the revenue-hungry and a new market for marine and offshore early movers. Browse FLNG, too, is “on-track” for front-end engineering later in 2015.

Floating oil production might be decades old, but floating liquefied natural gas is so new that technology patents are still vulnerable. Classification societies can’t say for certain that they’ve given their full blessing to projects from top to bottom. Few projects are sanctioned — in Australia, Cameroon, Canada, Indonesia, Malaysia, Mozambique and the United States. Sixteen others offer a chance for contractors to plan their contracts now.

Competing for the mid-term opportunities to unlock stranded gas offered by new liquefaction solutions from Britain, Japan and Norway is tried and tested technology from Germany and the United States. FLNG is developing in such lurches and spurts that consortia of former rival contractors are collaborating on front-end engineering and design (FEED) and engineering procurement and construction (EPC) bids together to make sure they’re in on what comes next.

The focus is on Asia, where gas and people abound, but where a maritime continent lacks Europe’s interlocking pipelines. In Asia, shipyards anticipate FLNG orders with investments in the largest dry docks, cranes and quays ever seen. The mantra “A FEED and an Asian yard” suits FLNG well. Though still “pegged” to oil, gas prices have become increasingly regional and are nowhere stronger than in Asia, while liquefying remote African gas looks set to transform the “center” of a worldwide industry. Imperceptibly in most places, spot gas prices are showing signs of life, even if LNG carrier rates have plummeted since 2012. Against this backdrop, clutches of engineers are keen to build strength in LNG by building FLNG, which has half the price tag of land-based LNG if still pricier than piped gas.

Liquefaction Vessels
One early mover is nimble-minded Golar LNG. Against the backdrop of Browse, Prelude and Exmar’s barge-like Caribbean LNG (built) for Colombia, Golar in 2014 and again in January 2015 brought in Korean shipyard Keppel and U.S. floating liquefaction expert Black & Veatch to convert the midstream Hilli and Gimi Moss-type LNG carriers into 125,000-cubic-metre offshore FLNG vessels able to produce 1.2 million tons per annum (MMta) of LNG. The Gimi conversion is nearly half built, and the design reveals two sponsons bearing FLNG plant. Both conversions are EPC contract wins for Black & Veatch and the U.S. contractor’s veteran PRICO technology was chosen for its smaller vendor list and reliability, as well as for the targeted “clean” well stream. The PRICO kit is already key to this burgeoning FLNG market of new and old LNG players.

“The scale and speed in which we secured the contract for the GIMI is a testament of the industry’s confidence in FLNG conversion solutions,” company VP and Executive Director for EPC projects, Hoe Wai Cheong says in a 2015 statement. Golar and Keppel are “spearheading” an FLNG industry of “substantial potential”.

Two Golar FLNG contracts in short order provided upwards of $900 million each in shipyard, topsides and liquefaction work. Woodside had planned to use three FLNG vessels using Shell’s own liquefaction technology at Browse before twice delaying “decision gate”, some say to allow Australia’s enormous supplier costs lead to narrow. Meanwhile, PRICO liquefaction’s simplified plant, with fewer vendors needed, has in short order transformed an LNG ship owner into a gas producer. Rapid start-up, a reliable record and choice of size are Black & Veatch’s offering to the FLNG business. Golar and Exmar’s Carribbean FLNG (0.6 MMta) show the value and speed of scaling. The Carribbean FLNG nearshore vessel was set to produce first, when operator Pacific Rubiales decided to hold off for financial reasons. As in Western Canada, where 18 LNG projects have been submitted, smaller projects have been first to pass through environmental assessment and into financial decision-making.

Sevan Circles
While the PRICO solution might have “the lowest capital cost of all competing technologies” plus “simplified control systems” and has been reliable in at least 25 projects, relative newbies are also fostering a market with an increasingly dedicated supply chain. Modec, Kanfa Aragon (nearly 50-50 Sevan and Technip), Hi-Load LNG (Sevan) and the cylindrical floating production contractor Sevan Marine itself are all creating a stir around the promise of FLNG to recover stranded gas ahead of costlier platforms and without coastal construction (like jetties, pipeline and dredging).

Like Shell with Prelude (3.6 MMtpa, now out of dry dock) — the world’s largest floating structure — Sevan Marine has had to wade through cyclone testing to present a weather-safe FLNG design, even going the joint industry project route for permanent mooring in cyclonic conditions in preparation for a “10,000-year wave” off Northwest Australia, the South China Sea or the Gulf of Mexico. Company vice president for technology, Fredrik Major, can boast production turret designs and speaks for a company capable of getting 60,000-ton topsides aboard a cylindrically hulled floating producer.

Major says floating production sizing is the big challenge. A key design feature of the Sevan cylindrical FPSO is risers concealed behind the outer hull, so there’s no turret and “delicate” swivel mooring system. Once the darling design candidate of the postponed Russian Shtokman gas field in the Arctic, the Sevan FLNG design still seems to offer extreme open-ocean advantages with its compartments of condensate tanks on top and LNG offloading to standard carriers.

“It gives you access to the market,” Major says of FLNG to a gathering of his peers. Sevan Marine also owns the impressive HiLoad LNG business with its offloading system — a towering DP docking unit that connects to an LNG carrier with LNG and vapor return hoses.

Back to Liquefaction
One of the handful of FLNG projects being built, Petronas’s PLFNG 2 facility offshore Sabeh Malaysia is already attracting a trail of suppliers through its JGC Corp (Japan) and Samsung Heavy Industries (South Korea) engineering consortium.

Automation giant Yokogawa Electric’s controls business in Malaysia is among a growing number of suppliers connecting to the FLNG consortia. Yokogawa will deliver equipment to manage the liquefaction and storage tanks aboard Petronas’s floater for the deep-water Rotan field.

“FLNG is a market with great potential,” ABB process automation president, Peter Terwiesch, said at the time. ABB had just won a $50 million job to provide PLFNG 2’s electrical systems. Like other managers coming to grips to FLNG, Terwiesch pointed to the Douglas-Westwood report that estimates the FLNG market to be worth $64 billion from now to 2020. The container-ship-like PLFLNG 2 is — at 1.5 MMtpa of LNG — a smallish producer, but it’s yet another win for scalability.

Spread-moored
While FLNG is eking out new business for marine suppliers and liquefaction outfits, it’s also inspiring them to new business models. FPSO heavyweight SBM Offshore, which designed the mooring turret system for Prelude, has built its own FLNG concept. Together with German refrigeration expert Linde Engineering, it now has a “mid-scale FLNG option” called Twin Hull which “converts existing LNG tankers into FLNG facilities”. The company recently finished the FEED for a Brazilian LNG floater and together with Linde Engineering has designed a concept for Thai PTTEP. “In the future, SBM Offshore will focus mainly on FLNG projects where it can add most value by acting as a main contractor, as it does successfully for the FPSO market,” the company says in its earnings report, adding that medium-sized projects of “up to 2 MMtpa” will be its focus.

Marine Links
Rolls-Royce, too, is entering the FLNG fray. It’ll deliver gas engines for onboard power aboard one of Golar’s Keppel-built FLNG vessels, or FLNGVs. With energy consumption paramount aboard an FLNG — with extra compression, separation and refrigeration to service (plus ship and crew power needs) — the Rolls-Royce Bergen motors won out for energy use described as “low”. The Golar Hilli’s engines are due to be fitted in 2015.

Its conversion into an FLNGV will be finished by 2017, with the Gimi following. Golar says it will focus on “low-cost, rapid deployment” using its LNG carriers. Gas projects “requiring minimal processing” (dry, clean gas or associated gas usually flared).

“Floating infrastructure has and will fundamentally alter LNG market dynamics,” says Golar chief exec Doug Arnell. He confirms Golar FLNGVs will be used as early FPSOs were — in the doldrums of the world, or “Located offshore in benign to moderate met-ocean conditions.” Golar FLNGVs will target projects of up to 2.8 mtpa.

The award marked another joint venture of suppliers, with Shell’s blessing, as a need for an ISV concept became apparent with Prelude. KT, propulsion expert Kotug International and Teekay Shipping Australia formed the JV in 2012 with an eye to Prelude. The three, planned Browse FLNGs will, if they are built, also need ISVs to service the FLNGV’s LNG, LPG and condensate equipment, while also training for responder and evacuation roles.

FLNG Project Pipeline
A number of FLNG FEEDs and pre-FEEDs since 2008 contemplate new equipment designs, and a contest — if not a conflict — is unfolding among liquefaction factions. This game already bodes well for the supply chain.

There’s Cameroon LNG, where Golar LNG Ltd. has since New Year 2015 been partnered with Societe Nationale de Hydrocarbures and Perenco (of Cameroon) to give the Golar Hilli — to be re-named GoFLNG — new work exporting 500 billion cubic feet of gas from the offshore Kribi fields to world markets. For eight years, Golar will earn a tariff on the 1.2 MMtpa of LNG produced. That’s smallish by LNG standards, but not for FLNG or the Cameroonian economy.

“The project will be the first floating LNG export project in Africa and will see Cameroon joining the small number of LNG exporting nations,” a Golar communiqué states. Another FLNG first. As the northern spring turned to summer, Rosneft, Russia’s third-largest gas producer, signed a pact with Golar for two more tariff-earning FLNG projects for unnamed projects in the oil company’s Latin American portfolio.

Air-conditioning
So far, a fairly long list of consortia that include liquefaction contractors and vessel owners have had success with a tiny number of LNG processes.

Like the Kanfa Aragon dual nitrogen expander process, the MODEC, Toyo Engineering and Nippon Kaiji Kyokai FLNG liquefaction solution LiBro (for lithium bromide) is scalable and efficient in warm climes (doldrums). Unlike plant that might use propane to cool gas to LNG, LiBro uses the power plant’s own exhaust to cool the cargo, a safe and efficient variant sure be popular in the world’s dangerous oil provinces. Applying nitrogen as a refrigerant is not new for liquefaction technology.

As for reliability — lithium bromide absorption is the stuff of land-based air-conditioning. The company’s involvement in Petronas’ PFLNG 2 and the consortium of JGC Corp and Samsung is a sign this compact solution has a future. For now, Malaysians will marvel at another FLNG first in PFLNG 1. It’ll be Asia’s first FLNG. 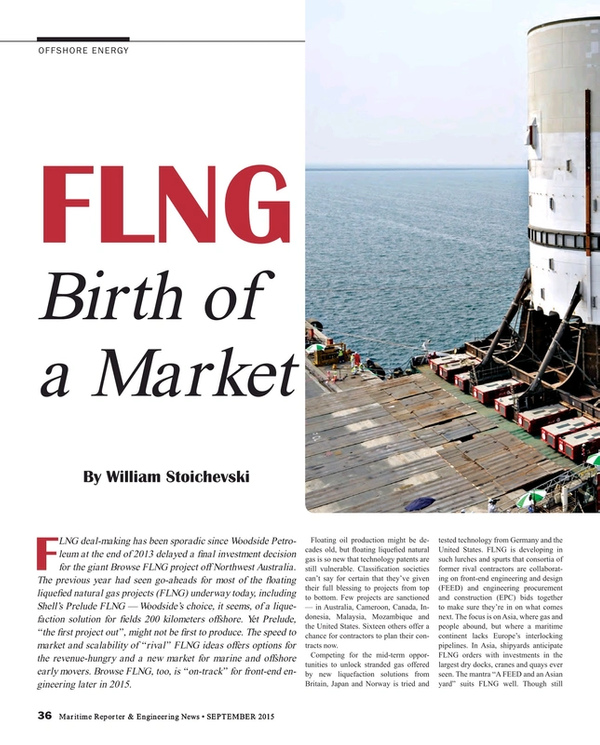 Read FLNG Birth of a Market in Pdf, Flash or Html5 edition of September 2015 Maritime Reporter