Ulstein Verft launched from its dock hall a special offshore construction vessel, Yno 302, for Island Offshore and Edison Chouest Offshore. The newbuild measures close to 160 m in length with at beam of 30 m, making it the largest offshore vessel built at Ulstein Verft to date. A video of the launch is available here: https://www.youtube.com/watch?v=tXHDzPQsuYM&feature=youtu.be. According to Ulstein, the vessel’s total steel volume is about 8,800 metric tons – approximately the same as five platform supply vessels. Of this volume, Ulstein Verft’s department in Vanylven has produced approximately 1,520 metric tons, the largest steel volume delivered to one project from this department.

Scheduled for delivery Q4 2015, the vessel remains at the shipyard as its heli deck is currently being mounted.
The vessel, jointly owned by Norway-based Island Offshore and U.S.-based Edison Chouest Offshore, will be managed by the latter, and thus carries the Edison Chouest colors and logo. Edison Chouest Offshore and Island Offshore ordered Yno 302 in 2013 through the company Island Ventures II LLC as part of a two vessel deal which saw one vessel built at Ulstein Verft, and the other in the U.S. at Edison Chouest’s LaShip yard in Houma, La. Both ships are of Ulstein SX165 design. The ABS-classed vessels include accommodation for 200 people and are equipped with two cranes capable of lifting 400 tons and 140 tons, respectively. The vessels each feature three separate engine rooms, enabling two-thirds operational capacity to be maintained should an error force an engine rooms to go out of service. In addition, the ships are equipped with SCR catalyst system for NOx emission reduction.
(As published in the September 2015 edition of Maritime Reporter & Engineering News - http://magazines.marinelink.com/Magazines/MaritimeReporter) 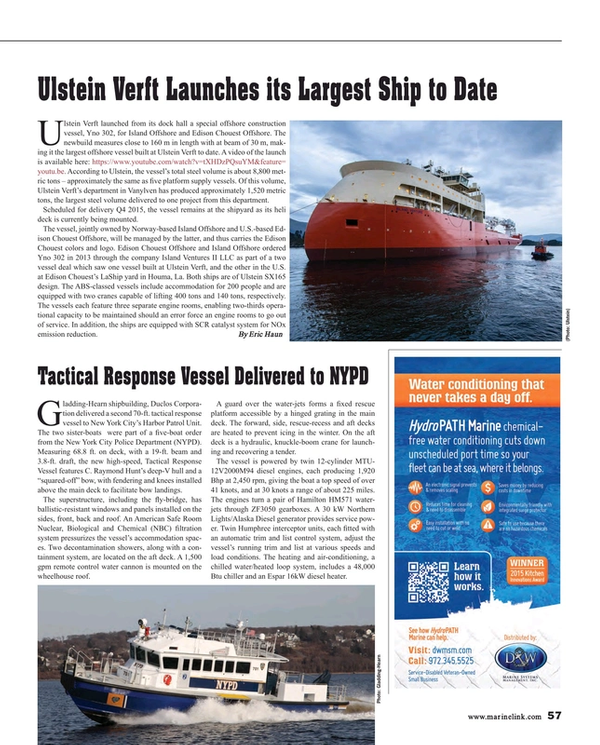