As vessel owners struggle over the best and most efficient means to meet stringent new emission regulations, the Interlake Steamship Company has proven phase one of emissions-reduction technology on Great Lakes;  and two additional ships are to be outfitted with exhaust gas scrubbers in 2016. Following the implementation of exhaust gas scrubbers on its self-unloading bulk carrier M/V Hon. James L. Oberstar, the Interlake Steamship Company said it plans to expand its emission-reduction efforts to one-third of its fleet by installing similar scrubber systems on the M/V Lee A. Tregurtha and M/V James R. Barker early in 2016. In April 2015, Interlake became a pioneer, installing freshwater scrubbers on the Great Lakes when the system became operational on the 806-ft. Oberstar. The 826-ft. Tregurtha and 1,003-ft. Barker will be equipped with the same single-inlet, closed-loop DuPont Marine Scrubbers from Belco Technologies Corp. (BELCO), a division of DuPont Sustainable Solutions.  Interlake President Mark Barker, who has driven innovative solutions in a very traditional market, said “this technology allows us to achieve our goal of continually shrinking our fleet’s environmental footprint while dependably, safely and efficiently delivering raw materials to our steel, construction and power generation customers throughout the Great Lakes. We have proven the technology on our 800-ft. traditional Laker and now we’re ready to scale up to our 1,000-ft. class ships with our first installation on the James R. Barker.” A total of five Interlake vessels  will be outfitted with these types of scrubbers by 2017.

How it Works
The scrubber units, which are attached to the exhaust system of each of the ship’s two engines, effectively strip the majority of sulfur from its stack emissions. Exhaust gas from the engine is sent through a series of absorption sprays that “wash” and remove impurities, specifically sulfur and particulate matter. That washed gas then travels through a droplet separator before a clean plume of white steam is discharged into the atmosphere.  “The sulfur reductions have exceeded our expectations,” Barker said.  At the end of the 2015 navigation season, the Tregurtha and Barker will sail to Bay Shipbuilding in Sturgeon Bay, Wis., to have the scrubbers and associated equipment installed during winter layup, in early 2016.
Bay Shipbuilding is where the first installation on the Oberstar was completed earlier this year. The scrubber system relies on an injection of sodium hydroxide – to neutralize and remove sulfur from the exhaust gas – and that chemical has to be delivered to the vessel about twice a month. Working with partners, Hawkins Inc., PVS Chemicals Inc., Garrow Oil & Propane and OSI Environmental, the company has established waterfront supply capability at Sturgeon Bay, Wis., and Detroit, Mich., and expects to develop a similar capability in Duluth, Minn., hopefully within the next month. From there, the supply-and-delivery infrastructure will be built out at ports located near East Chicago, Ill., and Burns Harbor, Ind. 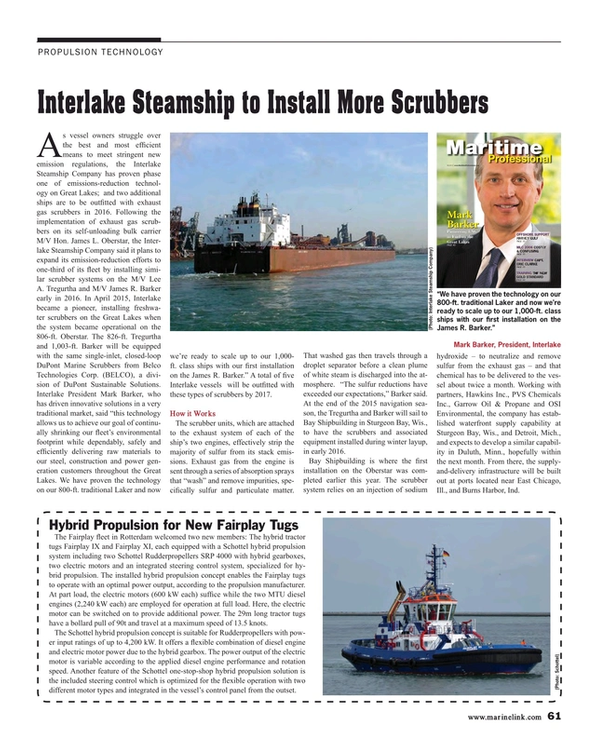