Bart Otten heads the Fire and Security Business Unit of UTC in Europe, Middle-East and Africa both for the land and marine business sides. He is also in charge of United Technologies’ entire Marine business initiative. Based in the Europe head office in Brussels, Otten, a Dutch citizen himself, has worked within the UTC Group since 2007.
United Technologies Corporation provides a broad range of high-technology products and services to the global aerospace and building system industries. Listed on The New York Stock Exchange net sales of UTC in 2014 were $65.1 billion. UTC employs more than 212,000 people. In 2013 Thomson Reuters listed UTC among the world’s 100 most innovative companies, and UTC ranks number 45 on Fortune Magazine’s list of 500 largest U.S. companies. UTC is well known for its aerospace and defense products, among them Pratt & Whitney propulsion systems. It recently received much media coverage through the sales of the Sikorsky Aircraft business to Lockheed Martin Corp.
UTC Building & Industrial Systems business is the world’s largest provider of building technologies with some 118,000 people, 77 factories, 48 R&D centers, and some 2,500 branch offices around the world, and representing approximately 45% of consolidated sales. Otten heads the global marine businesses development initiative of UTC which includes the marine business of the well known Otis elevators, Carrier air conditioning and heating systems, Autronica Fire & Security and Marioff, two other companies well known to the maritime industry. “UTC is a 65 billion dollar business globally. If you look into the individual brands I would say Autronica, Marioff and Carrier are leading brands within the marine segment. In quite a number of cases we have a very strong position in the marine segment,” Otten tells Maritime Reporter at UTC’s exhibition stand at Nor-Shipping. “I have been working in the fire and security industry for 27 years. Our Fire and Security business goes from a simple extinguisher to the entire fire suppression system of Marioff and detection systems by Autronica but includes also video cameras and access control.”
We talk about the history of Otis, which has been in business for more than 160 years, and which delivered its first marine elevator to the U.S. Navy in 1915. “With Otis elevators we are re-entering into the marine space.” UTC acquired the Spanish Enor marine elevator company in 2012, to re-enforce its marine elevator applications. “Here we are not in a leadership position from the market segment point of view, but I would say we are more and more in a leadership position from the technology point.” Also the other companies have a long history.
Carrier was established in 1902. It supplied the first ocean liner HVAC system ever, to S.S. Normandie. Today Carrier Marine & Offshore operates globally.
Autronica Fire & Security has supplied fire and gas safety systems since 1957 and has, as Marioff, references onboard thousands of vessels. Marioff, the originally Finnish company that invented the HI-FOG high pressure water mist fire suppression system, was acquired by UTC in 2007. Other well known brands and companies owned by UTC include, among others – Automated Logic, Chubb, Kidde, Lenel, and Onity.
Maritime Reporter learned that UTC is today focusing more on a joint approach in its sales to the maritime industry. “The companies have an individual approach towards the customer, but if we are negotiating some big projects with the large shipyards or ship owners, we will see more and more a joint large-scale UTC approach towards these customers. We say – Hey, we do not only offer Autronica or Marioff but we also offer Otis elevators and Carrier and what is important here, we can do a good level of technology integration for the benefit of you as a client,” Otten said.
“We are taking a joint approach to the marine segment, so you will see us not only run exhibition stands with all the marine businesses joining, but we will be utilizing our global network and the specialized expertise in each individual brand in developing our global marine services,” Otten said. He also wants to highlight the technical developments taking place. “It is important that we work more and more on technology integration of the systems and solutions that we offer to the marine industry. You will soon see integrated solutions by UTC onboard ships.”
As an example he mentions Autronica’s ISEMS emergency management and evacuation system already working together with Marioff’s HI-FOG suppression system but there is a lot more of integration possibilities.
Otten does not want to reveal much about their future plans regarding acquisitions.
“I think that if you look into the marine segment, I would say, we have a pretty solid coverage today, but we always look out for opportunities that are complimentary to our product lines.”
“I think the marine segment offers for UTC a significant opportunity for growth, especially the cruise ship segment. I think if you look at the cruise vessel segment everyone recognizes that it has been a successful industry that is fast growing, when you look at the number of cruise vessel orders. That is outstanding. It is an attractive hi-tech segment where we have a lot to offer. Looking outside of cruise vessels we are also in the other ship and offshore segments too, so marine is a very relevant industry for UTC where we invest a lot. Half of Marioff’s business is within the marine segment and that of Autronica is some 35 percent. We have dedicated Carrier and Otis teams for the marine segment so we consider marine as attractive and important.” 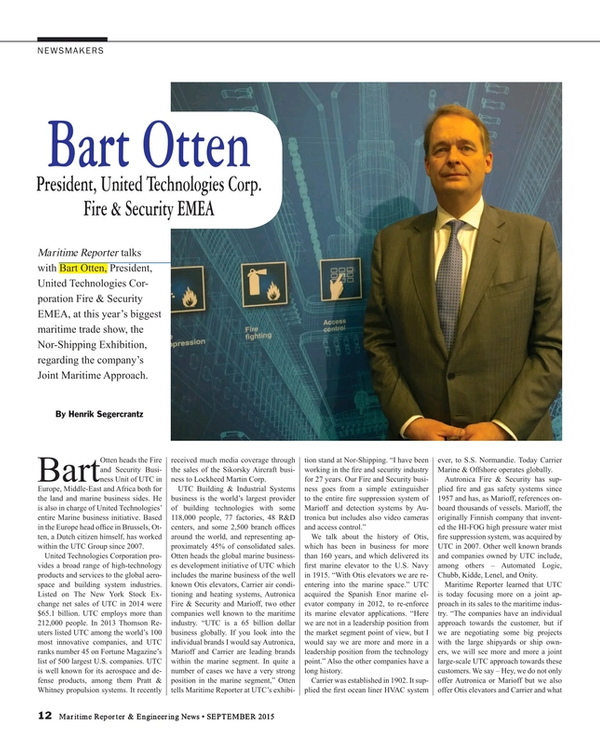