On June 23, 1995, the cruise ship Star Princess, carrying 1,568 passengers and 639 crew, grounded on charted and marked Poundstone Rock in the Lynn Canal of Alaska. Although there were no deaths or injuries, the ship’s bottom was ripped open. Repairs cost $21.16 million. The National Transportation Safety Board (NTSB) determined that the probable cause was the pilot’s poor performance, which may have been exacerbated by chronic fatigue caused by sleep apnea. Among other things, the NTSB recommended that the U.S. Coast Guard advise pilots about sleeping disorders such as sleep apnea and review its medical standards, guidelines, and examination forms to ensure that they require disclosure and appropriate evaluation of the history or presence of any medical conditions, symptoms, or medication use that would affect an individual’s fitness for duty as a pilot.

On 23 January 2010, the tanker Eagle Otome was inbound in the Sabine-Neches Canal en route Beaumont, Texas. The general cargo vessel Gull Arrow was docked at a facility on the Canal unloading cargo. The outbound towboat Dixie Vengeance was pushing two barges, the tank barge Kirby 30406 being the forward barge. The tanker experienced several unintended diversions, culminating in it striking the moored cargo vessel. Despite the towboat putting its engines full astern, a collision between the tanker and the forward barge of the tow ensued. There were no deaths or injuries, but there was a significant oil spill and significant damage to the vessels involved. The NTSB determined that the primary cause of the casualty was the failure of the pilot on the tanker to correct the shearing motions that began as a result of the late initiation of a turn at a mild bend in the waterway. Contributing to the casualty was the pilot’s fatigue, caused by his untreated obstructive sleep apnea and his work schedule.

The Coast Guard recently announced a proposed change to its policy regarding specific medical conditions, including obstructive sleep apnea, which it would consider in determining whether a medical waiver is warranted for merchant mariners applying for new or renewed merchant mariner credentials (MMCs). The proposal, particularly with regard to sleep apnea, has received strong support from the NTSB and the American Academy of Sleep Medicine and qualified support from the American Pilots Association (APA).

Definition
The Mayo Clinic describes sleep apnea as “a potentially serious sleep disorder in which breathing repeatedly stops and starts.” The most common type is obstructive sleep apnea in which the throat muscles relax while the individual sleeps, blocking the airway. This leads to a deprivation of oxygen (hypoxia) in the blood stream and an excess of carbon dioxide (hypercapnia). In extreme cases, which are rare, this may result in death. Commonly though, sleep apnea interrupts normal sleep (even if the individual is unaware of the interruption, as is quite common), making sleep less restful. The individual has issues with excessive daytime sleepiness and impaired alertness, slower reaction times, and vision problems. Sleep apnea increases one’s risk of driving accidents and work-related accidents. It can also exacerbate moodiness, belligerence, as well as decreasing drive (including the sex drive). The NTSB has documented numerous transportation accidents, across all modes, where sleep apnea was the leading or contributory cause.

Diagnosis
The medical professional may suspect that an individual suffers from sleep apnea based on existing symptoms, such as excessive daytime sleepiness and fatigue. A formal sleep study is then undertaken. This study, normally performed in a clinical setting, establishes an objective diagnosis indicator linked to the number of apneic (interrupted) events per hour of sleep. Mild obstructive sleep apnea (OSA) is generally considered to have between five and 15 events per hour, moderate OSA has between 15 and 30 events per hour, and severe OSA has in excess of 30 per hour. An apneic event generally is defined as a minimum ten-second interval between breaths, with either a neurological arousal (a three-second or greater shift in EEG frequency) or a blood oxygen desaturation of 3 percent or greater or both.

What can be done?
While surgery may be called for in extreme cases, most often obstructive sleep apnea can be effectively managed with continuous positive airway pressure (CPAP) or automatic positive airway pressure (APAP). The individual wears a plastic facial mask while sleeping. The mask is connected by a flexible tube to a small bedside CPAP or APAP machine. The CPAP machine generates a predetermined air pressure to keep the individual’s airways open during sleep, eliminating the interruption of normal respiration during sleep. The APAP machine uses a sensor to adjust the air pressure so as to maintain the appropriate level. Although such therapy has proven extremely effective and is less expensive than other options, some individuals find it quite uncomfortable, causing chest discomfort, skin or nose irritation, and a feeling of being trapped. Tests are underway on neurostimulation techniques that sense respiration and apply mild electrical stimulation during inhalation, which pushes the tongue slightly forward so as to open the airway. Medication is being tested for central sleep apnea (which is relatively rare), but none has been identified yet for OSA. Low doses of oxygen has been tested as a treatment, but is discouraged due to side effects. Dentists can fabricate an oral appliance, called a mandibular advancement splint, which shifts the lower jaw forward and opens the bite slightly. Such a device has proven successful in individuals with mild to moderate OSA.

It is estimated that more than 6 percent of Americans suffer from at least moderate sleep apnea. Risk factors include sex (males have a higher risk than females); excess weight; large neck size (having more tissue in the neck to press against the airway); enlarged tonsils or tongue; small lower jaw bone; gastroesophageal reflux (commonly called heartburn); allergies; sinus problems; a family history of sleep apnea; or a deviated septum. Other factors include smoking; excess use of alcohol, sedatives, or tranquilizers; and age.

Sleep apnea is increasingly recognized as a threat to maritime and transportation safety. What is unclear is the level of this threat and the appropriate response. The severity of sleep apnea varies greatly. Thus, its impact on maritime safety varies greatly. Recognition that sleep apnea presents a threat to maritime safety is the first step to addressing the problem, but only the first step in a complex process. Further data must be gathered to determine how to structure an appropriate approach for addressing each individual mariner’s situation. This will require the combined efforts of the U.S. Coast Guard, the medical community, the maritime industry, and individual merchant mariners. 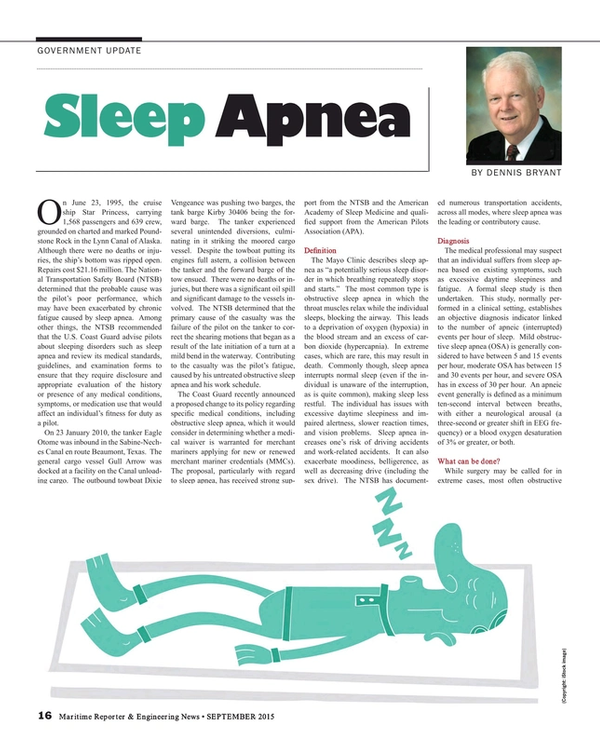