For more than 100 years the U.S. has depended on State Maritime Academies (SMA) to produce USCG licensed merchant officers. The SMA’s have also been an important source of U.S. Navy and U.S. Coast Guard officers, as well as trained personnel for the maritime industry and electric power industries ashore. Key to training these future deck officers and engineers has been the annual sea cruise on dedicated training vessels.

The current SMA training ships, all of which were built for other purposes and later converted to be training ships, are getting old. The oldest one, Empire State VI at New York Maritime College, was originally built as a cargo ship in the early 1960’s and has outdated steam propulsion. The newest training ships, at Cal Maritime and Maine Maritime, will soon be 30 years old. Much of the equipment on these ships is obsolete and vastly different from equipment on ships being built today. The U.S. Maritime Administration (MARAD) owns and funds the training ships and has embarked on a program to design and, it is hoped by many in the maritime industry, to build replacement training ships able to offer training with modern propulsion systems and navigation equipment, while also outfitted with improved berthing and equipped with flexible and fully wired class rooms, workshops and laboratories. Because the vessels are at the pier much of the year and they are U.S. government owned and managed, they can also be useful assets for government response to humanitarian and disaster crises in coastal and port areas. This ability to merge two primary missions into one vessel is a critical design feature that MARAD is looking to incorporate in the new training ships and is the reason for the class name given to them, the National Security Multi-Mission Vessel (NSMV).
Initial Design
Herbert Engineering Corp (HEC) was contracted by MARAD to prepare the NSMV design, and in 2015 a concept level design was prepared, with the Phase 3 design completed in early 2017, delivering a package that is expected to be sufficient for shipyards to prepare bids to build NSMV as the project progresses. It is hoped the new vessels will be delivered to all five SMA’s over time, starting first with the Academies with the oldest training ships.
Development of Requirements and Application to the Design
HEC and MARAD undertook a major effort to determine what features and capabilities to include in the NSMV design to best incorporate the wish lists of each SMA as well as the mission requirements for humanitarian relief and disaster relief (HA/DR). This has been an ongoing process for the two groups, working in consultation with the SMA’s and relevant parts of the U.S. government. There have been several rounds of design review and comment by the interested groups.
To start, MARAD in consultation with the SMA’s developed a list of unified requirements. The HEC design team then visited three of the training ships – at Cal Maritime, Mass Maritime and NY Maritime – to see how the training ships worked and to hear from the schools themselves what they wanted to see in the new training ships and equally important, what should be avoided. Fulfilling the requirements to be both a training ship and a HA/DR ship required a lot of design decisions and tradeoffs. Some of the key design features include:
Propulsion System
One of the key items to be resolved during the design was the propulsion system to be used. Normal today in passenger ships is the use of diesel electric power, useful because of the large ship service electric loads to service the large number of persons onboard and because the engines can be put on line or taken off line to suit a wide range of operating speeds. These same requirements applied to NSMV so the initial decision was made to adopt an integrated electric drive propulsion system, similar to cruise ships worldwide. The simplest and most common prime mover for the electric generators are medium speed diesel engines. These offer low initial cost, relatively small size, and good fuel efficiency. These advantages made them attractive to both MARAD and HEC and thus the decision was made to use diesel electric propulsion on NSMV. This met with some resistance from the SMAs, who are looking at the training aspects of the vessel as well as efficient operation. However, it was felt that alternative propulsion methods such as steam turbines, gas turbines, or low speed diesels would significantly increase the cost for construction, and in some cases significantly raise fuel consumption. Furthermore, low speed diesel is not well suited for electric drive, and it was believed training was available on these alternate propulsion systems using simulators or shore side installations.
NSMV Design Team
Herbert Engineering collaborated with several other companies to provide the full range of design capability needed for a full ship design.
Key contributors were as follows:
DESIGN PARTICULARS
Length o.a.: 159.85 m (524.5 ft.)
Beam: 27 m (88.6 ft.)
Draft: 6.5 m (21.4 ft.)
Design service speed: 8 knots/15% sea margin
Cruising Speed: 12 knots
Propulsion: Diesel Electric
Propulsion engines: 4 x Diesel Generators
Total installed Power: 15,680 kW
Propellers: 1 propeller, fixed pitch
Rudders: 1 flap type rudder on centerline
Fuel: Single fuel - marine gas oil (MGO), max Sulfur content 0.1%
Bow Thruster: retractable combi type - tunnel thruster in up position, azimuthing thruster in down position, “Take Home” source of power, 1450 kW
Stern Thruster: Tunnel type, 890 kW
Fuel Consumption: 60 tons/day @ 18 knots,  26 tons/day at 12 knots
Fresh Water (including sanitary water): 35 gal/day per person for 700 = 93 tons + 5 tons Ship Service FW = 98 tons/day
Fuel range: About 11,000 nm range @ 18 knots design speed with 10% remaining fuel
Food & Stores: 60 days food storage for 700 persons, 297 sq. m. (3,200 sq. ft.) reefer provisions,  240 sq. m. (2,580 sq. ft.) dry provisions
Propulsion motors: 2 x 4,500 kW propulsion motors. Motors in separate watertight compartments.
Electric Power: 6,600 V main power generation, 440 V ship service electric power, 120 V lighting and accommodations
RoRo deck: RoRo space aft with length of about 40 m (130 ft), width inside framing of 24 m (80 ft), clear height of at least 4.7 m (15.3 ft). Usable deck area is about 1,000 sq. m. (10,700 sq. ft.). Suitable for about 10 x 40 ft trailers with 26 autos or about 49 autos/light trucks.
Total container capacity: about 64 TEU for two high.
Crane: 1 x Jib Boom type with 35 MT SWL x 24 m outreach
RoRo ramp: 20 ft. wide watertight wide side ramp with 40 ton capacity
Thae Author
Eugene van Rynbach is Vice President, Herbert Engineering Corp.
(As published in the August 2017 edition of Maritime Reporter & Engineering News) 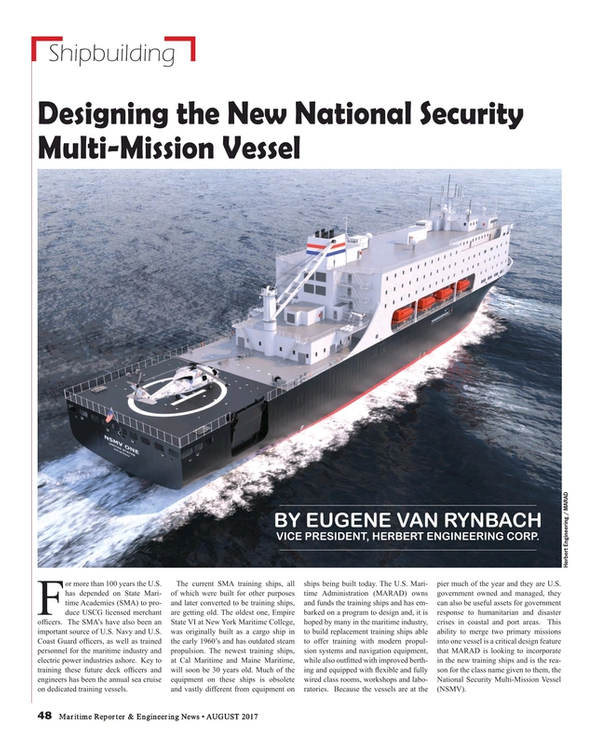