In February 1989 the RoRo vessel Vinca Gorthon ran into heavy weather and sank off the Dutch coast. She landed on an oil pipeline that was severely damaged. Although the probability of sinking on top of a pipeline is very small, the incident showed that it can happen.

Shipping traffic can represent a potential hazard to subsea pipelines in various ways, such as sinking or grounding, lost containers or an anchor hooking onto a pipeline. Over the years MARIN has contributed to the development of a method by which the burial depth of a cable or pipeline is determined on the basis of actual exposed risk to the asset. This Risk Based Burial Depth method (RBBD), developed by ACRB, combines the frequency of the different events (maritime threats) happening, based on AIS data and incident databases, with the consequences of these threats based on the structural integrity of the asset. MARIN provided the input for the incident frequencies by combining AIS data, nautical accident models and historical (accident) data.
Seabed characteristics, such as soil data and seabed mobility, are included and integrated into the assessment of the probability of failure and risk. The probability of failure is determined for relatively small segments of the asset (in most projects 100 m). By adjusting the burial depth of different segments of the cable or pipeline, the probability of failure of the whole asset can be optimized in an efficient way.
The method has been applied in the design phase for new assets, as well as in the operational phase to determine the need for remediation - for example reburial or rock dumping. It proved to be an effective tool to demonstrate that initially proposed rock dumping was not required because the location was in an area with very low shipping intensity. The method has been successfully applied to several pipelines and cables in the North Sea, for example export cables connecting offshore wind farms to the Dutch coast, an interconnector cable between the U.K. and Denmark, and a large diameter gas pipeline between The Netherlands and the U.K.
The Author
Yvonne Koldenhof is Senior Project Manager at the Nautical Centre of MARIN, the Maritime Research Institute Netherlands.
(As published in the August 2017 edition of Maritime Reporter & Engineering News) 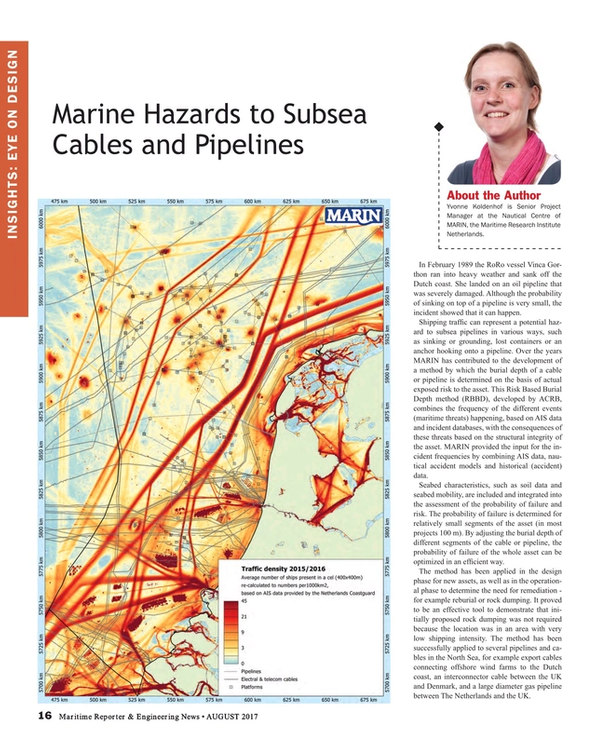