With more than 90 percent of global trade carried by sea, shipping is a major battleground in the reduction of emissions. Tier III is the latest emission standard pertaining to NOx emissions from marine diesel engines. Tier IV is expected to come into effect for 2020 – with engine manufacturers already seeking sealing components to future-proof engines well into the next decade.

Here we explore challenges faced by diesel engine operators in the face of Tier III, and how the correct selection of sealing materials could deliver better performing solutions.
NOx and Sealing in Newer Engines
Clean fuel is a key sealing challenge for newer engines. The cleaner the fuel, the more chemically aggressive the fuel is to elastomer seals. The properties of the sealing material are critically important. Potential cost savings are substantial. Typical dry dock costs for maintaining a marine engine can be upwards of $100,000 per day – and with seal changes within a fuel injection system taking approximately 10 days, an unreliable seal isn’t cheap. The correct choice in seal material can deliver a greater period of time between MRO windows.
Additionally, newer engines tend to run at elevated temperatures for longer. Long term exposure to mid-range temperatures can result in an increased rate of degradation over the lifespan of the seal. The seal technology required will typically migrate towards highly fluorinated seal materials, such as FFKMs.
NOx and Sealing in Older Engines
Older diesel engines may require additional works in order to comply with Tier III and upcoming Tier IV requirements, potentially involving the installation or retrofitting of system upgrades.
1. Low Pressure LNG Engines
Marine engines able to run on low pressure liquefied natural gas (LNG) operate on a relatively high air fuel ratio, with a pre-mixed charge of air and fuel ignited by pilot fuel. These low pressure LNG engines produce NOx emissions which are already below Tier III.
With engines of this type, low temperature capability of the seal material is a concern. An experienced sealing engineer can advise on the optimal choice of seal for applications demanding reliable performance in thermally and chemically aggressive environments.
2. Selective Catalytic Reduction (SCR)
SCR involves the injection of ammonia or urea into exhaust gas, before being passed through a high temperature catalyst unit. These additives react with NOx present in the exhaust gases, reducing NOx to harmless N2. Using retrofitted SCR technology, older engines can reduce emissions by up to 90 percent.
The pressure drop across the SCR unit requires a highly efficient turbocharger for the system. Together with the NOx to N2 reaction only being viable between 300°C and 400°C, seals in these systems need to demonstrate high thermal resistance.
3. Scavenge Air Moisturizing
After passing through turbochargers and compressors, air is at a high temperature. Seawater can be added to saturate the air and bring down the temperature. Levels of optimal humidity are maintained by keeping scavenge air temperatures between 60°C and 70°C, with expected NOx reductions of around 60 percent.
High humidity has the potential to reverse the cure of some older seal technologies. In such harsh environments, specially engineered terpolymers offer a more reliable sealing solution.
4. Exhaust Gas Recirculation (EGR)
By recirculating exhaust gas through a scrubber unit after the turbocharger, engine operators can reduce NOx emissions by between 50 percent and 60 percent. However, the cleaning water can become highly corrosive to seal materials after sustained use.
Highly developed perfluoroelastomer materials, like Perlast®, have demonstrated almost universal chemical resistance in the field.
5. Miller Cycle
In four-stroke engines, the expansion and cooling of intake air has a reducing effect on NOx production – particularly when coupled with Direct Water Injection (DWI) or water-in-fuel emulsions. NOx reduction through the Miller cycle method will require two turbochargers.
In two-turbocharger assemblies, elastomer seals have a significant buildup of heat to contend with. If using water-in-fuel emulsions, the sealing system will need to handle a diverse band of chemistries. FFKMs perform well against thermal and chemical aggression.
6. CSNOx
In this method, the scrubbing process uses electrolysis and seawater to convert atmospheric CO2, SOx and NOx into non-harmful substrates for safe disposal. Compact and low maintenance, the CSNOx unit is a popular solution for cutting emissions. Some older seal technologies are prone to swelling in high concentrations of CO2. For a longer lasting sealing system, there are materials choices less likely to fail through chemical swell.
Decisions taken in respect of engine modifications may significantly reduce NOx and SOx emissions, but operators need to be aware of the effect on sealing components.
Consultation with an experienced sealing specialist can ensure that the resource involved in ensuring Tier III compliance is not undone by improper material choice in the seals, and that once chosen, optimised seals are sized and fitted correctly to deliver engine efficiency, long term reliability and reduced cost of ownership.

The Author
Omer Raoof is Business Line Leader for Oil and Gas at Precision Polymer Engineering. He brings several years experience in the delivery of sealing support for global oil and gas markets.
(As published in the August 2017 edition of Maritime Reporter & Engineering News) 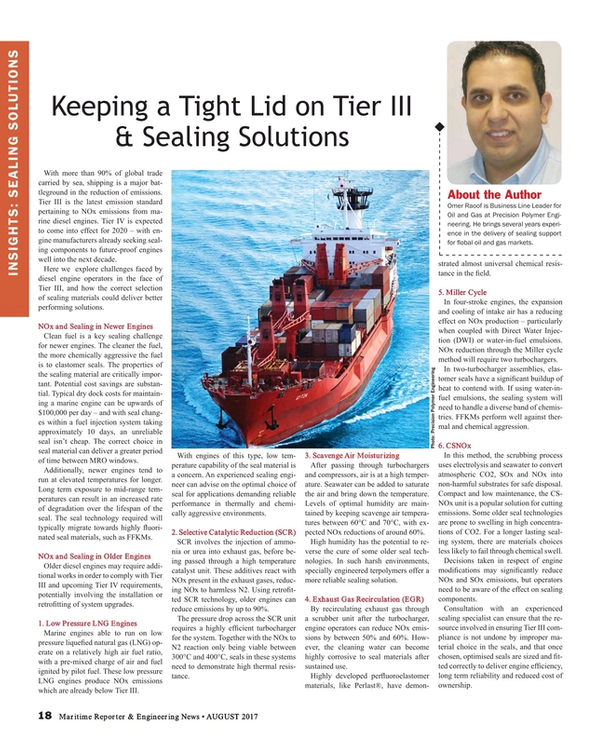