From humble beginnings KVH has evolved rapidly to become a central player in the maritime world’s global Big Data revolution. Maritime Reporter & Engineering News caught up with Martin Kits van Heyningen in Oslo for his take on KVH’s current position and future direction.

“We certainly didn’t envision that we would be in the high-speed satellite broadband business when we started,” is how Kits van Heyningen, President, Chief Executive Officer, and Chairman of the Board, KVH, succinctly summarizes the biggest difference between the company he founded in 1982 versus the one he leads today.
In 1982, Arent, Robert and Martin Kits van Heyningen launched the world’s first digital compass for use in racing sailboats. The product and the company were both dubbed Sailcomp, and as products and applications were added the company changed the name a few years later to KVH Industries. Today KVH Industries is a manufacturer of solutions providing global high speed internet, television and voice services via satellite to mobile users at sea, on land and in the air. It is a manufacturer of sensors and integrated inertial systems for defense and commercial guidance and stabilization applications. “We still do quite a bit with sensors. The digital compass is where we started, and from there we moved to interfacing with the autopilot, the radar and eventually, antennas. That is how we got into the business of building antennas,” said Kits van Heyningen. “The technology today is different, but the focus on innovation (at KVH) remains the same.”
“It’s a new approach”
Just before the NorShipping exhibition in Oslo, KVH Industries announced the availability of AgilePlans by KVH, an all-inclusive Connectivity as a Service (CaaS) offering for maritime. “It’s a new approach,” said Kits van Heyningen, noting that there are no installation costs, no hardware to buy and no long-term sign-up plan. “We tried to do something that no one else is doing. We are not content being a ‘me too’ company.”
AgilePlans confirms this, as for a monthly fee starting as low as $499 it brings an advanced satellite communications solution onboard with the aim of providing better communications and improved operational efficiency at sea. “We coined the phrase ‘connectivity as a service,’” said Kits van Heyningen. (see box on ‘AgilePlans’).
Maritime & Data
The data revolution in maritime is slowly picking up steam as new generations – ‘internet natives’ – enter the workforce, and as increasingly large and global players exploit the efficiencies of broadband connectivity for competitive advantage. In addition, the drive for fewer crew and ultimately autonomous operations plays no small role in the evolution of broadband onboard.
The maritime industry is broadly considered ‘conservative,’ and Kits van Heyningen explains that it is wholly unique from nearly every other world industry in one key regard: (In every other industry) people are trying to figure out how to get more and more data. Over the last 30 years the maritime industry has been trying to figure out how to not transmit data from a vessel. Even as the technology has improved, the mindset remains: “how can we limit data.”
Kits van Heyningen sees attitudes changing with the generational shift, particularly as it becomes more difficult to attract the younger generation to a life at sea. “Nobody wants to be cut off from the internet, social media and email for months at a time.”
Even though his business is supplying the technology tools, Kits van Heyningen is the first to admit that high-tech tools alone are not the silver bullet answer to true data ‘disruption’ in the maritime sector. “If you simply increase your speed, but continue to do things as you have always done before, it is not an effective solution.” For example, a company that incorporates a VSAT solution yet continues to transmit information via email might complain that ‘nothing happened,’ he said. But when the company starts transmitting engine or weather data real-time, the experience changes. “All of the sudden they realize the benefit of changing the process, not just the tool.” To that end, Kits van Heyningen sees KVH as a partner, working with companies to help them maximize a system’s effectiveness.
So continues the evolution of KVH, a true chameleon that consistently scouts new opportunities for its innovation. (In terms of investment strategy) we tend to have a much longer horizon than other public companies, said Kits van Heyningen. We still try to take (measured) risks, so if that means changing the company or taking a pause in your growth strategy, we’ll do that. “You need to re-invent yourself.”
AgilePlans by KVH in Brief
AgilePlans by KVH is, well, ‘agile.’ With the mantra ‘connectivity as a service’ KVH aims to deliver highest quality connectivity with no up-front fees and purchases. Monthly plans start at $499 per month, and include:
KVH @ a Glance
(As published in the August 2017 edition of Maritime Reporter & Engineering News) 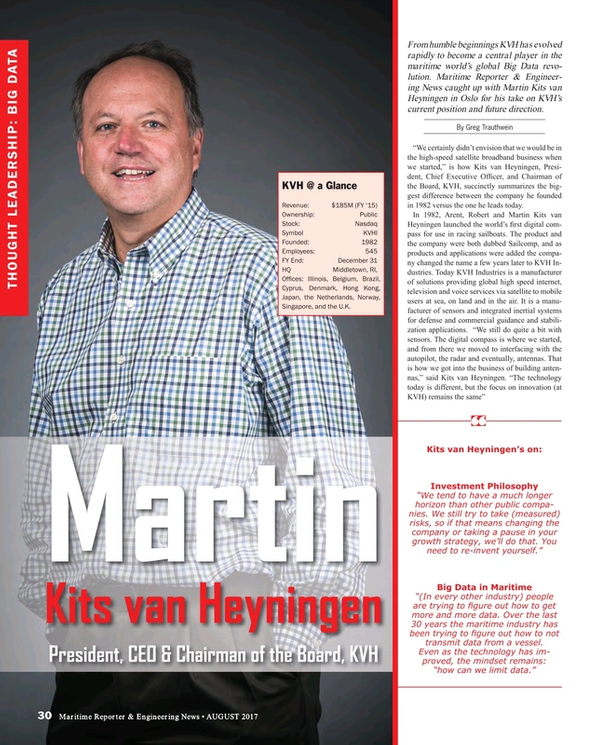