Within the last decade, containerization has transformed the appearance and operations of many ports in the developed world and has established a dominant position on virtually all deepsea general cargo routes between industrial nations. Despite some significant developments recently on routes to the Caribbean and Middle East, its impact on the ports and trade of the Third World generally remains limited.

There are widespread doubts on the applicability of this sophisticated, capital-intensive system to the needs and resources of less developed countries, and the spread of containerization into the Third World arena is being fiercely resisted by more conventional forms of shipping (and in the Middle East by ro/ro). The most likely challenger on many routes is the modern multipurpose vessel — c o m b i n i n g costsaving series production with trading flexibility. Western shipowners and Third World national lines alike are confirming their faith in the future of these modern successors to earlier conventional tonnage by ordering them in large numbers. Will multipurpose ships succeed in halting the spread of container systems to the Third World? Or will the sceptics again be confounded (as they were by the rapid advance of containerization in the Western World a few years ago) ?

These and related questions are of great interest to investors, vessel operators and Third World port authorities and governments.

"Perspectives on Third World Port Development," the latest in a long line of studies from HPD Shipping Publications, examines the factors involved and seeks to provide some answers.

Part I of the study reviews current problems in Third World ports, including congestion which, while it has been most dramatic in OPEC ports, is proving to be more endemic and long-lasting in the ports of the poorer developing countries. Congestion, to which under-investment is a contributing factor, is matched on the other side by the dangers of investing in the wrong sort of port facilities or of committing large amounts of capital too soon—e.g., to specialized container terminals which may remain grossly underutilized for several years. Either mistake can have near disastrous consequences for a developing country's trade and economic development.

In Part II, the report goes on to compare the two main contenders for the deepsea general cargo traffic of developing countries— modern multipurpose shipping and fully cellular systems.

Semi-containerships (an intermediate l i f t - o n / l i f t - o f f shipping mode) are also examined. The significant features of each system are analyzed, including vessel characteristics and costs, compatibility with Third World trade flows, and drafts compared with depths of water in Third World ports. Port terminal requirements and costs are contrasted. One finding is that the level of containerizable traffic required to justify individual cellular services is considerably below that justifying investment in a specialized container terminal. The potential contribution of multipurpose berths, and other ways of bridging this gap—common in Third World ports—are assessed.

The report identifies the current stage of container terminal development in developing countries and reviews plans for further cient inland transport. Delays in returning containers to the port can easily make the whole system uncompetitive through their effect on the required box:containership slot ratio. Other factors, such as trade imbalances and consequences of containerization for port employment may be less of a constraint than is commonly supposed. The report contrasts the implications of containerization and multipurpose shipping for inland transport, dock labor and port planning and management.

Developing countries are frequently criticized for investing too much in national fleet development and not enough in improved port facilities. Part III of the study investigates the facts behind this apparent bias and reveals the crucial importance of the distribution of benefits from port investment. Most of the benefits from improved port facilities flow initially to vessel operators who may see cargohandling costs and turnaround times for existing ships reduced, or may be able to operate larger, more sophisticated vessels (such as containerships) as a consequence of the port improvements.

Developing countries may shun major port investment, with its sizable demands on limited capital resources and possible adverse effects on port employment, unless they are assured of a share of the overall benefits which the investment brings. This will principally depend on port pricing policies, the rate-making practices of liner conferences and market elasticities—all topics which are covered in this 90-page study, which concludes by suggesting how the right balance between general cargo ports and shipping investment can be achieved.

"Perspectives on Third World Port Development," No. 54 in a series of reports on various aspects of shipping prepared by the Research Division of HPD Shipping Publications, 34 Brook Street, Mayfair, London W1Y 2LL, England, is available at a single copy rate of U.S. $75, or on a subscription basis at U.S.

specialized f a c i l i t i e s . Another finding is the importance of effi- 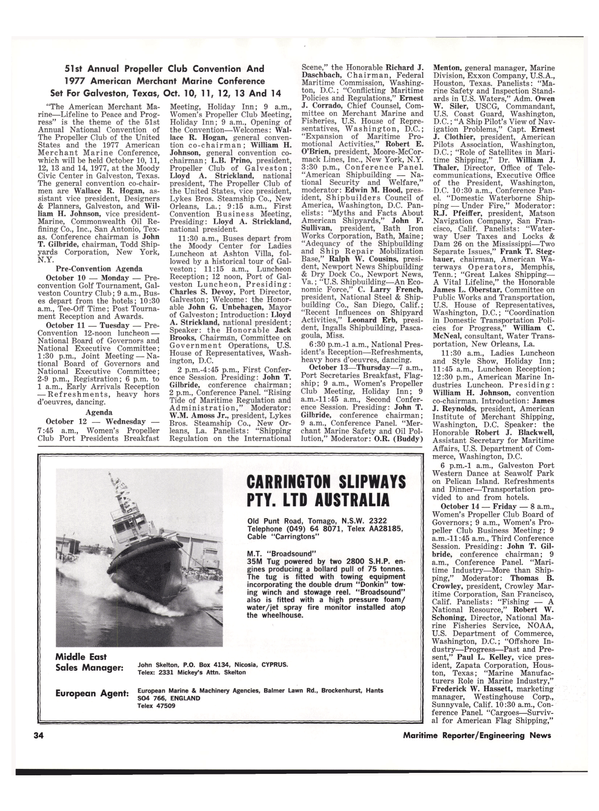