The annual meeting of the Pacific Northwest Section of The Society of Naval Architects and Marine Engineers held at "The Harrison," Harrison Hot Springs, British Columbia, Canada, the weekend of October 7-9, was attended by more than 130 members and guests.

The Section was honored to host Robert T. Young, national president of the Society, Mrs.

Young, and the guest speaker at the banquet, the Honorable Jack Davis, Provincial Minister of Energy Transport and Communications.

A buffet/dinner-dance and talent show on Friday evening was enjoyed by all. Door prizes were presented, and the talent show was successfully run by the master of ceremonies, Elijah Horner, vice chairman of the British Columbia Area Section.

On Saturday, the Executive Committee conducted a business meeting over a 7 a.m. breakfast.

Saturday morning's technical session was conducted by the Pacific Northwest Section chairman, who welcomed the Society's national president, Mr. Young. Mr. Young's opening remarks were mainly concerned with the difficulty experienced across the continent in obtaining and training ships crew, especially engineering staff. He stated that the majority of recent marine mishaps were caused by the inexperience of the vessel's personnel, and hoped that this would be remedied by a future program with incentives to attract the right people for a particular crew position. Furthermore, he concluded that a study carried out by a prominent environmental research group indicates the vast majority of the oil polluting the oceans was there through natural causes, such as oil seepage, and that oil tankers were responsible for only 3 percent of the total spills, of which about one-half of 1 percent were structurally related.

Mr. Talbot introduced Dr. Roy F. Hooley, P. Eng., professor, structural engineering, University of British Columbia, who made an excellent presentation of his technical paper entitled "Ship Vibrations." Dr. Hooley discussed and offered solutions to objectionable hull vibrations set up by wave action or, particularly, pulsating machinery and collision impact, both vertical and lateral, which deform the hull to a greater or lesser extent, depending on the type of vessel. He pointed out that in the case of a ship under design, calculations must be accurate and conservative to achieve relatively vibration-free results.

In the case of an existing vessel that has a vibration problem or a vessel that is about to be altered, actual measurements can remove much of the uncertainty and allow a simpler and more accurate calculation. Alleviation of vibration problems was discussed, particularly with respect to tankers, freighters, ferries, and trimarans, with emphasis on the fact that a knowledge of the natural frequencies is necessary to guard against the extreme amplitude of vibrations resulting from resonance.

Summarizing, in most cases it is necessary to have a mathematical model of the ship that will predict mode shapes and frequencies.

If the structural form of the vessel is simple and the beam analogy is applicable, the model can be simple, but as the structural complexity of the vessel grows, the size of the model must grow until a full finite element analysis is required. The properties of this model can then be changed to predict an efficient way of reducing vibrations. If the ship has already been built, field measurements can be taken and the model changed to duplicate them, allowing its use with greater confidence to predict the future behavior of a modified vessel.

Dr. Hooley illustrated his lecture with the use of blackboard, slides, and some very effective, simple, models. Discussers were Paul H. Diehl, Robert B. Grant, and Clair W. Wakefield.

The meeting was attend by 76 members and guests.

A copy of the paper is available from the Section librarian.

With the men busy at the technical session, the wives attended a sherry party in the hospitality suite. Saturday afternoon's recreational activities consisted of a golf tournament, curling bonspiel and bridge, with prizes presented by their respective organizers.

A banquet and dance was held in "Caesar's Forum," preceded by a congenial reception and cocktail hour. The Society president, Mr.

Young, addressed the dinner meeting and presented a certificate of appreciation to Dr. Hooley.

The guest speaker, the Honorable Jack Davis, welcomed the members from the United States, and delivered a timely speech directed toward the impact of the energy crisis on the marine industry.

Mr. Davis outlined the background of events and philosophies leading to international recognition of the general principle of the 200-mile coastal limit. The zones created within the limits come under national jurisdiction as resource management zones, including fishing and mineral exploitation, both on the seabed and under it. Thus Canada, with the second longest coastline in the world, has an enormous responsibility to effectively manage this huge area. Great opportunities exist in both Canada and the United States, particularly for offshore oil and gas exploration and development.

Mr. Davis stressed that marine transportation of crude petroleum is generally the cheapest means of moving oil, with the notable exception of certain pipelines, and that more than 50 percent of ocean tonnage is devoted to oil.

Thus, the impact of worldwide demands for energy will necessarily be reflected in activity in the marine industry. On the West Coast, energy r e q u i r e m e n t s in mid-continent will result in the construction of pipelines, and the effect of these projects, as well as the movement of oil from overseas to West Coast ports to feed into some of these pipelines, will be increased activity in the marine industry.

Mr. Davis concluded on a thoughtful note by stating that the members of the engineering profession are aware of environmental consequences of their work and, in general, respond positively to provide safeguards.

A china teacup and saucer were presented to each of the ladies, and door prizes were drawn, followed by an enjoyable evening of dancing. 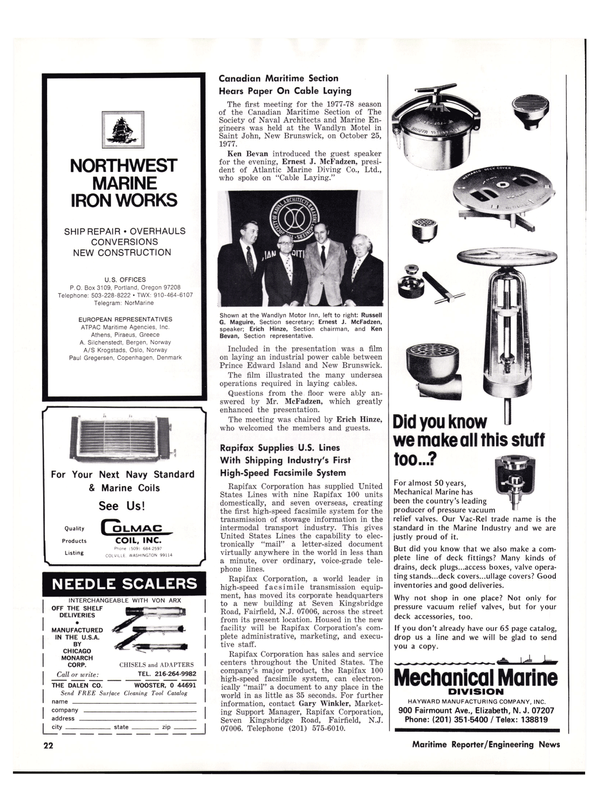