The Pacific Northwest Section of The Society of Naval Architects and Marine Engineers, and the Canadian Institute of Marine Engineers held their joint meeting recently at the Airport Inn Resort in Richmond, British Colombia.

Some 90 attendees heard Adrian Evans, vice president of Lackie Offshore Transportation, and Gregory Nordholm, vice president of Jensen Maritime, give a presentation titled "Modular Hydraulic Transporters and Their Role in Marine Heavy Lifts." Their paper described the engineering, planning, and special equipment utilized to transport and transfer several prefabricated modules, each weighing several hundred tons, from their erection site to a RO/ RO ship for shipment to Japan.

The movement was done in two steps—overland for several kilometers to a waiting barge, then by barge to the ship.

Mr. Evans described the unique design of the wheeled, hydraulically suspended transporter that maintains the module's clearance and keeps it essentially level by hydraulically compensating for grades and irregularities in the overland portion of the trip, and greatly facilitates transfer to the barge or ship over a simple ramp system by virtue of the transporter's ability to transfer its weight at a controlled rate and at the same time allow adjustment for differences in deck elevation.

William Watson, ship manager for Burrard Yarrows Corporation, delivered a presentation titled, "Maintenance and Operation of Panamax Drydock Facility," in which he explained the complexities of planning, preparation, and actual drydocking of a ship.

Mr. Watson's description of the actual workings of the drydock's ballast/deballast systems, its controls, hauling machinery, and block placement, and the close coordination required between the dock, the ship, and its tugs provided a valuable perspective on the many critical aspects of the drydocking operation, which, when done by professionals, gives the observer the impression that the routine operation of drydocking a large ship is a simple one, when in fact nothing could be farther from the truth. 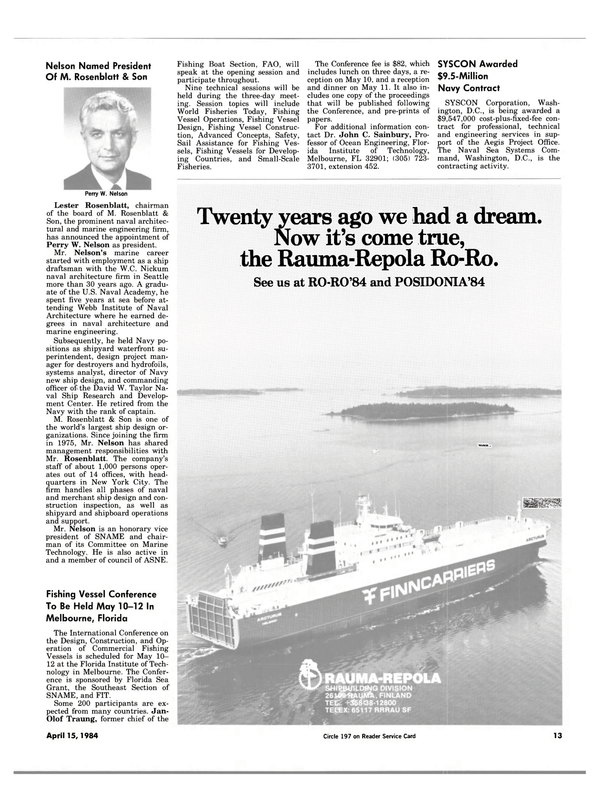