FEBRUARY 12-13, 1991, OTTAWA, CANADA Arrangements are being finalized for the Canadian Maritime Industries Association's 43rd Annual Technical Conference, which will be held at the Ottawa Congress Center and the Westin Hotel, Ottawa, Ontario, on Monday, February 11 and Tuesday, February 12, 1991.

Clarke. "This added feature has resulted in a tremendous interest in the conference, the largest technical marine conference held in Canada.

CSOE '91 will be a major component of the conference." Mr. Clarke pointed out that the technical conference's open sessions, which begin at 9 a.m. on February 12, will be presented in adjacent rooms on the Capital Hall level at the Ottawa Congress Center. The preliminary list of technical presentations is attached.

CSOE '91 will be located in the Congress Hall at the Ottawa Congress Center. Exhibitions such as CSOE '91 help bring together all interested parties in the marine industry.

Some 150 booths are available and it is expected that they will all be occupied.

Exhibition hours will be 10 a.m.

Mr. Clarke noted that the 1990 technical conference and exhibition (CSOE '90) attracted over 900 persons from across Canada and around the world, including international media and government officials.

TECHNICAL CONFERENCE PRESENTATIONS "Combined Propulsion Plants for Fast Vessels. Realization Through Advances in Diesel Technology," by a representative from MTU.

"Hybrid Propulsion for Oceangoing Submarines," by Carel A.

"NRC Hull Form Series for Surface Ships," by I. Datta and W.D.

"The Why, What and How of Ada Software Development," by Paul D. Hamilton, Paramax Electronics Inc. • 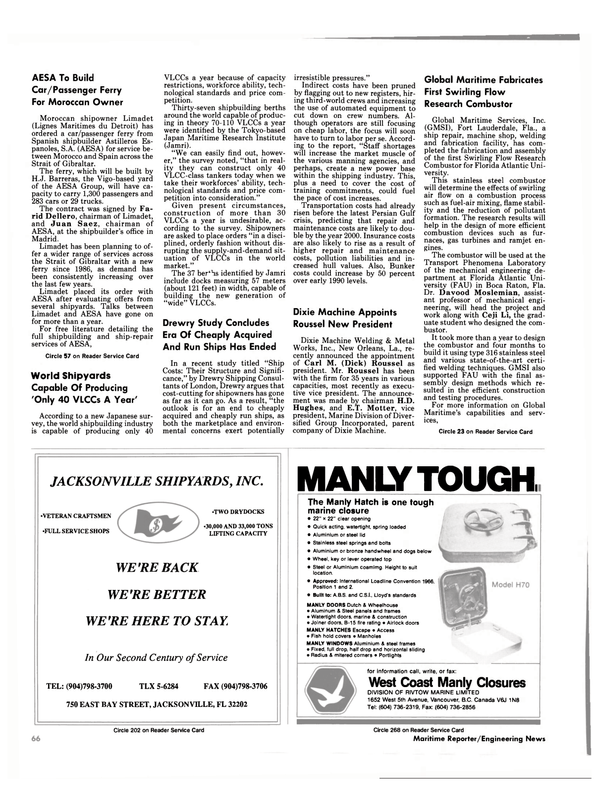