Owners, Operators, Suppliers Enter 1991 With Renewed Optimism Optimism is certainly the prevailing feeling among owners, operators, builders and equipment suppliers of the workboat fleet serving the Gulf of Mexico as they enter 1991. This renewed optimism can be traced in part to the belief that current supply vessel day rates, which are hovering around the $3,000 mark for a 180-foot supply boat, will climb to higher levels.

But, without a doubt, the domestic supply boat sector has improved markedly as compared with the midto late-80s. According to a spokesman for Offshore Services, which tracks rig and supply boat activity in the Gulf of Mexico, of the supply boats they track, 223 were working and 19 were idle, a 92 percent utilization.

Of the anchor handlers the company tracks in the Gulf, 30 of 35 were employed, or 85 percent.

"The oversupply of boats in the Gulf has been solved by a number of fleet consolidations, equipment being moved to other sectors and conversions for the fishing and passenger markets," said Tom Marsh of Offshore Services.

The present domestic supply boat fleet reportedly stands at about 280, discounting crew, utility and small supply vessels. Most vessels are on term charters, while still others effectively work the spot market.

Oil & Gas Rental's supply boats will be built at Trinity's Halter-Lockport yard at costs in excess of $5 million each. The Oil & Gas Rental boats, intended for production support, are scheduled for delivery in June 1991. Since this initial order, Trinity Marine received a follow-on contract from Oil & Gas Rental for an additional boat.

Oil & Gas Rental's order spurred both optimism and speculation that offshore vessel industry giants Tidewater and Zapata would soon follow suit. However, Tidewater officials restated their plans to only consider fleet replacements until day rates topped the $4,500 mark in the Gulf.

Over the past several months, in fact, Tidewater Marine has increased its fleet by acquiring existing support vessels. The New Orleans- based boat owner acquired 10 support vessels and one supply boat this past summer. All the boats are now part of Tidewater's West Coast fleet off California. Last fall, Tidewater acquired two 110-foot aluminum crewboats and one 110-foot utility vessel for use in the Gulf of Mexico.

Houston-based Kilgore Offshore also contracted with Trinity Marine to build a single 202-foot supply boat with an option to build three more craft.The order is for a new Trinity design, the Economax, which offers high capacities for liquid and dry mud and increased cargo space.

Each boat will have a total capacity of 2,000 bbl of liquid and 7,200 eft of dry mud. Construction began late last year and delivery is scheduled for September 1991.

The rapid expansion of the Trinity Marine Group has meet with great success. Most of the shipyards in the group, all of which are based in the South except HBC Barge, have a 12-month backlog.

"We are always looking for new acquisitions if the price is right," said John Dane III, president of the Trinity Marine Group. "We intend to expand when the market and prices are right. At present a lot of operators, particularly in the offshore market, are putting off decisions about new construction because of the Iraqi situation. Once things get settled there, we could be in for a rush of new construction, but we hope this time we can learn from the lessons of the last oil crisis.

We want expansion, but this time we want it to be slow and steady." Mr. Dane is confident that the group will be able to land at least ten of sixteen 220-foot oil pollution control vessels currently being bid by the government.

Another major project underway at Trinity's Halter Marine-Moss Point, Miss., shipyard, is the construction of a huge $50-million dustpan dredge for the Army Corps of Engineers.

Jennings, Louisiana-based Leevac Shipyards delivered a new 200-foot, 3,O00-hp supply boat to Sea Mar Operators, Lafayette, La., in mid- December. Leevac began the construction of the vessel in 1982, but halted construction when a buyer could not be found.

In a similar delivery, Candy Fleet, Morgan City, La., purchased two 180-foot supply boats from Houma Fabricators, Houma, La., for $2.5 million each. Construction of the boats had begun in the early 1980s, but was halted because of the downturn in the market.

"There has been a definite increase in activity the last year, year and a half, in oil-related construction," said Scott Tibbs II, general manager of Gulf Craft, Inc., Patterson, La.

"About 80 percent of our business has been from that sector," he said.

Gulf Craft has four crewboats on its ways. The vessels, three of which are for McCall Enterprises and one for Offshore Oil Services, vary in length from 160 to 130 feet. The company has orders for two other crewboats in hand.

Galveston Expects Rise In Activity Galveston Shipbuilding Company, Galveston, Texas, located at Intracoastal Mile 355A, is projecting increased demand for their services in the 1990s. The 24-year-old marine repair and construction yard developed and built some of the nation's first double-skinned ITB units. The owners, the Fiegel family, see their yard's experience in both barge and repair and new construction techniques, including its ability to retrofit single-skin vessels, as a valuable resource to barge operators.

Bollinger Machine Shop & Shipyard, Inc., Lockport, La., reports it experienced growth in all areas during 1990 and expects a continuation of that growth to last through 1993. During the last 12 months, the yard produced three 130-foot lift boats for Gulf operation.

With two separate yards located along the Intracoastal Waterway, Quality Shipyards, Inc., of Houma, La., is able to provide direct access to the Gulf of Mexico. According to new company president J im Crawford, Quality is in the process of negotiating contracts for fish boat conversions for a domestic West Coast operator.

"Activity in the repair and conversion market, in particular, is on the upswing," said Mr. Crawford.

"There seems to be a definite upward trend in the vessel repowering market as well. We are looking forward to the resumption of new construction of offshore vessels in the latter part of 1991, after the Middle East situation is settled," he added.

Quality Shipyards recently completed two major repowering projects for domestic owners. The work for Hunter Marine Transport involved the repowering, refurbishment and modernization of a river tug, which was refitted with an EMD engine. The other project was for Brix Maritime which involved a Caterpillar repowering.

The contract is an outgrowth of new legislation permitting riverboat gambling in the state of Iowa.

Colette Murray, marketing director for Freeport Shipbuilding & Repair, said, "We are extremely busy. We have had several inquiries about riverboat gambling vessels.

I am very optimistic about the future." The Freeport, Florida, yard has four vessels in various stages of construction. Two, a 110-foot private steel yacht for a Texas owner and a 65-foot paddlewheeler for a New Jersey owner, are scheduled for delivery this month.

Since resuming operations in August of last year, the Jacksonville facility has completed a number of repair jobs for major ship operators.

Other Southern yards, particularly Bender Shipbuilding & Repair in Mobile, Ala., and Eastern Shipyards, Panama City, Fla., have also been busy as of late with a number of extensive conversion and repair projects in the commercial fishing, passenger, and Navy sectors. Eastern Shipyards is constructing two molten sulfur tankers for the U.S.- flag fleet and recently completed a major conversion of a 308-foot Circle Line dinner boat, the nation's largest.

On the commercial side, Avondale's Boat Division, Westwego, La., and Harvey Quick Repair, located at Harvey, La., have been the beneficiaries of inland waterways work.

Suppliers Benefit As Well With the rise in construction activity, the fortunes of equipment suppliers to the yards improved as well. Karl Senner, Inc., for example, supplied two Reintjes model WAV 4450 reverse reduction gears, 4.75:1 ratio, with internal hydraulically actuated propeller shaft brake for the Caterpillar-powered towboats under construction at Avondale.

Another Southern equipment supplier, Marine Gears, Inc., benefited from the resurgence in construction and repowering activity.

"There has been a pick-up in activity," said Kyle Haley, vice president and general manager of the Greenville, Miss., company. "Nineteen- ninety was a good year, but potentially, 1991 can be absolutely tremendous," stated Mr. Haley. "We have as many bookings in January 1991 as we had in all of 1990." Marine Gears, Inc. was involved in supplying a number of new construction and repowering projects.

According to Dave Hackney, vice president, Robertson Marine Systems, Inc., Metairie, La., his company started to see a dramatic increase in sales last summer. "Our sales began to rise dramatically in July and August of 1990, primarily for the offshore industry," he stated.

The three supply boats ordered by Oil & Gas Rental Services from Trinity, for example, will be fitted with Robertson's DP with joystick capability.

According to Bill Hidalgo, vice president and general manager of Oil & Gas Marine Service, a subsidiary of Oil & Gas Rental Services, the new generation supply boats will be capable of operating along side deep-water platforms and floaters for extended periods without having to anchor or tie off to the structure.

Other orders garnered by Robertson Marine Systems include a joystick installation on the Kilgore newbuilding at Trinity, as well as several DP and joystick installations on oilfield boats for Edison Chouest Offshore, Tidewater Marine and an unidentified Morgan City, La., offshore company.

Robertson Marine Systems equipment will also be fitted aboard a 300-foot icebreaker under construction at North American Shipyards, Larose, La., the U.S. Navy vessel Thomas C. Thompson (AGOR-23), being built by Trinity Marine, and the R/V Melville (AGOR-15), which is undergoing a midlife conversion at McDermott Shipyard, Amelia, La.

According to Ralph Lindfors, vice president and general manager, for the Mandeville, Louisiana-based firm, the marine industry accounts for about 50 percent of the company's business. Some notable company projects included the supply of $300,000 worth of modified marine motor controls for four YTT boats built at McDermott, as well as miscellaneous equipment for the Knorr and Melville midlife conversion work.

In the inland market, Con-Select supplied a marine generator control distribution switchboard for a Corps of Engineers crane barge built by NABRICO, as well as smaller switchboards for refueling barges at the same yard.

Pyrotechnics, emergency rations and drinking water, life ring buoys and thermal protective aids are just a few of the items that are available from one of the company's three locations: Kinder, La.; Jacksonville, Fla.; and Miami, Fla.

With the opening of its new headquarters, Datrex Inc. is now able to provide comprehensive coverage of the U.S. Southern yards with greatly enhanced customer service. 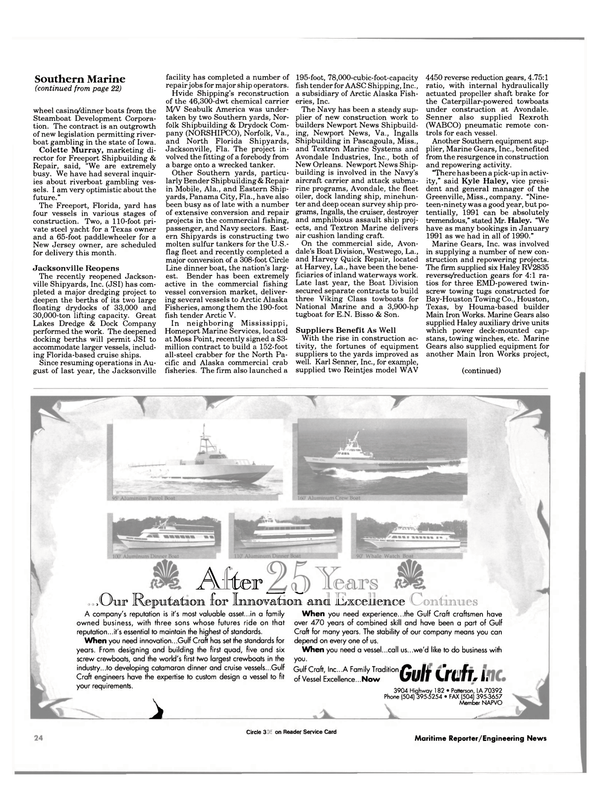